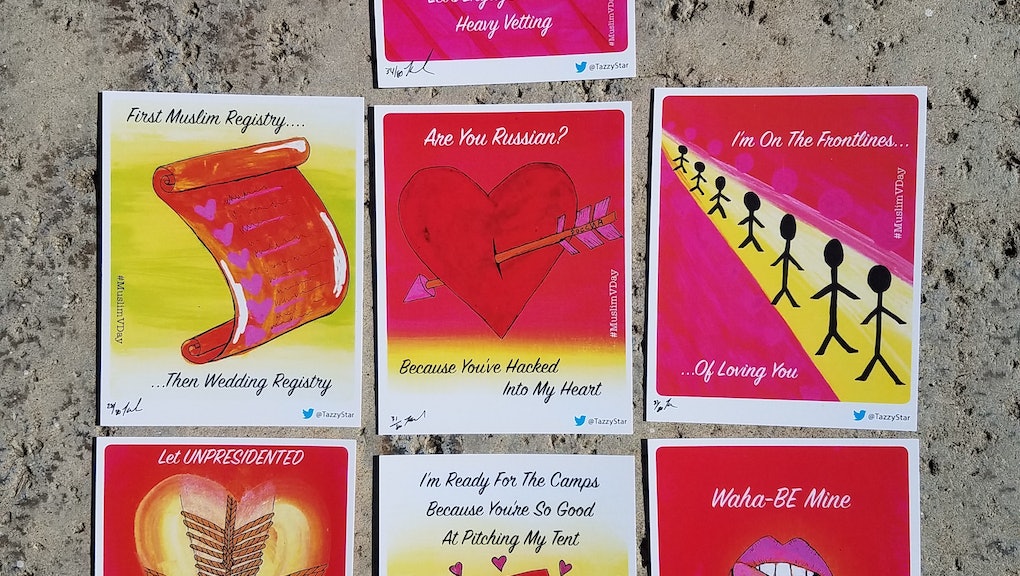 There are several strategies activists are using to resist President Donald Trump's administration — calling representatives and senators, staging marches and workshops are a few ways, but one Los Angeles-based artist is taking an unorthodox approach: Valentine's Day cards.

"I'm ready for the camps, because you're so good at pitching my tent," one card read.

Ahmed expects nervous chuckles from people when they come across one of the cards.

"I hope these cards disrupt how people think about Muslims and make them feel uncomfortable," Ahmed said. "It's not 'too soon.' The time is now. This is the time to force people to feel uncomfortable and know the feeling of discomfort Muslims have constantly."

Ahmed started making Muslim-themed cards in 2012. After a hiatus in 2015, Ahmed resumed making cards after witnessing Trump win the presidency and go forward with his anti-Muslim proposals.

"Muslims were the number one punching bag this election cycle," Ahmed said. "From all of the anti-Muslim political rhetoric that was happening...there was too much fodder for me not to use."

Ahmed certainly didn't hold back any punches with these cards. All seven cards have puns taking jabs at Trump's "extreme vetting" of immigrants, proposal for a Muslim registry and go as far the comparison Trump surrogates made with the Japanese-American interment camps..

"We have a fascist president who wants to ban all MuslimS and put them in a registry," Ahmed said. "I am a big proponent of using art and poetry to resist Trump's repressive regime. These cards are resisting while also being creative and thinking out of the box."

Ahmed said that while it's important to resist in the more conventional methods, it's imperative for activists and citizens to push back in all possible ways.

"I've been reflecting on the more traditional forms of resisting, like calling your congressman, but we need to resist every way possible — whether that's through sending these cards, the shirt you're wearing or the conversation you're having with another person," Ahmed said. "We need to resist through any means necessary and I hope this is a tool people use this Valentine's Day.

Some may find Ahmed's cards uncomfortable or see their tactics as silly, but here's what the artistic activist has to say about that: "When you live in a society so absurd, sometimes you just have to be absurd to survive."