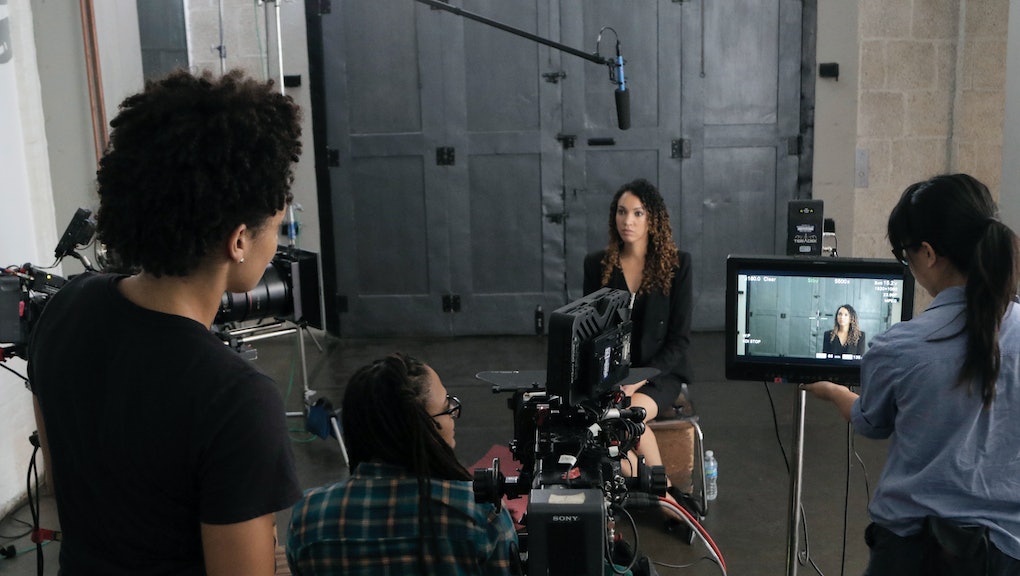 To say that Kira Kelly's career began with a meeting at the frozen yogurt chain Pinkberry would discount years of hard work. But it didn't hurt that the meeting was with an Oscar nominee who just so happened to be a fellow black female director: Ava DuVernay. After all, it was the willingness of other talented women to lift her up that helped Kelly in a male-dominated industry. In a phone interview, she said DuVernay had seen her cinematography on documentaries and TV shows and wanted to hire her for a new project.

"Of course I knew who Ava was," says Kelly. "We followed each other on Twitter and Instagram, but I never expected to get an email from her assistant saying she was interested in meeting me."

When that project fell through, DuVernay brought Kelly on board for 13th. The opportunity to work on the documentary about the mass incarceration of black people in America came after years of paying her dues. As a young black woman, making it in Hollywood has required grit. Only after years of moving up through the ranks could she then become a sought-after cinematographer.

Of course, the journey has not been easy. Kelly admits that becoming a DP is a challenge for any woman, but especially so for a woman of color. According to the Center for the Study of Women in Television and Film at San Diego State University, 95% of the top 250 grossing films released in 2016 had no female cinematographers. The statistics for women occupying other high-level jobs behind the camera are almost as dismal. In that same year, the center reported that 93% of films had no female directors, 87% had no female writers, 66% had no female producers and 83% had no female editors.

The numbers for women of color working in the film industry are even smaller. In a study published by University of Southern California's Annenberg School for Communication and Journalism, only 53 of the 407 directors in charge of big-budget movies and TV shows released in 2014-2015 were people of color. Just two were black women — Ava DuVernay and Amma Asante.

Put another way, Kelly belongs to an elite group of women who have hustled hard to become Hollywood DPs. That hustle began before she even had her diploma in hand.

"When I was in film school at Northwestern, I couldn't have told you what a director or a DP did," says Kelly. "Then I found my way into the lighting department on this one shoot [while I was still in college.]"

After graduation she went into overdrive. With a camera in her hands, she practiced as often as she could.

She added, "I started working non-union shoots in New York, as many as I could."

Kelly didn't immediately get to call the shots as a director of photography. In fact, she didn't even start in the camera department. While working on the set of music videos, she began where many cinematographers-in-training do: in the electrical and lighting departments. She believes that the connections she made in those departments helped cement her career.

"I met the best boy electric, seriously the best best boy I ever worked with," says Kelly. (In film production, a best boy is the assistant to the gaffer or key grip in the electrical or lighting departments on set.) "She brought me on all these other shoots. Sometimes we were working full-on, all-women electrical teams."

However, that was not usually the case. The music video crews she worked on were mainly comprised of Black and Latino men.

"I didn't realize it at the time, that sometimes all the crews were all men. Other cases, all people of color. It was such a norm for me then. Maybe it was something different, but I don't think I really noticed the difference until I moved to LA," she says.

That's when she noticed a clear shift in the demographics of her co-workers. As Kelly ventured into Hollywood, she often found that she was the only black woman or the only woman of color on set. Instead of letting that fact intimidate her, she tried to find other women, especially women of color. She recommends that women who dream of becoming directors of photography or working other behind-the-camera jobs do the same.

"Find your tribe. Find people who support you," she says.

She admires DuVernay for "keeping the door open," as she puts it. She explained that with DuVernay's reputation and acclaim, the Oscar-nominated director could've stopped trying to elevate other women.

"She could've easily said she was done," says Kelly. "Instead, she asks, 'Who can I bring with me?'"

It's because of women like DuVernay (and though she was too modest to admit it, Kelly) that girls and young women can dream of working behind the camera.

"A young black girl suddenly sees she can become a director or a DP," says Kelly.

That's not to say that sexism and racism won't ever be concerns. Kelly remembers when her boss sent her up to a small, enclosed space to hang lights with a white male colleague she was meeting for the first time. He joked to Kelly's boss, "If you send her up with me, she'll come back down pregnant."

"In the years since then, I've come up with so many comebacks," she says. "But back then, I didn't say anything."

She adds that she doesn't think such blatant harassment happens so regularly today (at least not without someone getting fired). She also doesn't want such stories to discourage women from following their dreams.

"How do you fortify yourself? Protect yourself," says Kelly.