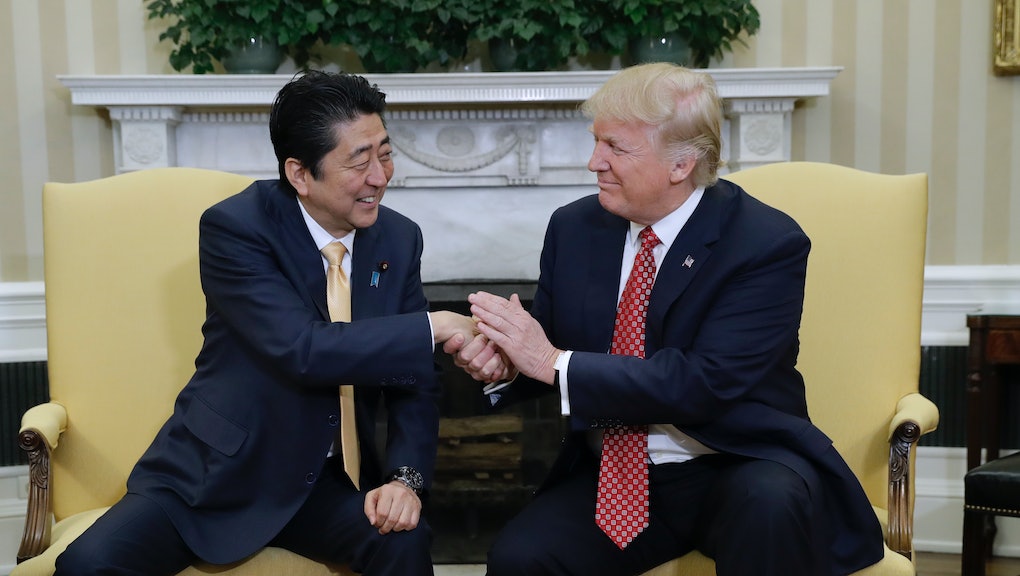 President Donald Trump welcomed Japanese Prime Minister Shinzo Abe to the White House on Friday in the traditional way: with a firm handshake followed by a playful slap on the hand, followed by an even firmer handshake, followed by a few seconds of uncomfortable, unbroken eye contact.

It was as weird as it sounds.

While the average media consumer might have seen the interaction as fodder for the Friday news cycle, body language experts saw it as something more telling.

Karen Bradley, head of the master's dance program at the University of Maryland and a specialist in movement analysis, said Trump's handshake etiquette is a sign of his "total lack of cultural intelligence [and] social skills."

"The handshake is not only awkwardly long, it contains the usual pull towards himself that characterizes Trump's worldview," Bradley said. "All flows towards him. He literally sucks in the room and everyone in it."

This "alpha male" approach, Bradley said, is a two-sided coin. While it's exactly the quality that compelled millions of Americans to put their faith in Trump's vision for the country — remember him wielding the same machismo to shut down "Little Marco" Rubio and silence Jeb Bush during the presidential debates? — it may also be interpreted as a sign of disrespect to visiting heads of state.

"The patting seems appropriative and status-defining and is part of his dominating attitude, but it is the fact that he holds on too long and pulls the hand of the other into his own sphere that indicates his social transgression," she said.

Bart Rossi, a political psychologist, said the extra pat Trump does with his left hand is actually a narcissistic tendency.

"It is egocentric in that he is making more of the handshake to enhance himself and make himself look extra good," Rossi said. "Trump loves to exaggerate and attempt to make everything look wonderful for himself. In short, it is a good example of how he can further self-promote himself."

Though Abe seemed visibly uncomfortable in the immediate aftermath of the handshake, the Japanese prime minister is scheduled for a weekend of meetings and golfing at Trump's Mar-a-Lago resort; hopefully, the rest of the weekend is smoother sailing.