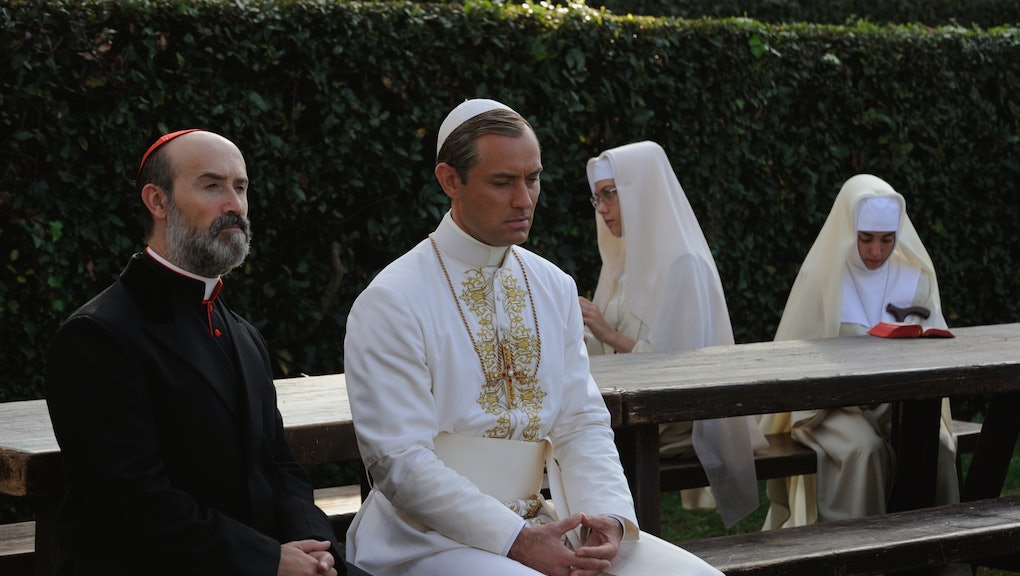 How does ‘The Young Pope’ end? Good question!

After 10 episodes of amazing memes, kangaroo whispering and smiting evil nuns to death with prayer powers, The Young Pope has ended. I know, it sucks. It feels like only yesterday Jude Law blessed our lives with his undeniably entertaining portrayal of a youthful pope with controversial conservative views. This pope polarized Christians and members of the Vatican alike and left us viewers in a similar state.

So naturally, the show's ending is just as befuddling. Seriously, we don't even know if Pius XIII literally died, which may or may not depend on whether The Young Pope is renewed for a second season (given how popular it is in Europe, it's quite likely). Forgive me Father, there are questions abound.

So a quick recap of The Young Pope season one finale. Sister Mary is leaving the Vatican to work with children in Africa — these are the kids who were being mistreated by an evil nun before Pius prayed her to death. Monsignor Gutierrez will be the new personal secretary for Pius, taking her place. Cardinal Voiello is sad that Sister Mary is leaving — they're infatuated with each other, a narrative I wish the show decided to explore further.

As for the controversial New York case with Archbishop Kurtwell, well, Pius has dealt him a suitable punishment for sexual abuse. He will be sent away to a remote Alaskan village (the same one Pius punished another cardinal with earlier in the season), probably to deliver services until his fingers fall off from the cold.

Pius decides to make an address at St. Mark's Square, where he's finally willing to reveal himself to the public for the first time. Imagine if you're a devout Christian in The Young Pope, and for an indeterminate amount of time — but at least a year, most likely — you haven't seen what your new pope looks like, only to find out he has the face of Jude Law. Yeah, that's the type of reaction he gets from the crowd.

He delivers a beautiful homily echoing the words of a Guatemalan woman who was a saint in her own right. The crowd smiles, a rare sight because Pius has typically been a huge asshole. Case in point: Earlier in the episode, he made a group of third graders cry because it was raining by saying it was because God was upset with them. He's great with kids.

The reason he's so charming with children stems from his childhood — or, if you ask him, a lack thereof — when he was abandoned by his parents. Amazingly, that's the main reason he gives the speech. He suspects that his long-lost parents will be there when he gives the address, and after a raucous response from the crowd, Pius takes out a toy telescope Gutierrez purchased for him at a service station. So he begins probing the crowd to find his parents, and he does.

At least, he might've. The Young Pope has had a few scenes where it's blurred the line between reality and trippy-AF illusions, and Pius actually seeing his parents in the crowd could really go either way. If they were real, though, they shaded Pius hard by leaving after he saw them. They didn't even smile at his smile-worthy speech.

This metaphorically, and perhaps literally, breaks Pius' heart, as he collapses in the hands of Gutierrez and the other cardinals. He looks toward the sky, where Jesus forms amongst the clouds. Then we get a wide shot of St. Mark's Square, followed by the entire city, the continent and eventually, the world. Then the series' title flashes on the screen followed by "The End."

Ladies and gentlemen, this has been HBO's The Young Pope.