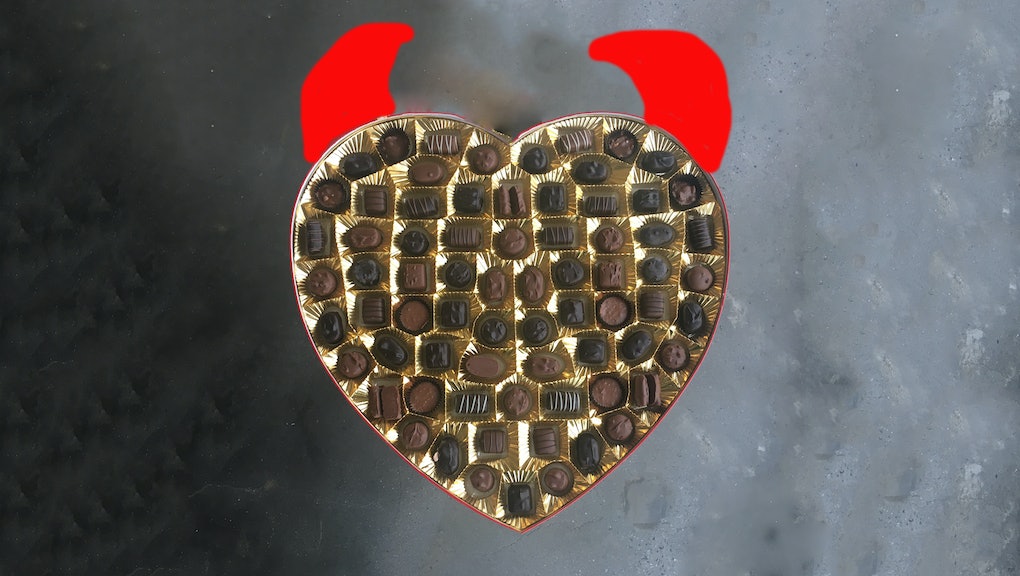 Whether you are in love, in lust or in a consciously uncoupled state, there's no better Valentine's Day activity quite like indulging in some chocolate. (Conversation hearts may be colorful and sometimes funny, but everyone knows they taste like chalk.)

The candy aisle of pharmacies overflows with heart-shaped confections but no seasonal Twizzler pack or bundle of red Hershey Kisses is any match for the XXL heart-shaped chocolate boxes that sit, appropriately, on the top shelf. Behold the glory that is one such box: the 42-ounce box of "assorted fine chocolates" from Russell Stover.

Lifting it off the top shelf from where it was perched at a pharmacy, I staggered to grasp the gargantuan box. It clocks in at 2 pounds, 10 ounces but the box is larger than a beach ball. No bag at the convenience store was big enough to transport its greatness — which set me back $43, by the way. Even massive amounts of drugstore quality chocolate don't come cheap.)

The box contains 37 servings — equivalent to two pieces of chocolate per serving. With 74 pieces of mystery-filled chocolates in the box, you could eat one piece a day from Valentine's Day until April 28, President Donald Trump's 100th day in office.

But if you decide to binge on the whole heart in one go, you'd be in for a stomachache of epic proportions. Here's what's in store:

Please attempt to digest the fact that the XL heart-shaped candy box contains 666 grams of sugar. Aka the devil's number. As in, maybe eating all 74 pieces of chocolate will turn you into constipated creature that's incapable of love. But actually: eating fatty, sugar-dense foods has been linked to constipation, and a stopped up person will not, in all likelihood, be in the mood to get it on with their beloved.

Even more, eating excessive amounts of sugar can result in a sugar crash that leads to feelings of irritability, depression and anxiety. Not exactly the kind of mood you'd want your gift to evoke in a significant other, eh?

And boy, this heart-shaped box serves up a hefty lot of calories: 5,550 calories is equivalent to the amount in almost 10 McDonalds Big Macs.

Maybe the box containing 666 grams of sugar is all a subtle message from the Valentine's Day gods above (Hallmark, what's up?) that the day of celebrating love and monogamy and shaming single people is really just the devil's work in disguise. Who's to say, really?

The psychology of giving big

Gift giving is a way for people to show they care about one another, and psychologists say it's an important way for humans to bond. Studies show that gifting releases oxytocin, a hormone linked to feelings of love and trust.

A comically large box of candy doesn't exactly seem like the glue that's strong enough to hold a relationship together, though. The large size might be a reflection of self-esteem issues, in fact.

Those who tend to be overly generous with gifts might be people pleasers, psychotherapist Jonathan Alpert told Lifehacker. Studies have found that people are more likely to buy luxury goods because spending money can soothe a "bruised ego," Time reported.

"[Over givers] think they have to rely on giving to be seen in a positive light," Alpert said. "It’s usually people who feel that they don’t have anything to offer a friend beyond their wallet."

Trying to connect with others by being extremely unselfish and generous can backfire, it turns out: Receivers of expensive gifts might feel guilty if they aren't able to reciprocate, Lifehacker noted. If anything, guilt probably tastes something like 666 grams of sugar.

Want to avoid the devil's chocolate and give a gift that will impress the pants off anyone you love? Experts' recommendations are actually pretty unsexy. Studies found that people prefer simple, practical gifts or ones that they explicitly ask for over expensive ones that took a lot of effort, Scientific American reported.

By this logic, you should therefore ask your beloved what kind of chocolate they like best instead of buying them any old assortment like the enormous box. Life might be like a box of chocolates, but nobody wants to suffer through pretending to like the "molasses chew" in an oversized drugstore gift.