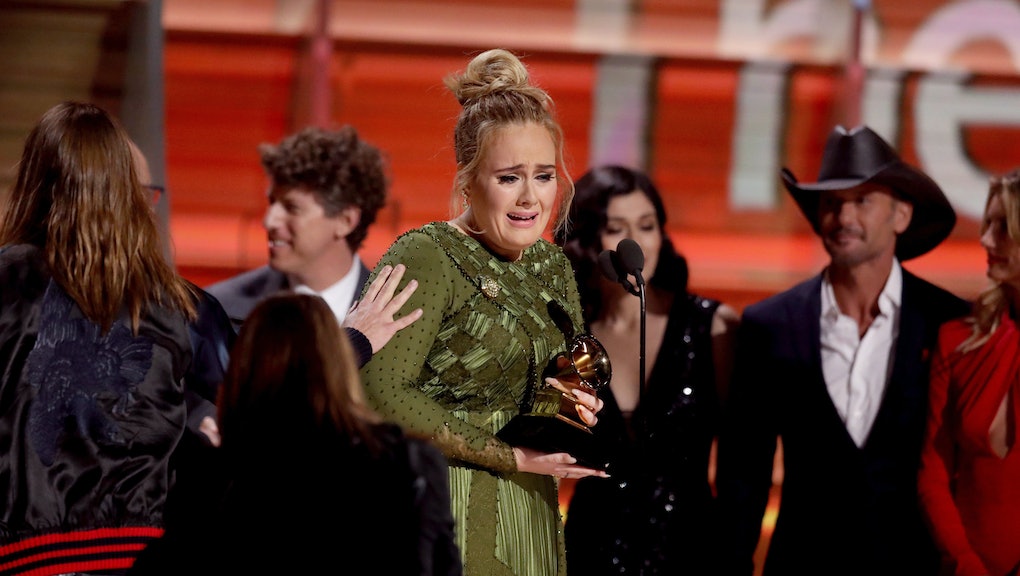 The Grammys just made it crystal clear: It values music that is plain, safe and white.

The scene was not new: Sunday night's Grammy Awards were winding down with just the major awards left to give. Beyoncé was up yet again for album of the year and record of the year, for Lemonade and its lead single "Formation" respectively, two awards that have continued to elude her despite her being the second most awarded woman in Grammy history. And yet again, the awards went to a white artist.

Adele's "Hello" won record of the year, and 25 took home album of the year, reaffirming the Grammys' unquenchable thirst for music that's plain, safe and white. Even Adele seemed to disagree with the Grammy voters.

"I can't possibly accept this award," Adele said. "My artist of my life is Beyoncé and this album for me, the Lemonade album, was just so monumental ... all us artists here adore you. You are our light."

Beyoncé's Lemonade went into the night a critical favorite by far, but every time it went up against Adele's 25, it lost. Adele's "Hello" took best pop solo performance over Beyoncé's "Hold Up;" it also took song of the year over "Formation," making for a clean sweep for Adele.

The Lemonade visual album — arguably the most powerful aspect of Beyoncé's release, and a film widely hailed as one of the most ambitious and profound creations in that medium — was beat out by a Beatles tour documentary for best music film.

We've seen this special brand of erasure year in and year out at the Grammys. For the past eight years, white artists have taken the show's album of the year award over black artists. In a recent Tumblr rant defending his decision to boycott the ceremony, Frank Ocean cited Taylor Swift's 2015 win over Kendrick Lamar as evidence of the Grammys being a "faulty" award show moment. Defending her sister Sunday night, Solange tweeted Ocean's post with the brief caption "wuddup frank."

Adele's win simply reinforces the norm and provides even further proof that Grammy voters have trouble recognizing quality black art. Her apology on their behalf wasn't even new either. Back in 2014, white rapper Macklemore apologized to Kendrick Lamar via text message for beating him for best rap album. "You got robbed," Macklemore wrote in a shared screenshot of their conversation. "I was gonna say that during the speech. Then the music started playing during my speech, and I froze."

The more safe, radio-friendly and white, the better chance an album has of taking home a golden gramophone. Despite her cheeky, foul-mouthed charm, Adele is the perfect picture of this ideal. Her music killed on the radio and in the sales department but failed to wow on the critical front.

"25 delivers the kind of timeless vibes people have come to expect from Adele, even though the first-person narratives in her songs often still feel oddly generic," Spin wrote in a line that speaks volumes.

"Generic" is the key word here. White artists specifically win by playing into the classic look and sound of a pop star who can appeal to the widest majority possible, which for decades has been young — and old — white people. The fact that Beck snagged 2014's album of the year with Morning Phase over Beyoncé's ambitious self-titled opus, lends itself well to this point. The rest of his catalog is half comic, half earnest amalgam of white-boy hip-hop and funk — not Grammy material in the slightest.

As soon as he started sounding like a sensible coffee-shop artist though, the Grammy acclaim rolled in. That year, Kanye West took the stage in the middle of Beck's speech to make a statement about the award show "diminishing art and not respecting the craft."

The Grammys largely seems to judge fame by radio play, which notoriously supports artists whose work sounds derivative of hits that have come before. It is the best way to guarantee a hit after all. But it encourages stagnation. It encourages mimicry, which is why we see the rise of groups like the Chainsmokers, who earned three nominations, essentially launching a blockbuster career with a hit ripping off sing-song rapper Fetty Wap.

Part of the reason for this continuing underappreciation of boundary-pushing black art and black artists likely comes from the makeup of the Grammy voting academy. In a 2014 piece for Complex, journalist Rob Kenner wrote that the "vast majority of the nominations are chosen by people who have little real expertise in a given field." He added: "Famous people tend to get more votes from clueless Academy members, regardless of the quality of their work," citing two prototypically black genres, hip-hop and reggae, as two of the least representative categories.

Until the Grammy committee shakes up its voter base, the way the Oscars did in response to #OscarsSoWhite, or finds a way to familiarize its voters with what's hot and necessary in the genres they have to judge, we'll likely continue to see snubs like this. Each year, the Grammys feel that much less essential, that much more like a false and whitewashed historical record.