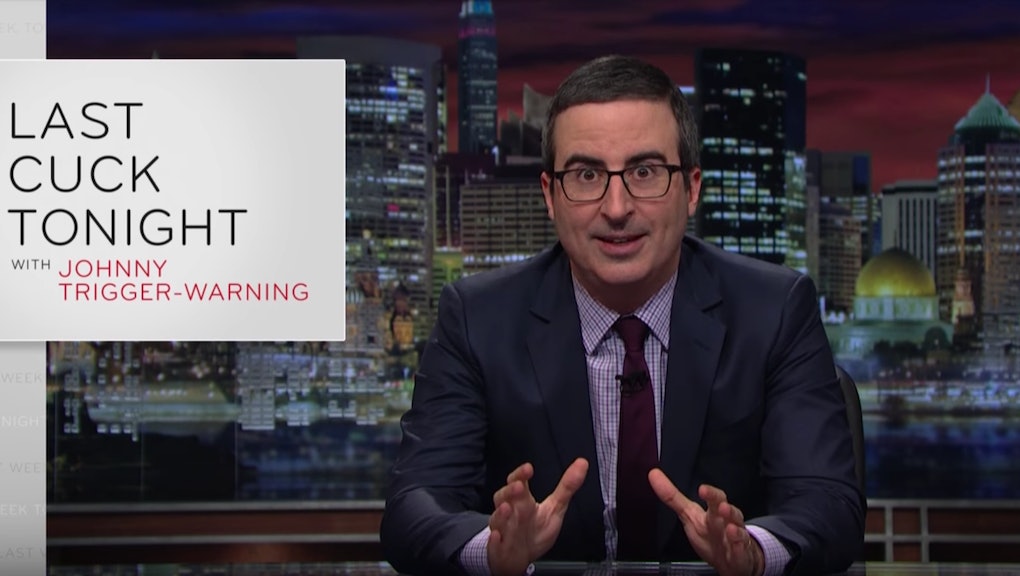 John Oliver's Last Week Tonight returned Sunday night after a three-month hiatus. While his show's calling card is comprehensive segments on niche topics like net neutrality and chicken farming, he'd be remiss not to talk about what's happened since he's been off the air — mainly, Donald Trump and the controversial early days of his presidency.

"And before we go any further, 'Donald Trump lies' is clearly not a fresh observation," Oliver says. "Liberals are probably thinking, 'Wow, hot take there, Johnny. Next you’re going to tell me that Obama is aloof, Dick Cheney is evil and Paul Ryan doesn’t climax until he checks his Fitbit to see how many calories he’s burned from fucking.'"

Oliver breaks the issue down to four main questions: How could someone like Trump become president? Where do the lies come from? Why do so many Americans believe what he's saying? How can the spread of false information be stopped?

Oliver notes that it appears that Trump gets a lot of his information from cable news. For example, just 15 minutes after Fox News labeled Chelsea Manning an "ungrateful traitor," Trump tweeted about Manning by calling her an "ungrateful traitor." Then there was the video of Trump on Air Force One while a catchy carpet commercial jingle was blasting in the background. Dude loves his TV.

But Trump also gets his facts from places like Breitbart and InfoWars, the latter of which spotlights a man that feeds on conspiracy theories — like the Sandy Hook massacre being a government hoax — and has had Trump interviewed on his show.

"If you get your news from similar sources to him — as many, many, many people do — he doesn't look like a crank," Oliver adds. "He looks like the first president ever to tell you the real truth."

False information presented as truth has real consequences when it becomes policy. "Real people get hurt when you make policy based on false information," Oliver says. "Billions will get spent on a wall that won't work, to prevent a crime wave that isn't happening, while refugees sit in dangerous situations to prevent Bowling Green-style massacres that never took place."

Oliver's solution to target the information getting to Trump is rather genius: He's purchased advertising on morning cable news shows in the D.C. area on Fox News, CNN and MSNBC. These commercials — which Oliver teases on Last Week Tonight — will be in the guise of medical commercials before the spokesperson begins laying out facts about nuclear weapons, the unemployment rate and Tiffany Trump's name.

"We all need to commit to defending the reality of facts, but it’s going to take work," Oliver says. Well, this was a good — and entertaining — start.