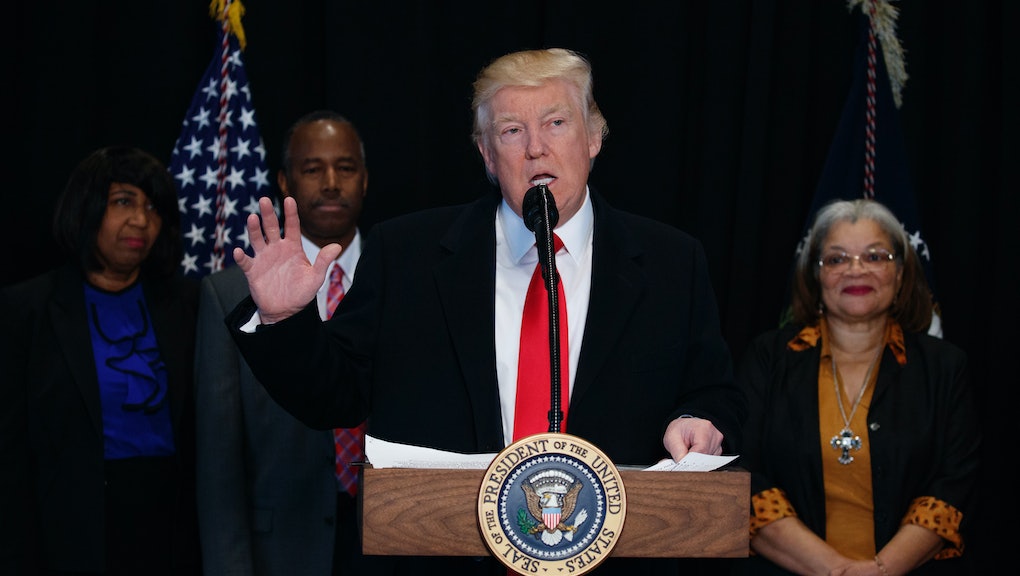 After a wave of bomb threats targeting Jewish community centers across the country and the desecration of a Jewish cemetery in St. Louis on Monday, President Donald Trump finally denounced anti-Semitism on Tuesday during a visit to the National Museum of African American History and Culture.

During the visit, NBC's Craig Melvin asked Trump if he would denounce anti-Semitism "just to clear up the confusion." Trump responded, "Well, I do all the time," adding "you don't know where it's coming from but I certainly hope they catch the people."

"We want to have it get very much better," the president told NBC.

Steven Goldstein, the executive director of the Anne Frank Center for Mutual Respect, released a statement calling Trump's statement "too little, too late" and a "Band-Aid on the cancer of anti-Semitism that has infected his own administration."

Although Trump insisted while speaking with Melvin that he denounces anti-Semitism "whenever I can," this marks Trump's first statement as president denouncing anti-Semitism. Trump had the opportunity to address the rise in anti-Semitism during a news conference with Israeli Prime Minister Benjamin Netanyahu last week, but instead chose to boast about his Electoral College win.

Trump's comments come on the heels of critics and former Secretary of State Hillary Clinton chiding Trump's silence regarding the recent uptick in anti-Semitic hate crimes and threats. Clinton said earlier today that anti-Semitic attacks "need to be stopped" and "everyone must speak out, starting with [the president]."