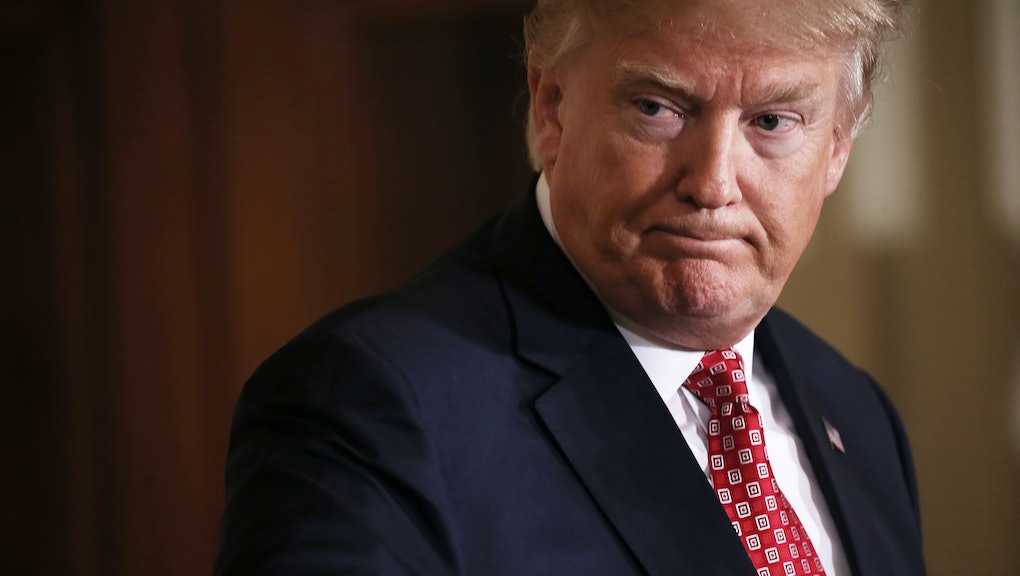 On the same day that the Department of Education misspelled W.E.B. Du Bois' name — then misspelled its apology — and the GOP shared a fake quote from Abraham Lincoln, President Donald Trump's official inauguration portrait was pulled from the Library of Congress's online shop after social media users noticed the poster had a massive typo.

The 8-inch by 10-inch print, which apparently sold out online, features Trump smiling behind a quote from his inauguration speech, with his signature in gold. But the most glaring part of the poster is that it misspelled "too" as "to":

No dream is too big, no challenge is to great. Nothing we want for the future is beyond our reach.

The oversight was quickly noticed by social media users, some of whom also noticed the poster's apt description: "This print captures the essence of Donald Trump's campaign for the presidency."

For anyone curious, "too" is an adverb that's used to describe something that is either excessive ("That's too much tuna.") or in addition to something else ("I want some tuna, too."). "To" is most often used as a preposition ("I'm going to the store.") or as an infinitive marker ("I'm going to walk the dog.").

In a literal reading of Trump's poster, the quote is essentially stating that none of our challenges include the process of becoming great, which is the depressing sort of notion one would only espouse if they were determined to, say, maintain historic disapproval ratings.

The Hill reported that the Library of Congress page selling the poster on their online shop was removed Sunday between 9:30 p.m. and 10 p.m. It's unclear whether it was removed due to the typo or because the print sold out. Either option is to — well, too bad.