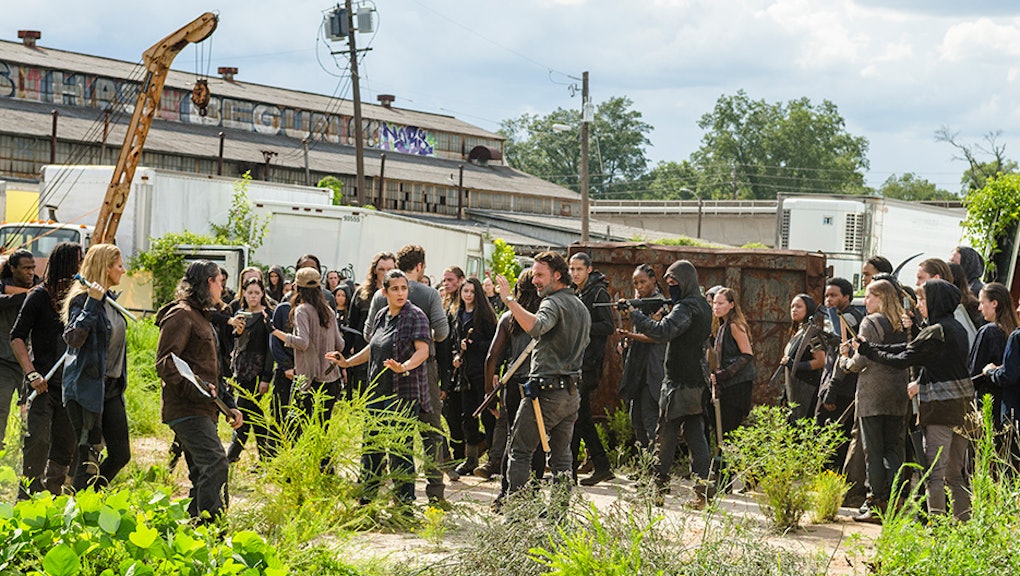 You may have missed this subtle clue about Father Gabriel in ‘The Walking Dead’ season 7, episode 9

It appeared that the old, untrustworthy Father Gabriel was back in The Walking Dead on Sunday, when he left Alexandria in the middle of the night with the remainder of their scarce supplies. Granted, Rick thinks Gabriel left a clue in his notebook of his whereabouts, but when he makes it to the boathouse where he previously foraged for supplies, Gabriel isn't anywhere to be found (at least, not on-screen) when a new group surrounds them.

Does Gabriel have something to do with this new group showing up? That's one theory to come out of the episode. But there's some important context to Gabriel's sudden disappearance that might've gone unnoticed: Gabriel wasn't alone in his getaway car.

"There will be more information as you view it more than one time, because, if you notice, there is a moment when he gets in the car, and the car’s driving away, and somebody sits up in the seat next to him," Walking Dead executive producer Greg Nicotero told Entertainment Weekly. "Not alone. So what we like is playing with the idea that it was always intended to be sort of uncertain."

Sure enough, if you look closely at Gabriel driving away into the night, you'll see a head pop out from the passenger's seat.

So, who was the person in the car with Gabriel? It probably isn't a member of Alexandria, considering nobody else at the community is missing.

Our best bet is to assume this person in the car is the same one with the binoculars who was spying on Gabriel outside the walls of Alexandria in the midseason finale. This mystery person could also be the same character with the fancy boots that was watching Rick and Aaron when they went to the boathouse to grab supplies.

All of this, meanwhile, could relate to the new group that surrounded Rick and co. and the end of the midseason finale. Gabriel might've tried to curry favor with them by offering some supplies in an effort to rally more communities in their upcoming fight against Negan and the Saviors. However, the big question heading into the next episode is whether this new group will prove to be another ally to Alexandria — or a new threat.

The 10th episode of The Walking Dead's seventh season, "New Best Friends," premieres Sunday at 9 p.m. Eastern on AMC. Watch a sneak peek of the upcoming episode below: