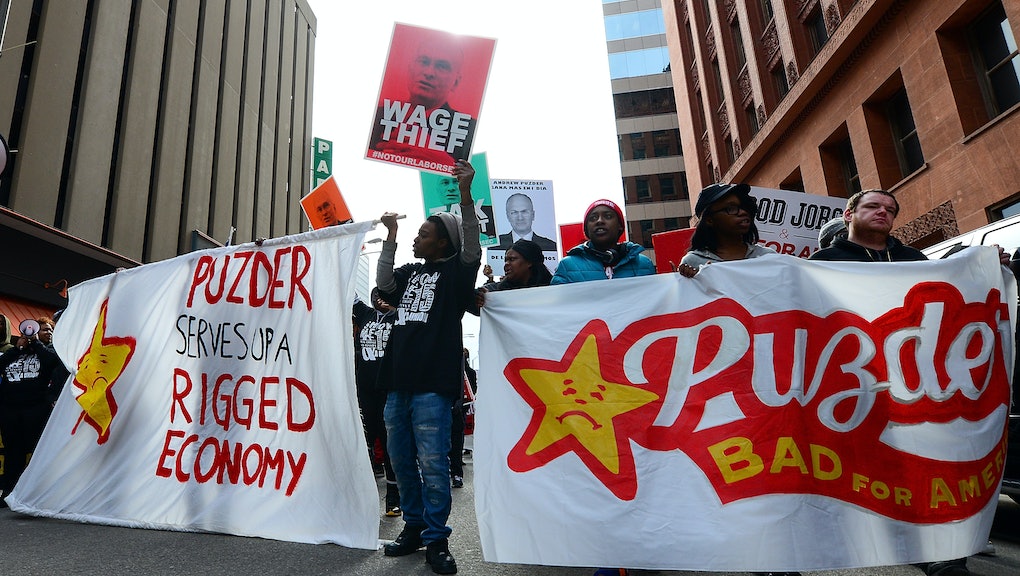 In 24 cities on Monday, fast food workers took to the streets, hung banners from the tops of buildings and even shut down a corporate office in St. Louis. They had one simple goal: to stop President Donald Trump from making a fast food CEO the top government official for protecting workers' rights.

Across the country, fast food workers with Fight For $15, a group dedicated to raising the minimum wage, marched on restaurants and offices to protest Trump's nominee, Andrew Puzder. Puzder serves as the CEO of CKE Restaurants, the umbrella company that owns Hardee's and Carl's Jr. burger chains.

Less than a month ago, cooks and cashiers filed 33 legal complaints against CKE. One complaint says that the company surveilled employees and sent out intimidating memos warning them not to speak to the press. One woman fought off advances from a manager who, after he was rejected, allegedly told her, "If you don't start giving me what I want, I'm going to have to start taking it from you."

These are the exact kind of infractions that Puzder, as labor secretary, would be in charge of defending workers against.

"Puzder's workers have experienced wage theft, sexual harassment and intimidation," Kendall Fells, the organizing director of Fight for $15, said in an interview. "And now they're going to put him in charge of enforcing these laws nationally? That seems ridiculous."

Although Jeff Sessions and Betsy DeVos were protested heavily before they were each voted in and have terrible optics as they enter their tenures, Puzder might end up with more trouble getting through the voting process.

At least four Republican senators have reportedly pulled support from Puzder's nomination — as CNN reports, Republican leaders will have to pull at least two back into the fold or risk a humiliating defeat in a Senate vote.

In the meantime, Puzder's hearing has been delayed four times, more scheduling changes than any other cabinet nominee.

"In 2012, when the first fast food workers went on strike in New York, there were two hundred of them asking for $15 and a union, and people laughed at them and said there was no way," Fells said. "Here we are four years later, it's more mainstream than ever.  So it's not about optimism. It's about the fortitude of these workers to do whatever it takes to win."