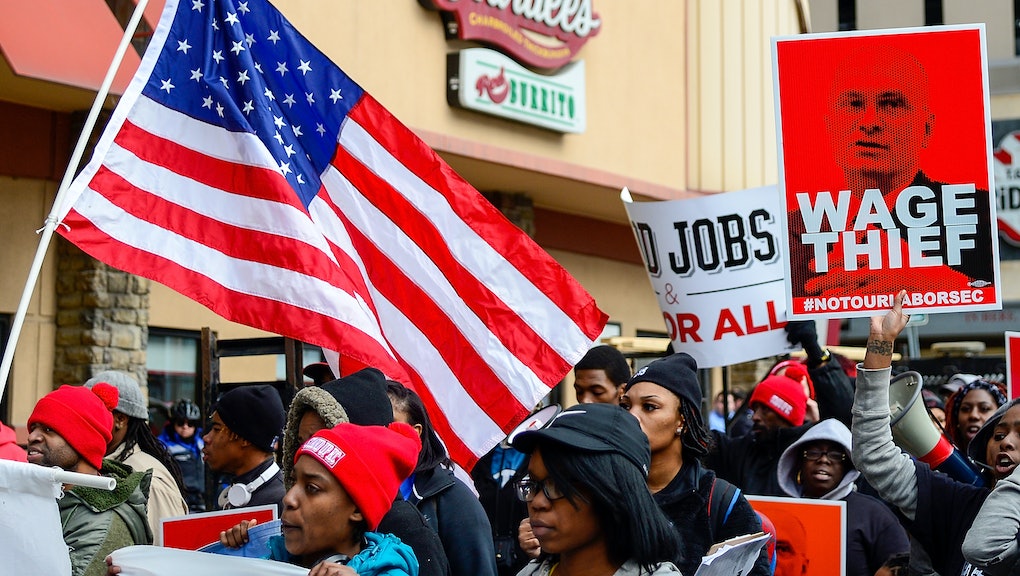 It's been a bad week for President Donald Trump's labor secretary pick Andrew Puzder, and it's only getting started.

On Monday, the Washington Post reported that four Republican U.S. senators — Susan Collins (R-Maine), Lisa Murkowski (R-Alaska), Tim Scott (R-S.C.) and Johnny Isakson (R-Ga.) — are now undecided about voting the CKE Restaurants CEO through the Senate Committee on Health, Education, Labor and Pensions, which would allow him to advance to the full Senate for a confirmation vote.

"I've had two conversations with Mr. Puzder," Collins said in a statement, according to Fortune. "I think there are outstanding questions that I'm sure will be delved into at his hearing."

But it may be more serious than just "outstanding questions." Collins also said that she has watched a damning episode of The Oprah Winfrey Show concerning Puzder, which could torpedo the nominee's chances at getting confirmed.

In 1990, Puzder's former wife, Lisa Fierstein, appeared on Oprah in disguise and accused her ex-husband of physically abusing her. She has since retracted the allegation, most notably in a letter to the Senate HELP committee. But the episode — which is difficult to find online — has been provided to senators by the OWN network, according to Politico. CNN reported that Collins is among those who have viewed it.

Puzder also faces mounting opposition away from Capitol Hill. On Monday, hundreds of his employees and their supporters marched on CKE headquarters in St. Louis and the Anaheim, California, office, to protest their boss' nomination. They were joined by their fellow fast food workers — CKE owns the Carl's Jr. and Hardee's hamburger chains — who staged corresponding protests in 24 cities across the country.

"Puzder's workers have experienced wage theft, sexual harassment and intimidation," Kendall Fells, the organizing director for the labor advocacy group Fight for $15, told Mic's Jack Smith IV in an interview. "And now they're going to put him in charge of enforcing these laws nationally? That seems ridiculous."

Puzder once said that he prefers robot workers to human ones because robots would never file an "age, sex or race discrimination case." Which makes sense for him, considering that in January, Carl's Jr. and Hardee's employees filed 33 legal complaints against Puzder's company for widespread labor abuses and workplace neglect, including wage theft and sexual harassment.

Puzder has also come under fire for Carl's Jr.'s misogynistic TV commercials, many of which feature scantily-clad women writhing and sweating while eating burgers and sucking the dripping condiments off their fingertips.

Trump — a self-described fighter for the American worker — tapped Puzder to be his labor secretary in December. But in light of the growing opposition from Puzder's own employees — plus wary GOP senators and revived domestic violence accusations against him — the CEO seems on rockier ground than even his most reviled Cabinet predecessors.

Puzder's committee hearing on Thursday will give more details about which way his fortune will swing. But if this week so far is any indication, things aren't looking great.