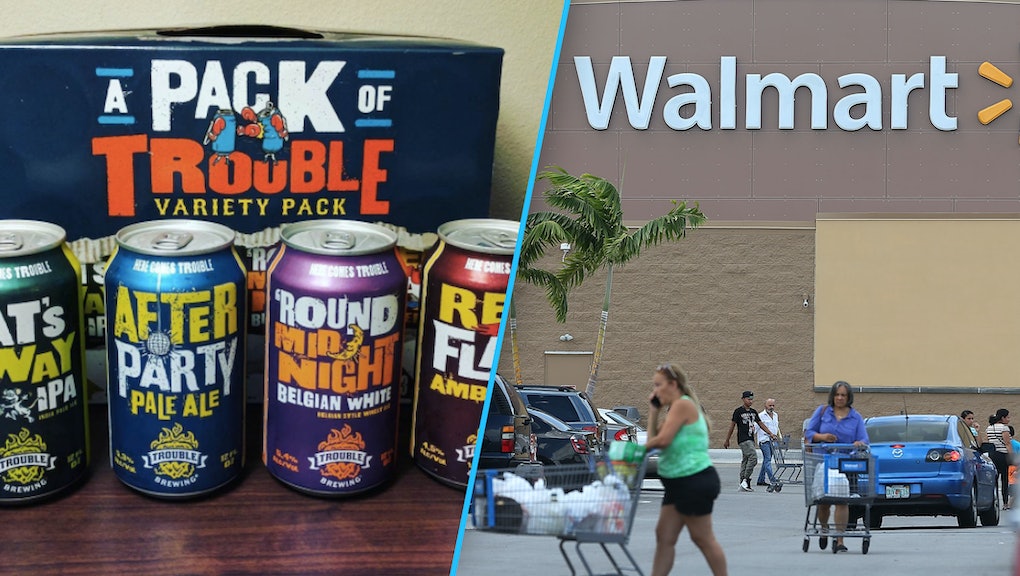 Looks may be deceiving when it comes to the beer aisle at Walmart. A lawsuit filed on Friday alleges that the retail giant has been misleading customers by selling mass-produced beer marketed as craft beer, Courthouse News reported.

Filed in Ohio, the lawsuit states that Walmart's "craft beer" is "a wholesale fiction" that's "designed to deceive consumers" into buying it at a "higher, inflated price." The complaint said the company has violated the Ohio Consumer Sales Practices Act. According to the Brewers Association — a not-for-profit trade association — a craft brewer is defined as "small, independent and traditional."

The Walmart beers in question: four brews created by Trouble Brewing for Walmart that have hipster-friendly names like Cat's Away IPA, After Party Pale Ale, Round Midnight Belgian White and Red Flag Amber. Walmart began selling the beers in 2016, the Washington Post reported. A variety pack sells for $13.86, and a six-pack is $7.96 — much more affordable than a six-pack of craft beer, which could set you back $12.

Here's what Cat's Away IPA looks like, compared to a beer from Stone Brewing, one of the largest craft brewers in the U.S.

Craft beer is currently big business in the U.S., so it's no wonder retailers like Walmart would want to siphon off some sales. In 2015, the craft beer industry grew 12.5% while the overall beer industry fell 0.2%, according to the Brewers Association. The craft beer market in 2015 was estimated to be worth $22.3 billion.

What is craft beer anyway?

To maintain the small, independent and traditional craft brewer status specified by the Brewers Association, a brewer needs to limit annual production to 6 million barrels, not be owned by an "alcohol industry member" and it should use "innovative brewing ingredients."

According to Teresa Budd, a senior buyer for Wal-Mart Stores' adult beverage team, the company wanted to mimic the style of popular craft brewers.

“We were intentional about designing a package that conveyed a look and feel you’d expect of craft beer,” Budd told the Washington Post, explaining that the company does not put its name on other private label products like cat food.

But other private label brews like the "Josephbrau" line from Trader Joe's make explicit reference that the brew comes from the retailer, the Washington Post pointed out; "Joe" is even in the beer name.

"Personally as a beer lover, I feel transparency in brand ownership and giving the beer lover the ability to know who brewed their beer is beneficial and valued," Julia Herz, craft beer program director at the Brewers Association, said in an email.

"It’s clear beer lovers want to support independent craft brewers," Herz said, noting that a recent Nielsen study found 63% of craft beer lovers said knowing a beer was made by a small and independent brewer was important to them.

The complaint against Wal-Mart Stores alleges that the company stocks the Trouble Brewing beers next to other craft beers, which perpetuates "the myth that it's a craft beer."

Stocking an allegedly fake craft beer next to other craft beers seems different from stocking store-brand cat food next to Fancy Feast. Consumers probably aren't trying several new types of cat food each month, but they might try new and different types of craft beer each time they head to a retailer like Walmart. Craft beer drinkers buy an average of 3.6 different brands of beer in a given month. Since craft brews are independent by nature and likely much less recognizable than big name brands for other products like cat food, a consumer might not be able to distinguish between true craft beer and a private label.

What is Trouble Brewing, and what's its relationship with Walmart?

Here's where things get murky: The complaint alleges that there's no "Trouble Brewing" brewery. When filing with the government, Wal-Mart listed "Winery Exchange Inc." — which is now known as WX.

The address on Wal-Mart's paperwork is the Genesee Brewing's office address in Rochester, New York, the Washington Post reported. Genesee Brewing is owned by North American Breweries, which owns and operates several breweries across the U.S. They're behind several beer brands — including Magic Hat, Portland Brewing and, naturally, Genesee.

The moral of the story is Walmart could be pulling a fast one over hipsters, duping them into buying six-packs with cheeky names and a distressed label.

WX did not immediately respond to Mic's requests for comment.  North American Breweries declined to provide a comment on the record.