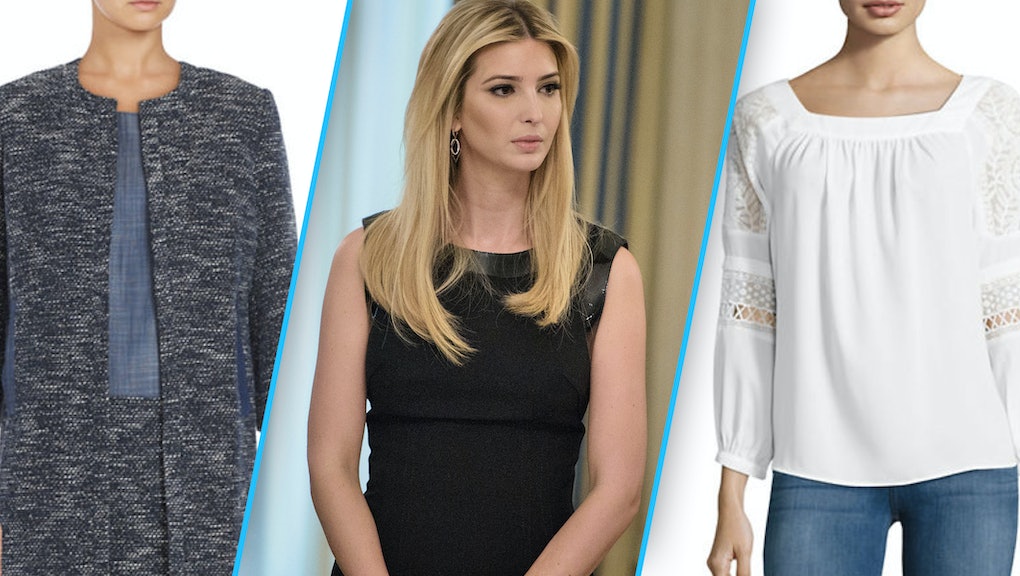 Hell, even Burlington Coat Factory, with its reputation for always looking like a entire class of toddlers has just run rampant around its stores, has dropped it.

For most of these stores, poor sales have been their stated reason for dropping the Trump collection.

But of course, some people can't help but see this all as politically motivated. The #GrabYourWallet movement has called on people to boycott Ivanka Trump's line and shopping anywhere that supports the Trump family at all. That could certainly have an impact.

And yes, these stores may in fact be trying to distance themselves from the Trump administration, with its nearly daily outrages involving immigrants and anti-Semitism and neo-Nazi behavior.

Like this $95 tweed box, for example, which is unsurprisingly on sale:

Or these $124 cork wrap-up flats, which are also unsurprisingly on sale on Amazon, marked down from $140:

Or this uninspired $89 peasant top:

Or this $51 T-shirt with an inconsequential ruffle:

Or this metallic, um, thing that is most definitely on sale as well:

Or how about this $169 horizontal stripe dress with ruffles at top of the arms, an area on a woman that comes with only the most insecurities?

It's not like we're the first ones who have pointed this out. On Twitter, it's a regular topic of conversation.

As far as her own customers, they're not too stoked either. As a review for that boxy tweed jacket from Lord & Taylor notes, "Maybe you could wear this to sleep on a plane, but otherwise, not what I expected. It looks like a burlap sack on, not a professional work outfit."

So maybe it's not just liberals who are responsible for Trump not getting picked up by major retailers again due to poor sales. Maybe it's a little bit of Trump's fault too, because she's the one who OK'd designs like these $120 perforated suede flats:

And this $89 suede wrap midi skirt:

And these two blouses that are in prints that scream, "I have lost the will to live. Hear me roar."

Although campaigns like #GrabYourWallet certainly encouraged people to not shop her line, that cannot be entirely responsible for the poor sales. Even the hashtag movement's founder, Shannon Coulter, thinks it has more to do with Trump than her own campaign.

"I think the primary reason for these poor sales is her actions," Coulter said in an interview. "To support a guy who mocks disabled people and jokes about assaulting women, it's not like that's not going to reflect onto your brand. She’s being held accountable for that. I think it would be wildly naive for people to believe that she could passionately campaign for Trump and for it not to come back on her brand."

Indeed, maybe this is the universe offering a bit of professional payback for offering American women uninspired, overpriced basics. Maybe this is what justice feels like.