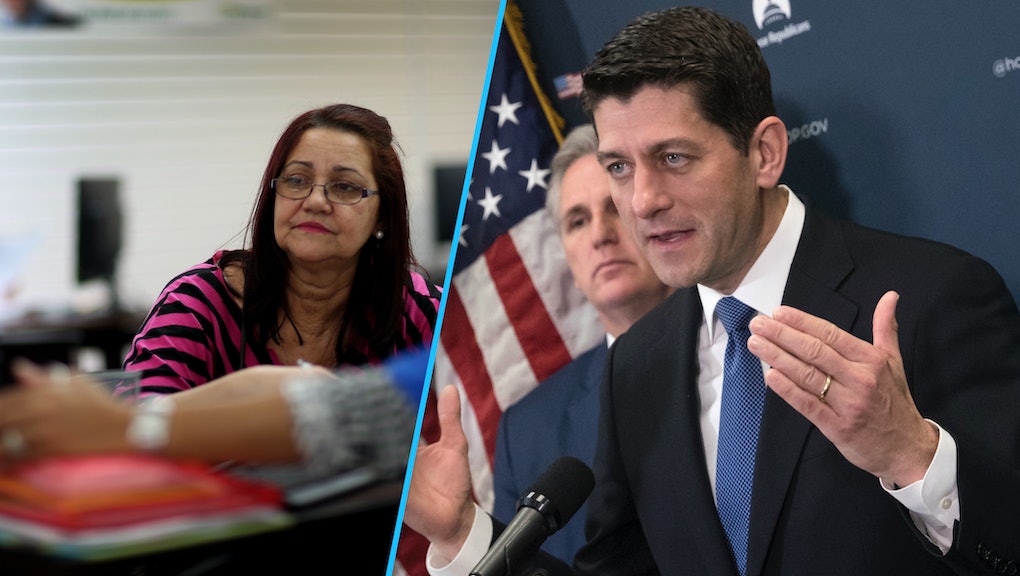 If Obamacare is repealed, 2 in 3 women who could lose coverage are women of color

Most women who have health insurance in America are white.

But the majority of those who would lose their health insurance if the Affordable Care Act is repealed could likely be women of color, according to an analysis from the National Women's Law Center released Tuesday.

The study examined health care coverage between 2013 and 2015 on a state-by-state basis. The overall number of uninsured people in America was 41.3 million in 2013 — but with the assistance of the ACA, that number dropped down to 28.5 million by 2015.

Indeed, millions of people — not just women of color — are vulnerable to losing health care if Congress quashes the ACA once and for all.

But the numbers for women are especially stark. Between 2013 and 2015, 7.8 million U.S. women aged 18-64 years old gained insurance coverage, according to the NWLC. Now, many of those women are at risk of losing their coverage.

And a majority — 5.1 million — are women of color, the NWLC analysis finds.

A big reason so many women were able to get health insurance in the first place is because the ACA expanded Medicaid, a government entitlement program which provides health care to the country's most vulnerable populations.

"I think one of the most interesting findings was how much Medicaid expansion there was and how much that increased insurance access across the board," Gretchen Borchelt, the vice president for reproductive rights and health at the National Women’s Law Center, said.

"The states that expanded Medicaid had more insurance gains of every kind, which points to each piece of the law being very important," Borchelt added. "You can't take these piecemeal approaches, like members of Congress are proposing. If you take away one part, you're undermining the whole system."

Forward-looking estimates of how many people would lose insurance if the ACA is repealed vary enormously, from 15 million to 32 million.

But given the high numbers of vulnerable populations who rely on Medicaid — like women of color and fostered children — shrinking its coverage could hurt minorities most.

"Women of color, who already face too many barriers to health care, have the most to lose."

Proponents of replacing or amending the ACA argue that — while some people will lose insurance — eliminating the law will lower overall costs and premiums for everyone.

"I'm highly confident in [Health and Human Services Secretary Tom Price (R-Ga.)], that he will lead the various groups in Congress and the White House to a replacement bill that will lower costs," John R. Graham, a senior fellow at the conservative think tank National Center for Policy Analysis, said.

Graham, who opposes the ACA, says that instead of tax credits, Americans should be given money directly and — instead of the individual mandate requiring taxpayers to sign up for insurance — people should be able to choose what they want to do about health care.

On Jan. 24, Graham testified for the House Ways and Means Subcommittee on Oversight, arguing the individual mandate is "economically inefficient."

But Graham acknowledges that the matter of what will replace the ACA is a deeply complicated issue.

"For people who ask, 'What do you do when a woman with breast cancer has to suddenly go shopping around for the best treatment?' that's a tough question," he reflected. "And the way I would answer it is I would say, 'All patients should be empowered to make decisions regarding their health care.'"

They point out that removing regulation in the industry and allowing "the market" to dictate the terms of health care would actively harm Americans.

Instead of empowering people, as Graham contends, they argue it would empower insurance companies: The ACA introduced rules for insurers in order to protect patients, by preventing companies from denying coverage for a pre-existing condition or enforcing an annual benefits cap.

That is to say nothing of limiting access to reproductive health care by eliminating the contraceptive coverage mandate — and covered preventative exams.

"The ACA has literally been a life-saver for women, giving them the health insurance they need," Borchelt said in a press release for the NWLC's new study. "Women of color, who already face too many barriers to health care, have the most to lose."

She added: "We can’t go back to the days before the ACA, when insurance plans could charge women more just for being women, many low-income women couldn’t get Medicaid coverage no matter how poor they were, and when working women went without coverage because their employer didn’t offer it, and the individual market failed them."

If this news worries you, you are not powerless.

Then there are other exceptions, like qualifying life events (e.g. getting hitched or losing your job), or you could sign up for short-term insurance to buy time.

Borchelt also told Mic she hopes concerned citizens will reach out to legislators to voice concerns about changes to the Medicaid program or about defunding of Planned Parenthood if these issues are likely to impact them.