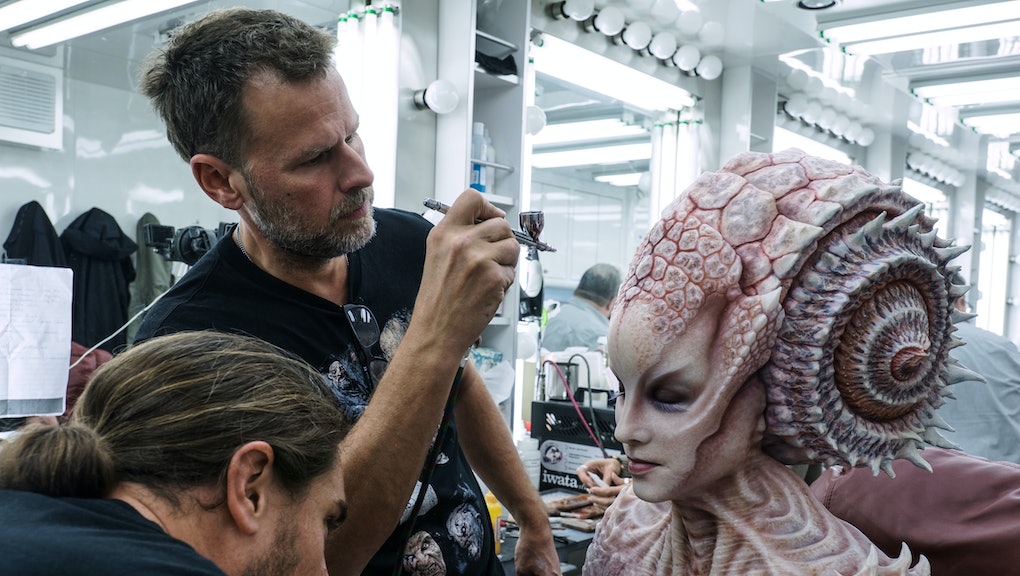 We are now less than two weeks away from the ultimate celebration of cinematic achievement: The Academy Awards. On Feb. 26, the past year's best in cinema will gather at the Dolby Theatre in Hollywood to see who will be bringing home Oscar gold. Among the many artists who will be waiting to hear their name called at the 89th Academy Awards is special effects makeup designer Joel Harlow, who, along with Richard Alonzo, is nominated for best achievement in makeup and hairstyling for a little film called Star Trek Beyond (it was a huge film).

Star Trek Beyond, which was the third film in the reboot series that began with J.J. Abrams' Star Trek in 2009, was not just another Star Trek film — it was so much more. The film paid tribute and was dedicated to two tremendously gifted actors — Leonard Nimoy and Anton Yelchin — who sadly passed away prior to the film's release. The film's closing credits included dedications to both of the actors. The first read: "In Loving Memory of Leonard Nimoy." The second: "For Anton."

Star Trek Beyond also paid homage to what many consider to be the greatest science fiction franchise of all time. The film was released 50 years after Gene Roddenberry's original series, making Beyond a celebration of a franchise that redefined science fiction. Mic recently spoke with Joel Harlow, who won an Oscar in 2010 for Star Trek, about his role on the film, the 50+ unique alien races he helped create and more.

This interview has been edited for clarity.

Mic: Star Trek Beyond was released during the 50th anniversary of the series, and paid tribute to this illustrious franchise. What was it like be part of that process?

Joel Harlow: It was enormously gratifying and very special to, first of all, be part of a Star Trek film, but then to be part of the film that comes out on the 50th anniversary of such a beloved franchise. And how we approached it in the shop is that we wanted to give fans of the series something that they hadn't seen before in terms of makeup, character and special effects. [For] our characters, we tried to push the envelope with them, and really deliver something unlike what we had seen before. What I mean by that is typically a Star Trek alien is [only] head and hands.

We had the opportunity with a lot of our characters to go beyond that and carry alien anatomy into the body, while still keeping the Star Trek aesthetic — because there is a very clear aesthetic of the Star Trek alien as opposed to other science fiction franchise films. They are primarily humanoid, they are almost always makeup driven, as opposed to computer generated, and that is our craft: makeup. To carry that into the rest of the body is something that we all embraced in the shop.

Moviegoers don't aways realize what goes on behind the scenes of a film to make characters ready to be shot. Especially with Star Trek, the expectation may be that because it is a science fiction film it will be heavy on CGI. But these alien characters are definitely makeup and costume based and look realistic because of that.

JH: Exactly. That is Star Trek. That is what an alien in Star Trek is — it is a real world, tangible, prosthetic, makeup driven character. It is not a fantasy driven, CGI character with multiple arms, it is a real world character. Something that when it plays off of other people, other actors, environments, whatever it is, you can tell it is in that environment. As good as the CGI character work is today, I still think as an audience, you can spot the characters that are not really in that environment.

Because that is my particular craft, I appreciate the work that goes into the sculpture, the design, the molding, the fabrication, the casting, trying to figure out how to make it work in the real world. That is the challenge, and along the way trying to push it as far as you possibly can.

From conception to design, what is the process like to create even just one unique alien race?

JH: It starts with the design. On this film what I wanted to do was get as many designs in front of [director] Justin Lin as possible. Just so I could get a sense of the aesthetic he was going for in this particular Star Trek film. We started designing in October and it was a meeting a week, and in each of these meetings I would have stacks of designs and from those, he would take his favorites and start earmarking them for various scenes as the script was being fleshed out.

I think that is why we wound up with so many characters that we created. Because we were plugging [the various races] into this scene, and then when it came time for the specialty characters we had to build those, so the numbers grew really quickly. I had an amazing team and they were all fans of Star Trek so any challenge that was presented to them, was something that they, and I, eagerly gobbled up and kept surging forward.

Was there a particular character or alien you most enjoyed creating or working on the most?

JH: There is something about all of them actually. I have never been on a film where I was completely happy with every single character that we created, other than this film. Every one of those 56 races we ultimately wound up with I am completely happy with and I would be proud to have it be featured as its own leading character in a science fiction film.

As far as a favorite goes, aside from organizing and supervising, I was also in the lab sculpting, so the ones I particularly were drawn to sculpturally that I did — Danny Pudi plays a character that Scotty meets when he first meets Jaylah. He is this lizard type of character they square off against. That was one I liked a lot. Of course I liked Jaylah, she is in outstanding makeup. I like Krall. I love the transition back to human with Krall. Anytime you can do a transformational makeup like that, it is just another level.

There is something about each of these characters. The Syl character, the back of her head opens up, I love that one, because it was our homage to H.R. Giger, the facehugger.

How long does it take to get an actor ready for one of these roles?

JH: Yeah, it's a long time. Aside from what it takes to get to the point where you're going to get your actor into a makeup chair, you’re talking months of design and sculpting and molding. Then you finally get to the point where the actor comes into the trailer and that can take anywhere from three hours to five hours. The Natalia character took seven hours to put her into makeup.

It's a lot. And multiply that by having 25 of these characters working on any given day. We did not have a day on this shoot where were we didn't have at least one or two specialty makeup characters working. And more often than not it was 10 or more. The time in the chair for each actor is different, because all the characters are all radically different. Even in the building of them, there is no set path from A to B to C.

JH: This is one thing that has never changed, and I hope never will change. I feel enormously grateful for being able to do what I love for a living. Because even if I wasn't making a living at it I would still be doing it. And I think that is what led here. As a child in North Dakota growing up in this frozen tundra, I would pass the time in my bedroom sculpting and watching old movies. Ultimately, it was seeing King Kong, the original King Kong, that put the seed in my head that I wanted to do something like that — create some kind of character that would leave people with the same feeling that seeing King Kong left me with, that I was watching magic happen.

You have worked on some pretty iconic characters like Captain Jack Sparrow, those from Star Trek and now you have exciting films coming up like another Pirates of the Caribbean movie, Logan and Black Panther. What is it like seeing these characters whose history dates back decades, especially in comic books, come to life on the screen?

Having been a fan of comic books and graphic novels, seeing Old Man Logan take shape and Hugh [Jackman] bring that to the screen and [director James Mangold] bring everything they were doing to that character and being a part of that is really special. Every time something like that happens, I feel like a kid. I feel like a kid most of the time anyway just because I think you kind of have to to do this kind of work. You have to be part-kid, part-businessman, in this business.

Every time I am creating I feel like a kid. It happened 56 times in Star Trek Beyond. Every time those creations came to life, it was like this eureka moment: "Oh my god, that's a thing we made, and there it is moving and breathing and talking and acting." It is pretty amazing.

How does it feel being nominated for an Academy Award for Star Trek Beyond?

JH: No matter what happens on Oscar Sunday, I am tremendously honored to be considered by the Academy, especially for this film. This Star Trek film is so important to me. At the beginning when we started our prep, we lost Leonard, and we all gathered around the shop and had a moment of silence and pledged to make this one the best one yet in his honor. And then we lost Anton after the film was out.

There is so much in this film, so much heart, so much soul in this film, for the Academy to recognize us, at this point we all feel tremendously touched by that. Because we did pour more of ourselves into this film than I think any of us ever had in any film.