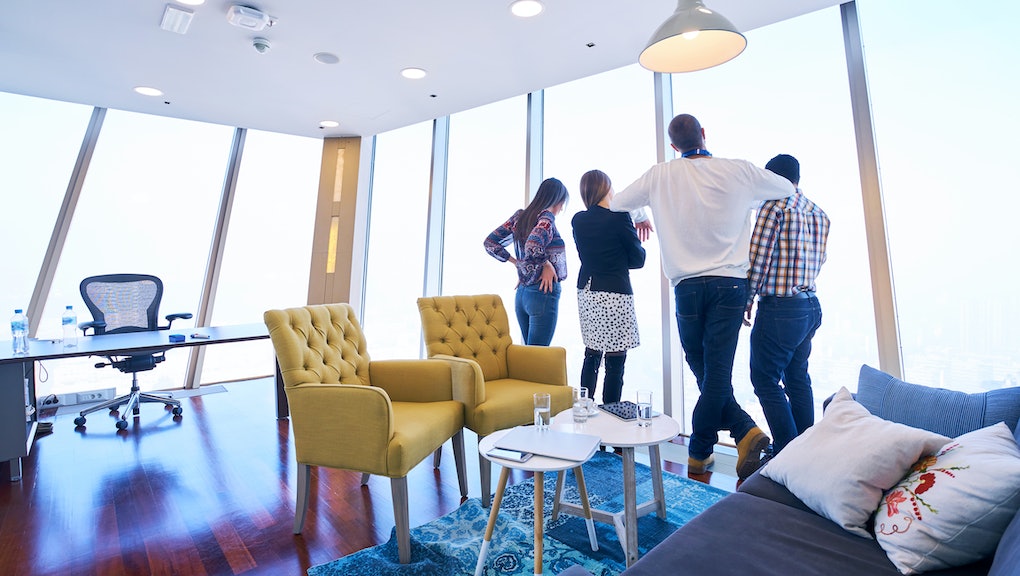 Attention, budding entrepreneurs! Here's how to get $10,000 to fund your dream startup

It pays to be thoughtful about the things you'll need in old age — sometimes literally. One experiment found people save twice as much money after looking at aged images of themselves.

But now thinking about aging can pay off for another reason: Aspiring entrepreneurs can win $10,000 for their next venture by dreaming up inventions aimed at their older selves.

A contest is being sponsored by AARP as part of an effort to make senior tech the next hot trend in Silicon Valley. You can get details on how to apply on the organization's website.

It's not a game-changing amount of money for a startup, as TechCrunch notes, but the real reward is probably going to be other perks — like meetings with AARP executives and potential product exposure to its 38 million members.

That's a lot of downloads, and potential dollars.

AARP hopes the effort will draw attention to what it sees as an underserved market: The elderly like cool tech, its thinking goes, and entrepreneurs might be neglecting a lucrative opportunity due to ageism.

"Research shows that 70% of U.S. disposable income is controlled by an aging population," Anne Marie Kilgallon, vice president of enterprise strategy and innovation for the AARP, told TechCrunch.

Submissions are due to AARP on April 15. Ideas must fall into one of six categories, like "health and safety awareness" — which could include innovations that help people keep track of their diet or medications — and "caregiver quality of life," which might include anything aimed at helping home care workers who deal with long hours and unpredictable schedules.

Even though aging and retirement might feel a million years away to you, science says you should really start thinking about it now — research shows that the physical aging process starts a lot sooner than you'd think, as early as 25, when it comes to hearing loss.

Of course, if senior tech doesn't really sound like your bag, there are lots of other ways to get a big chunk of startup change — and get your latest project off the ground.

The most famous of the prize-granting startup competitions are probably those organized through TechCrunch Disrupt, thanks to the status it's earned anchoring the plot of the HBO comedy Silicon Valley.

Those Disrupt events happen throughout the year in multiple cities and culminate in the Startup Battlefield, a pitching competition, usually judged by prominent venture capitalists, that comes with a $50,000 prize.

While TechCrunch's award is prestigious, if you want to be strategic, consider swimming in a smaller pond where you can benefit from less competition.

Like AARP's latest offering, many startup competitions target individual niches, regions or industries — a trend that is increasingly becoming the norm, John Henry, a managing partner at Harlem Capital Partners, told Mic in an email.

"It's really hard to provide a tailored, custom and overall more relevant experience for the companies when there are 10-20 companies across seven to 10 different fields," Henry said. "What I've been seeing in the last two years is a hell of a lot of accelerators realizing this, and thus, heading into industry- or location-specific verticals."

The New York Public Library and the Citi Foundation are currently accepting submissions for their startup competition, which offers a $15,000 prize for companies launched in three of New York City's five boroughs; any industry will be considered.

There is also FAEA, a competition for young French-American entrepreneurs that comes with a $10,000 prize. Those winners benefit from mentoring and media exposure and are judged on criteria such as clarity, innovation and early market success.

There are also frequent competitions targeted at college students. They're often sponsored by specific universities, but some accept submissions from across the country. Right now, Future Founders is sponsoring a pitch-off, where the winner will take home $5,000.

But if you want the serious money, you'll want to think bigger than prizes — you'll need to start thinking about how to get an investment.

Some competitions, like G-Startup WorldWide, offer up to $1 million in investment to companies that win its global pitching competition. To get your foot in the door, you'll have to win one of its regional contests held in cities across the world, from San Francisco to Jakarta, Indonesia.

You won't be able to drop the winnings on your dream car, but you might actually have enough money to get your company off the ground.

The question is, how can you get the attention and respect of the industry types doing the judging at these competitions?

If you can find a mutual connection, there's no beating a warm introduction, Henry said. Many prominent VCs, like Jason Calacanis, are pretty accessible on social media.

Failing that, Henry suggests diversifying your team, since far too many founders think of themselves as one-person shows.

"Overall, a startup is too much work for one person," Henry said. "Since most startups are likely to fail anyway, we try to limit our risk by investing in teams that have all the core strengths they would need to pull this off."

In other words, the thing holding your startup back might not be that elusive breakthrough or your pitiful subscriber base, which Henry said are pretty common anyway: To really move forward, Henry recommends finding an employee who's good at what you're bad at, since your team is often just as important as your big idea.

Once you've scored seed money, be wary that roughly half of startups fail within four years, depending on the industry. You'll want to take steps to make sure you're in it for the long haul.

To start, steel yourself for long hours, since virtually all entrepreneurs say that starting your first business is no cake walk. Giving yourself a "soft launch" to work out kinks can make the rush a bit more bearable.

In retrospect, many experienced entrepreneurs also say they were too quick to treat insurance and liabilities as afterthoughts when they should really be top of mind from day one.