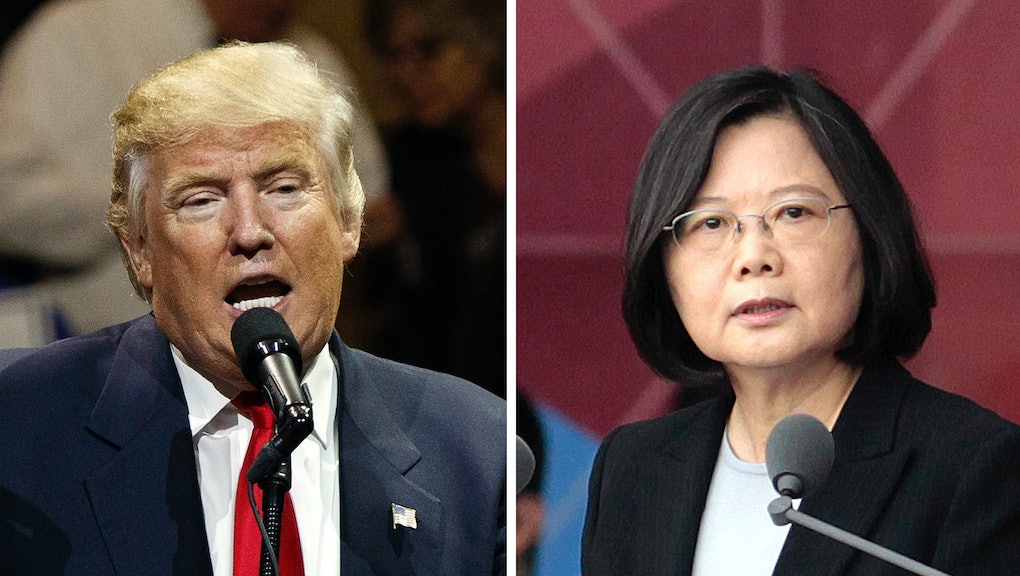 Why did Donald Trump cave on the "one China" policy?

On Feb. 9, President Donald Trump spoke to Chinese president Xi Jinping and assured him that the United States would honor the "one China" policy. That the U.S. would honor an almost 40-year-old policy should not have been news. However, the phone call followed a statement Trump made on Dec. 11 to Fox News, saying, "I don't know why we have to be bound by a 'one China' policy." This caused an uproar in China, and a Chinese newspaper called him "ignorant as a child." Why did tough negotiator Trump cave on the "one China" policy?

What is "one China"?

In 1949, Taiwan split from mainland China, and the United States recognized Taipei as the capital of a single nation-state, the Republic of China. In 1979, the United States switched its recognition from Taipei to Beijing, the capital of the People's Republic of China. It still recognized a single China, but under the rule of the communist government and not the nationalists in Taiwan.

Cordial relations remained with Taiwan, and even in its statement recognizing Beijing, the U.S. acknowledged that while Taiwan was part of China, the U.S. would maintain separate ties with Taiwan. Now, Taiwan has many attributes of statehood, and maintains that its existence is separate from the PRC. But it does not claim to be an independent state. It is perhaps best described as a "state-like entity." This is the basis of the "one China" policy that has existed with relative stability since 1979.

Trump has staked his reputation on his ability to make deals. He hopes to reach a grand bargain with China on trade issues and territorial disputes, and help in negotiating with North Korea. If he had continued to imply that the U.S. might abandon "one China" and recognize Taiwanese independence, there would be no chance of cooperation with China on any outstanding issue. Trump likely had hoped to use Taiwan as way to extract concessions from China, but it is possible that he did not realize that the Chinese red line on Taiwan is immutable.

There is another, possibly equally, important reason to change policies. Trump's earlier stance on "one China" likely went farther than Taiwan is willing to go. Taiwan has not submitted a formal request for recognition from the United States, it claims sovereignty only over its own island, and one state cannot force another to become independent. Moreover, if China were to respond militarily, either the U.S. would get involved and there would be an armed conflict between the U.S. and China, or the U.S. wouldn't get involved and would sow fear and doubt in its allies worldwide. There were no good outcomes to unilaterally abandoning "one China."

Of course, sometimes Occam's razor provides the easiest answer: Maybe Trump never heard of the "one China" policy until he was first asked about it.