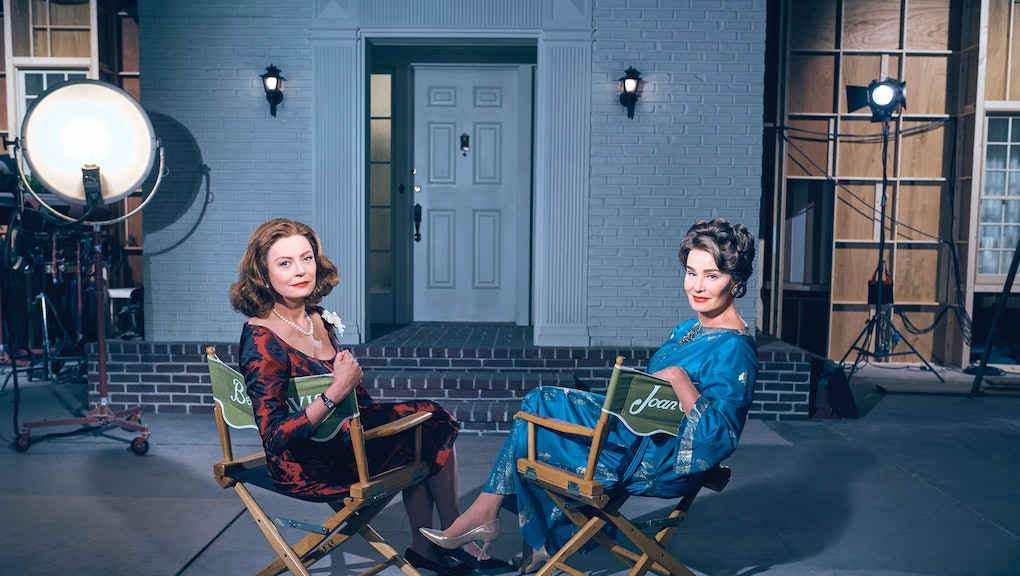 'Feud' Review: Jessica Lange and Susan Sarandon pull back the layers of a Hollywood rivalry

As soon as the first installment of Ryan Murphy's latest anthology series was announced, it was impossible for something like Feud: Bette and Joan to not attract lofty expectations.

Here we had one of the juiciest, cattiest rivalries in Hollywood history — Bette Davis vs. Joan Crawford — set against the backdrop of one of the campiest films ever made (What Ever Happened to Baby Jane?). Add to that a cast that literally sounds like the stuff of Murphy's artistic wet dreams and a spot-on re-creation of all forms of early-1960s chic (cigarette-flicking, cocktail-sipping, high-heel-clicking).

Sometimes, however, you can have too much of a good thing. Because maybe if we didn't have such high hopes for this eight-episode series, which premieres on FX Sunday, March 5 at 10 p.m. Eastern, we wouldn't be so hard on it. Feud: Bette and Joan is a solid, entertaining exploration of not so much the behind-the-scenes rumors that plagued the production of a beloved 1962 film, but of the difficulties aging movie stars like Davis and Crawford endured in that unforgiving town called Hollywood.

Here's the irony: Even for this writer, Murphy would be the first person I would think of to helm this kind of a project. Who better to take on these two gay icon grande dames than the guy who gave us Glee and American Horror Story? But since Feud: Bette and Joan is less about the actual feuding (although there is plenty of it) and more about the anguish behind it (as Catherine Zeta-Jones' Olivia de Havilland comments, in what is basically the series' thesis statement: "Feuds are never about hate. Feuds are about pain"), it falters because it's still the story of women told through a man's lens.

The most heartbreaking lesson we learn from watching Feud: Bette and Joan is how little things have changed in the movie and TV business since What Ever Happened to Baby Jane? was produced. Women are fighting the same fights for recognition and equality as the middle-aged Davis and Crawford were over 50 years ago.

Kudos to Murphy, of course, for putting this theme at the forefront. But at the same time, regardless of the stellar performances put in by Jessica Lange, Susan Sarandon and the rest of the cast, there's something a bit off about having this story told by and partially directed by a man. In fairness, while Murphy directed three of the eight episodes, four of them do have females in the director's chair — one of them being Academy Award winner Helen Hunt.

Feud: Bette and Joan can be a slog at times, perhaps because it doesn't need eight one-hour episodes to tell its story. Things don't get terribly interesting until after the pilot, and one gets the sense that a good portion of the series is just Murphy trying to stuff it with as many familiar faces as he can (Sarah Paulson! Kathy Bates!). The show's real strength is Lange's and Sarandon's performances, though the latter is less believable as Bette Davis in a physical sense only due to the fact that it's just plain easier to disappear into character when it calls for thick Crawford-esque eyebrows.

Lange and Sarandon are front and center as the old bastions of Hollywood glamour, but the ones who give Feud: Bette and Joan its real backbone are two of its supporting players. First is the incomparable Judy Davis as the proto-TMZ gossip columnist Hedda Hopper. Any lesser actress would have been upstaged by the character's flashy ensembles, but Davis achieves the near-impossible, giving a nuanced performance despite wearing Hopper's over-the-top feathered chapeaux and faux pearls. Needless to say, she wears the costumes in this role — they don't wear her.

Also putting in excellent work is Alison Wright as Baby Jane director Robert Aldrich's assistant, Pauline. Fans of FX's The Americans will be tickled to see that after flying off into an unknown Soviet future last season, the erstwhile Martha Hanson has landed in 1962 Los Angeles and is leading the charge for women writers and directors in an industry that even in 2017 is still known as a "boys club." The movie stars like Davis and Crawford may have been dealing with ageism, sexism and misogyny in the spotlight, but Wright's character is the all-important mouthpiece for the countless women who have been battling the same problems from behind the camera for decades.

For those wondering if a What Ever Happened to Baby Jane? screening is required viewing for Feud: Bette and Joan, the answer is no — though it doesn't hurt. If anything, a Mommie Dearest rewatch would make more sense here, especially because Murphy admitted to tossing in some Easter eggs from the 1981 cult classic starring Faye Dunaway as Joan Crawford; think ice, witch hazel and rare steak served to growing girls. And if you really want to see how much Kiernan Shipka has grown since her days as a lisping Sally Draper on Mad Men, check out season 2 (which is set in 1962) of the Emmy-winning drama before watching Feud. The woefully underused Shipka, who plays Davis' teenage daughter B.D. in the new series, is right at home on a Kennedy-era set, but is now way more like Betty Draper than Sally in her look and demeanor.

Feud: Bette and Joan may not be perfect, but perhaps that's the point. It's all about pulling back the layers of glitz, glamour and gossip to find the reality beneath. You may be tempted to join #TeamBette or #TeamJoan, but as the show progresses, you'll discover that while these frenemies were both guilty of stooping to contemptuous levels of backstabbing, they were also victims of a chauvinistic regime that only cared about squeezing every last penny it could out of two old broads — and tossing them aside when it was done with them.

Feud: Bette and Joan premieres Sunday, March 5 at 10 p.m. Eastern on FX. Watch the trailer below: