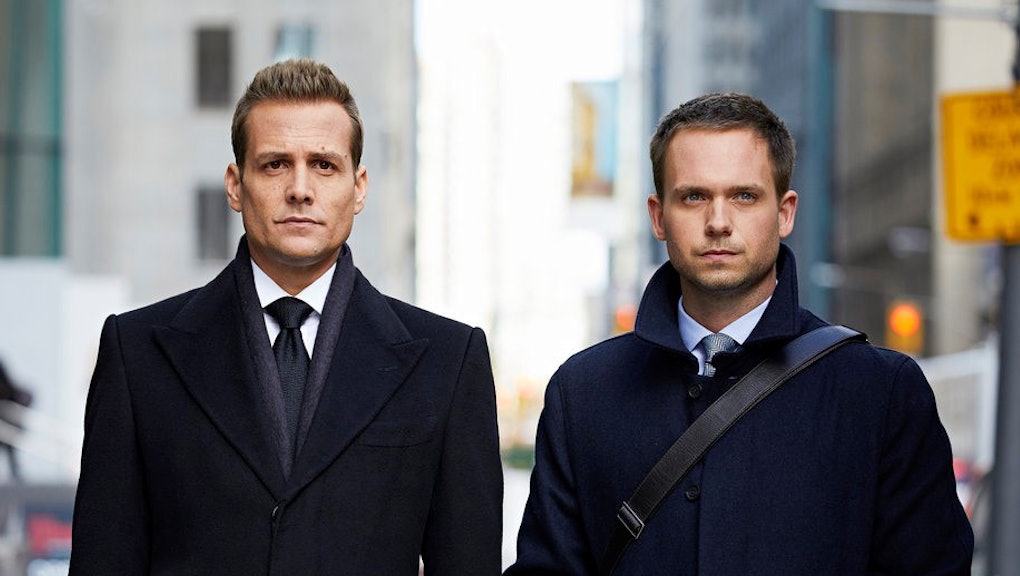 'Suits' Season 6, Episode 14 Recap: Mike takes his shot to become a lawyer in "Admission of Guilt"

Towards the latter moments of last week's Suits, Mike tells Harvey that he is ready to do what it takes to officially become a lawyer. In season six, episode 14, titled "Admission of Guilt," Mike and Harvey get started on a lawsuit with the intended goal of driving down the stock price of a company. Even though Oliver finds a legitimate reason for suing the company, we all could have guessed this was not going to be a straightforward path to Mike's acceptance by the bar.

(Editor's Note: Spoilers ahead for season six, episode 14 of Suits.)

In episode 13 of this season, Craig Seidel, an attorney on the character and fitness committee of the New York bar, tries to shake Harvey Specter down in return for Rachel's eventual admittance as an attorney. Obviously, Harvey turned the tables on him, and not only does Rachel pass the character and fitness portion of the bar, but Seidel agrees to go to bat for Mike Ross. That is, if Harvey can drive down the stock price of a competitor.

Harvey and Mike back in action

While I would definitely prefer for Mike to remain unaffiliated with Pearson Specter Litt for as long as possible — to keep things fresh — it is certainly great to see Mike and Harvey back together in some form, witty banter and all. In "Admission of Guilt," Mike and Harvey begin their (let's call it what it is) collusion to get the former admitted to the bar.

They know that in order to file a suit that would actually affect the price of the target company, they will have to secure an admission of guilt. Because that is not something that Pearson Specter Litt would normally go after — and since Harvey does not want to strengthen his tie to the case — the suit is handed over to Mike and his clinic.

After some initial confusion over why Mike would even take this case, Oliver, who failed miserably in court last episode, is able to find some shady non-disclosure agreements that were signed, likely indicating that the company had done some real damage. Mike eventually brings Pearson Specter Litt back on board as co-counsel — much to Harvey's initial displeasure — after the CEO of the company threatens to send so much paperwork that the legal clinic would "choke."

With the juggernaut of Pearson Specter Litt behind the case, the CEO eventually offers to settle for $100 million. But when Mike refuses to accept any offer without an admission of guilt, and Harvey later turns down anything less than $500 million — the exact number that would impact the company's stock price — the CEO figures something is up, quickly zeroing in on Craig Seidel's involvement.

When one door closes...

It is not yet clear whether the case against the company is over (hopefully it is not) but what certainly isn't over is Harvey's attempts to get Mike admitted to the bar. Early in the episode, Rachel has Harvey promise that if the case becomes too risky, he would pull Mike out. Obviously, she cannot stand for him to go back to prison. Well, things got risky.

It certainly appears that Harvey is pulling the plug on the case, but after learning how shady Seidel is, he blackmails him with exposure if he does not make sure Mike becomes a lawyer. Somehow I feel like this will not end well. Harvey has really pushed the envelope this season, essentially committing crime after crime for Mike's benefit.

While Harvey's actions show an extreme commitment to friendship, I cannot shake the feeling that there may need to be consequences — even if we don't like them. Let's just say I won't be shocked if Harvey faces some legal troubles at some point.

Can Louis keep a client?

While the primary focus of "Admission of Guilt" was Mike and Harvey's case, that does not mean there wasn't plenty of action back at Pearson Specter Litt. In the early moments of the episode, Louis asks Harvey to take part in an annual client presentation that the former usually does with Jessica. While Harvey says he will do it, he later backs out when things get too busy with Mike.

Keeping with his continued development throughout season six, Louis accepts this, begrudgingly, and looks to find another way to please the client. By the way, I am loving Louis and Harvey's relationship this season. There is some real funny banter between the two, with more mutual respect, and much less of Harvey's belittlement. It is nice to see Suits continue to evolve and not stick with the same formula.

With a little input from Donna, Louis recruits Katrina and Rachel to help him dazzle the client with substance, rather than rank. And while the three of them felt their presentation (which we do not see) went well, in the end, the firm is fired for not showing up with Harvey, and because Louis later defended Katrina and Rachel. Again, rather than lose his temper, Louis takes the defeat in stride, going home to Tara to discuss his tough day.

I certainly hope this does not happen, but I could easily see Louis exploding from pent-up rage in later episodes, as he has really kept his cool at times when he would normally get Litt up.

"Admission of Guilt" continued Donna's story arc with Benjamin, with the two of them collaborating on a Siri-like device called "The Donna." And while Westworld was even name-dropped this time, it is pretty safe to assume this storyline is not leading to any type of robot uprising.

To this point, "The Donna" seems to be mostly functioning as a form of comic relief, but in that role it is succeeding. The episode featured some humorous moments between "The Donna" and Harvey, as well as some fun back and forth between the device and the real Donna. The question, though, leading into "Admission of Guilt" was whether "The Donna" could learn to show more empathy.

While it initially appears that Benjamin would not be able to achieve such human-like features with the device, towards the end of the episode, "The Donna" consoles Donna in a very similar way to how she comforted Benjamin. It's learning (cue scary music).

"Admission of Guilt" was another strong episode in Suits' sixth season that was rich in conflict and had a fair share of drama. Having Mike, and the rest of his clinic, work on the case, tremendously highlighted the various characters' internal conflicts. Mike is clearly uncomfortable with what he has to do, but on the other hand, he wants to be an attorney, and he really wants to help these miners who are suffering life-threatening illnesses.

It is also easy to understand why Oliver and Nathan are so concerned about what Mike is doing, as he essentially is using the clinic for his own greedy reasons — even if he is also helping the affected miners. I also really liked Katrina and Rachel's arc. It was fun to see them working together, and touching when Katrina told Rachel how proud her father is of her. Could Rachel be having second thoughts about joining her father's practice? Probably not.

Ultimately, "Admission of Guilt" did what we would hope for the third-to-last episode of the season: keep the audience on the edge of their seats. Going into the final two episodes, we do not know whether Mike will become a lawyer, whether he will ultimately stay at the clinic or if there will be any consequences to Harvey's continued efforts to get Ross admitted to the bar. And these are only a few questions that may be answered.