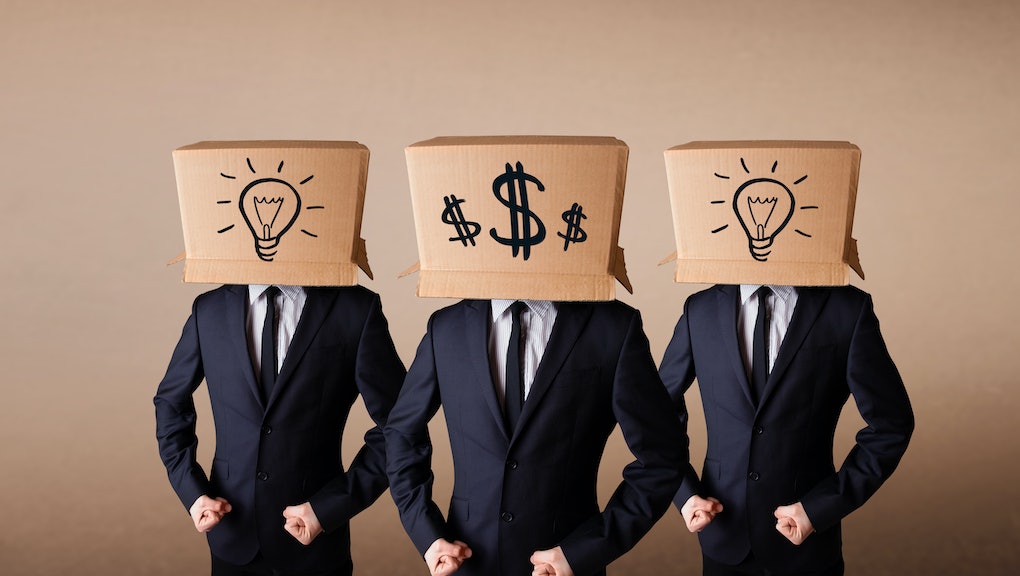 These 3 huge mental blocks are stopping you from getting rich

Money: We all want it — lots of it. But to become one of the few people who doesn't have to worry about debt, rent or having enough in a rainy day fund takes work — lots of it.

Given that the majority of Americans report living paycheck to paycheck — and 2 in 3 of those earning the minimum wage actually can't make ends meet, according to a CareerBuilder survey — the dream can feel more like a struggle.

But all hope is not lost, author and self-made millionaire Steve Siebold said in an email exchange and phone interview with Mic. Siebold, who wrote How Rich People Think, interviewed more than 1,000 of the wealthiest people in the world and has crucial advice for middle-class folks trying to break out of financial ruts and into the 1% — or at least the 10%.

"People are struggling with money in the richest country in the history of the world and a lot of it is due to misunderstanding," Siebold said. "I think the average person associates so much negativity with money."

Changing how you think about money will make you better at getting it, he noted: "Belief creates behavior and behavior creates results." Indeed, there are several big brain blocks that might be standing in your way. Avoid them, and you'll get closer to your proverbial vault of gold, according to Siebold.

Here are three big mental mistakes to watch out for.

1. Thinking you're not smart or talented enough to make it

Fear of failure plagues everyone; it's part of the human experience. But it's something you need to overcome to make big bucks.

"The idea that these people who've gotten rich are better, faster, stronger, smarter... they are not," Siebold said. "I've personally interviewed these people. I have experience firsthand and I can tell you they're not better than anyone else. Most anyone is capable of making money."

The notion that going to an elite university like Harvard is a prerequisite for making millions is also a myth, he contended. People good at making money are educated, but may draw knowledge from many sources, including books, radio programs or a mentor's advice.

Perhaps even more importantly, Siebold noted, people should not be afraid of failure, which is "a necessary building block of mega-success, and should be treated as a teacher."

"Be focused on learning, growing and becoming," he added. "Every self-made millionaire has failed multiple times. That’s why they’re so successful."

2. Believing money is an oppressor — and will take you away from your family

"The average person would rather think about anything other than money because of the negative feelings they associate with it," Siebold said.

"Stop seeing money as a never-ending necessary evil that must be endured as part of life," he added. "Start seeing money as the great liberator that will help you purchase financial peace of mind."

Other financial advisers have similarly argued that having a positive outlook makes a huge difference when it comes to achieving money-related goals.

It's true that working hard for a living will take you away from friends and family — especially during the earlier parts of your career.

You don't want to be the Don Draper of dads, providing your kids with financial security — but also with a desperate need for therapy. But that's an argument for being extra thoughtful about maximizing salary and work-life balance by seeking out great jobs and using smart time-management skills.

Your family can even be a motivator.

Use the desire to take care of them and provide your children with as many opportunities as possible as a reason to focus on wealth acquisition.

Bear in mind that financial security can relieve the pressure of having to work around the clock. So it might be worth the hard grind for a few years to attain freedom to spend time with family — once you're rolling in dough.

3. Fearing you will have to sell your soul

You might rightfully believe there's nobility in focusing on people instead of wealth. But you can channel your drive to change the world — for good — into motivation: "The human mind is wired to want more," Siebold wrote. "This drive is the engine behind every innovation in history... Ambition is a virtue."

As billionaires Bill Gates and Warren Buffett have taught the world, humanity is not always at odds with financial success.

If you worry (again, rightfully) that money will make you more out of touch, just remember that philanthropy is an option, Siebold said. You can give back and donate all the money you want to charities once you're rich — but you do have to focus on making money first.

If you are just scraping by, there is no dearth of literature on small or fun ways you can save money. That alone might not make you the next Gates, but it puts you on the right path.

Then you can channel financial pursuits into activities you find fun, and even love. Unhappiness may drive you to change career paths, but once you find your calling, it will get easier to make expert moves — like negotiating salary and becoming a boss — that will help you earn bigger bucks.