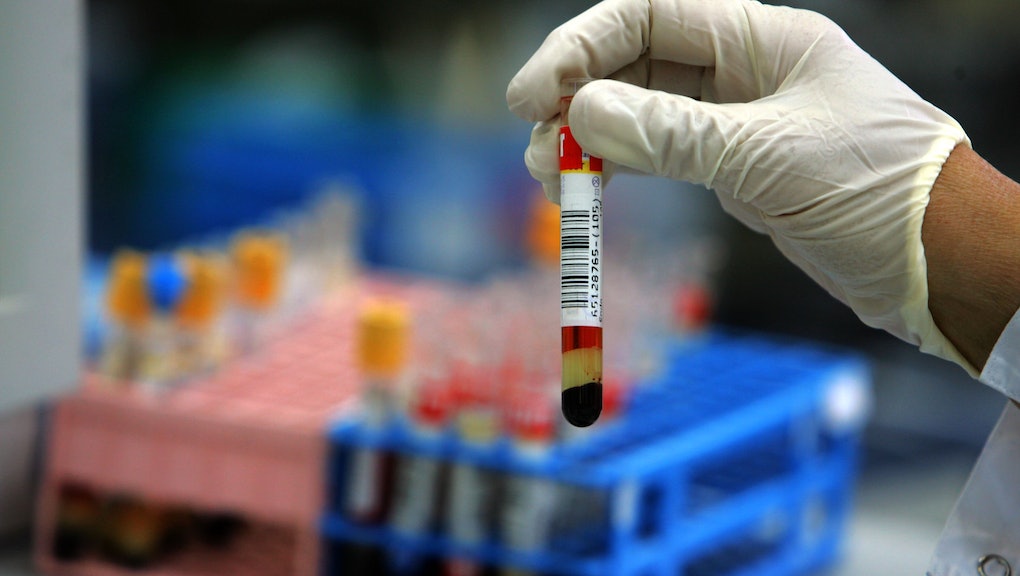 How long does marijuana stay in your system? How THC blood tests work, and what you should know

Even after a marijuana high wears off, traces of the drug remain in your blood. The tell-tale molecule is THC, weed's main psychoactive chemical.

But exactly how long does this stuff hang around? That depends on a few different factors, the most important being how you consume marijuana — and how often.

How THC gets into your blood

When you inhale weed smoke, THC has a direct line into your bloodstream via the lungs. The 2012 paper "Chemistry, Metabolism and Toxicology of Cannabis: Clinical Implications," published in the Iranian Journal of Psychiatry, describes how THC is "rapidly absorbed through lungs after inhalation" and "quickly reaches high concentration in blood," which travels through the lungs to be oxygenated by the air you breathe.

Weed consumed in edible form, however — which can have stronger, longer-lasting effects — is largely metabolized by the liver, greatly reducing the overall amount of THC that enters the bloodstream. "Ingesting edibles introduces only 10% to 20% of THC and other cannabinoids to the blood plasma, whereas inhaled cannabis falls closer to 50% or 60%," according to Leafly.

Where it gets interesting, however, is how THC sticks around after you've enjoyed its immediate effects.

How THC stays in your blood

Because THC is fat-soluble (as opposed to, say, alcohol, which is water-soluble), it penetrates your fatty tissues as it gradually disappears from the blood. The result is that you can retain active THC in your fat deposits for about three weeks. And as your body metabolizes that fat, it slowly redistributes the THC back into your bloodstream. The more one uses marijuana, the more THC gets stored for later release into blood.

You can retain active THC in your fat deposits for about three weeks.

But THC concentration in blood plasma peaks three to 10 minutes after inhalation, or one to two hours after oral ingestion. The amount of THC found in your blood in the days and weeks afterward is residual by comparison, and certainly doesn't indicate that you're stoned the whole time: The high from inhalation, by comparison, lasts just two hours, and an edible high can typically last about four to six hours. In other words, trace amounts of THC don't reveal a whole lot about how much weed you've consumed, or when — only that you did so in the not-too-distant past.

Why does that matter? Because THC is what shows up on a blood test.

How blood tests for marijuana work — and why they fall short

Blood-based drug tests screen for a wide variety of illicit substances and have short detection windows for most, meaning they're typically used to establish very recent drug use. THC can be undetectable by blood test as soon as six hours after it enters your system — even though it's still there in trace amounts — and heavy smokers may test positive for up to 24 hours.

THC can be undetectable by blood test as soon as six hours after it enters your system.

This relatively small window is one major reason employers tend to prefer simple urine and hair tests, which may reveal a single instance of marijuana use within the past week and habitual use over several months, respectively. Blood tests are considered better-suited for, say, DUI investigations, when law enforcement is trying to gauge a suspect's current level of intoxication.

But while THC may show up in someone's bloodstream, there's no scientific way to judge levels of impairment on this measurement. Also, as mentioned above, a potent edible won't necessarily do much to alter the THC content of a user's blood: Inhalation, while it produces a shorter high, delivers "a hundredfold difference" in the amount of THC that makes it into the blood.

All this makes blood-based legal limits for drivers problematic. As the Chicago Tribune reported, citing a study by the AAA Foundation for Traffic Safety:

Marijuana is not metabolized in the system in the same way as alcohol. So while a person with a blood-alcohol level of .08 or higher is considered too drunk to drive, it's not possible to say the same thing absent other evidence about a person testing at five nanograms per milliliter of blood of THC — the level used to find impairment by Colorado, Montana and Washington, the study found.

DUI attorneys have noted that the five nanogram thresholds represents an amount of THC that chronic users could have in their bodies at all times, regardless of whether they'd consumed cannabis within the last couple hours.

Can THC stay in your blood forever?

Smoking weed once doesn't mean there will always be THC in your blood — in fact, it won't be there very long at all. But research shows habitual users retain "substantial whole blood THC concentrations" for several days after going cold turkey. In effect, this means that people who continue to consume marijuana frequently will always have some THC in their blood.

Yet even a chronic, heavy smoker can fully detox by abstaining for a long enough period, and the neurocognitive effects of constant low blood THC concentrations aren't well understood. Preliminary findings are more focused on how ongoing marijuana usage may alter brain chemistry, and scientists have established that THC can be measured in the brain even when it's no longer traceable in blood. All in all, then, the ability to quantify blood THC content is maybe less useful than it sounds at first.

Still, we know it's there a good while after the buzz has faded — sort of like that friend you invited over for a joint who now can't seem to get off the couch.

Keep up to date with the ever-changing landscape of legal marijuana. From fluctuating weed prices to the health benefits of vaping, the science of drug tests to hot new trends like microdosing, you’ll always know the key facts in a confusing culture where misinformation is all too common. Stay abreast of states looking to reform their laws, learn the terminology, discover groundbreaking advances in cannabis treatments and find out what America’s favorite semi-illicit substance can do for you.

This article was originally published on Feb. 21, 2017