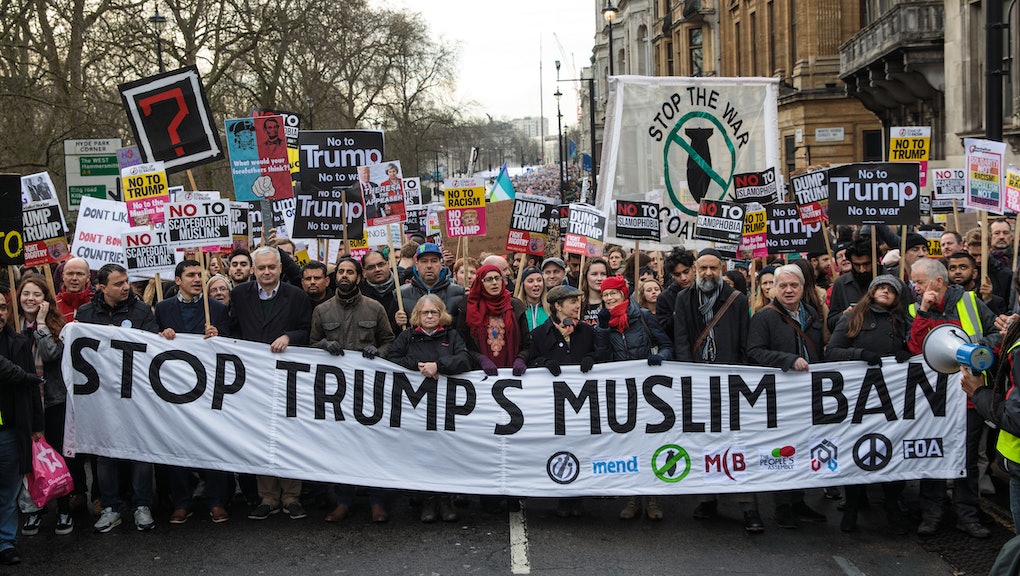 Anti-Trump protesters don't care about his Russian ties. They've got a much bigger agenda.

When news broke Monday that national security adviser Michael Flynn resigned from his position after revelations about his communications with Russian officials, the fever pitch around the Trump administration's relationship with Russia reached a new high. Democratic Party legislators released indignant statements and are calling for investigations. Major media organizations are obsessively covering the minutiae of team Trump's alleged contacts with Russian officials.

But among both the organized and spontaneous protests that have swelled nearly daily in the nation's streets since President Donald Trump's inauguration — for immigration, for women's health care, workers' rights or any number of other causes — Russia is largely missing from the program. Instead, many organizers dismiss the focus of the Democratic Party and the media on Trump's Russia ties as a distraction from the real problems facing everyday Americans and, at worst, as an excuse not to reform the liberal party in alignment with the populist demands of its base.

The organizers from across the country say that mounting a resistance to Trump means confronting the ways Trump's hostility to workers' rights, banking regulations, immigrants and people of color threatens the lives of everyday people.

"When most working class people think about Donald Trump, they think, 'Crap, what about my health care,' or, 'I'm a woman, and my access to birth control is going to be taken away,'" Elan Axelbank, an organizer with Socialist Students, said in an interview. "Not, 'He's colluding with the Russian government,' which is more abstract."

Axelbank, who helped coordinate nationwide student walkouts during Trump's inauguration, said even though Trump's connections to Russian President Vladimir Putin's government might be alarming, they're fundamentally disconnected from what Americans feeling threatened or anxious about Trump's election actually care about. Axelbank reflects back to the debates, when Trump hammered home populist appeals, disingenuous or not, while his Democratic rival Hillary Clinton portrayed Trump as Putin's puppet.

"It didn't work in the general election, and it's not going to work now," Axelbank said.

In the wake of a devastating loss to a uniquely unqualified candidate, the Democrats have made Trump's alleged Russia ties a spotlight issue going forward — the new Democratic party "war room" considers the Russia narrative one of its highest priorities.

But although the occasional sign pops up at a protest parodying Trump's relationship with Putin, few to none of the hundreds of nationwide protests focus on Russia. Protesters have taken on Disney CEO Bob Iger's role as a member of a Trump advisory council, Uber's corporate relationship with the administration and the Democrats' complicity in confirming Trump's Cabinet appointments.

"This stuff around fake news and Russia, which has been the party line for Democratic leadership, isn't echoing because for most people it's not the most immediate threat posed by Trump's presidency," Keely Mullen, a national organizer for Socialist Alternative, said in an interview. "It's an outdated, Cold War-era stirring-up that shows how out of touch the leadership of the Democratic party is."

Russia's relationship with the Trump administration, of course, isn't irrelevant. Flynn's removal as a top Trump adviser is a solid victory for progressives — Flynn is a war hawk who has referred to Islam as "vicious cancer inside the body of 1.7 billion people."

But as Working Families Party representative Joe Dinkin, whose party has organized over 500 protests nationwide under the banner of #ResistTrumpTuesdays, said in an interview, progressives can condemn Trump's alleged Russian connections without also neglecting the demands of the marginalized people most threatened by Trump's agenda.

"Some activists don't like to talk about Russia because they feel it's a distraction from some very real reasons Clinton and establishment Democrats lost elections," Dinkin said. "But both things can be true at once: both that the Democratic establishment's thirty years drifting into a friendly alliance with business and finance left room for Trump's phony populism, and also that the reported connections between the Trump campaign and the Kremlin are genuinely worthy of concern."

For some organizers, the focus on Russia is more than just misdirected energy — it gives Democrats an excuse for losing that doesn't admit any degree of responsibility for their own actions.

"Blaming Russia for the Democrats' loss is a distraction, and we want no part in that," Ian Decker, a national organizer with Students for a Democratic Society, said in an interview. "What people need right now is an organized resistance to Trump to resist his measures. They don't need excuses as to why the Democrats lost."

In what Decker sees as an emergency for U.S. immigrants in college, SDS has pivoted their focus away from issues like tuition and affirmative action and toward the immediate goal of establishing sanctuary campuses and protecting college students from deportation.

"We need an organized resistance that put Trump's policies in the fire," Decker said. "We don't need excuses. We need a program of action."