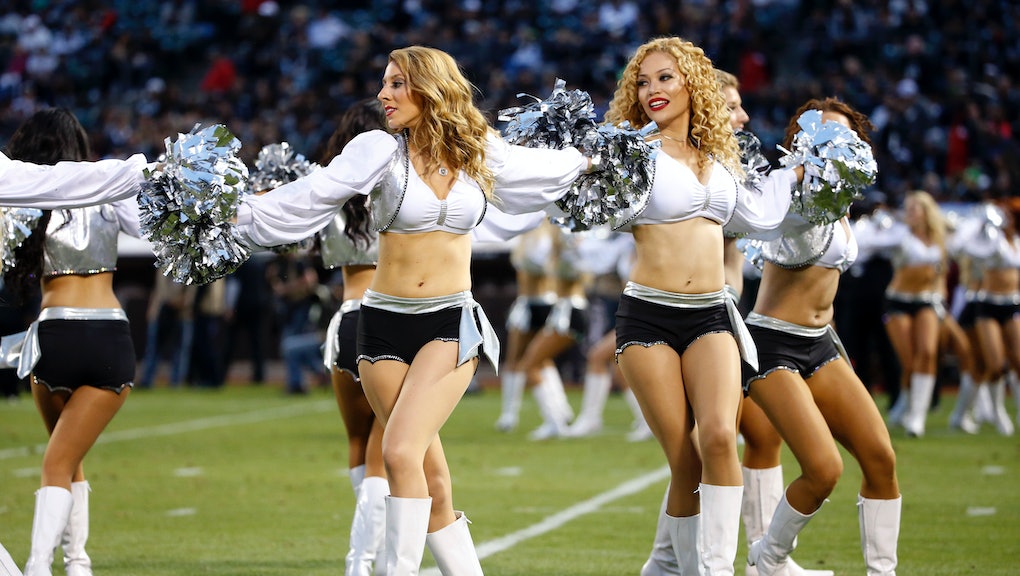 If you want to be an NFL cheerleader in California, you'll have to learn to keep your legs closed. Literally.

In 2014, the Los Angeles Times released excerpts of the 2012 Raiderettes etiquette agreement. Mic has obtained a comprehensive copy, embedded below. It provides an unsettling overview of the rigid and blatantly sexist double standards cheerleaders must endure with a smile, because "negative facial expressions" are prohibited.

The agreement details fines for cheerleaders who fail to expose their belly buttons on "2 Piece Tuesdays." It also warns performers against fraternizing with players, lest they risk "being assaulted" and ruining their "reputations."

After years of abysmal pay, cheerleaders are fighting back

This is the second lawsuit in three years over cheerleader pay in the Raiders organization. A 2014 suit alleging the Raiderettes made just $5 an hour was settled for $1.25 million after the Raiders increased hourly pay to $9 and compensated cheerleaders for rehearsals. Nine dollars was California's hourly minimum wage from July 2014 to January 2016.

The 2017 complaint alleges that NFL cheerleaders are still severely underpaid, and that the NFL and teams "manipulate the market in order to pay the cheerleaders wages below market value," the San Francisco Chronicle reported.

Caitlin Yates, a former Raiders cheerleader, told Mic her usual paycheck was $1,250, paid in a lump sum at the end of the season, minus fines and taxes. To put this in perspective, NFL mascots — like the Billy Buffalo — make between $25,000 and $60,000 per year, Yates told the Chronicle.

In a phone interview with Mic, Yates called cheerleader mistreatment a "league-wide" problem. "It's about time the NFL recognizes what they're doing," she said. "It's too much of a coincidence that we are the exclusively female athlete portion of the NFL and we're the ones being treated like this. It feels like we are being treated that way because we are women."

Yates added that many of her former colleagues feared they'd lose their spot on the team if they brought up concerns or "caused problems."

The risks may be even more severe than that. Sometimes, entire squads are cut. In 2014, the Buffalo Jills cheerleading team disbanded following a lawsuit alleging unfair pay and mistreatment. A note in the 2012 Raiderette etiquette contract explicitly indicates that the women are disposable, pointing to a team that doesn't have cheerleaders (the Green Bay Packers) and one that got rid of them (the Chicago Bears).

As the 2012 etiquette agreement reveals, Raiderettes are expected to adhere to strict regulations over their clothing, disposition and conduct around men — or risk fines.

Here are some details from the contract, reprinted in full (emphasis ours). They reveal an environment in which female professionals are liable for the whims of male athletes, where cheerleaders are sexualized but punished for their sexuality and where "morality problems" can get a whole squad fired.

Tuesdays are known as "2 Piece Tuesdays." You must wear a 2 piece outfit consisting of a sports bra-type top and shorts. The top must fit like a sports bra to reveal the body from under the bust line and form-fitting shorts (not jazz pants rolled up, basketball shorts, cutoff sweats or colored tights under the shorts) worn to reveal your belly button. Failure to do so results in a $10 fine.

In the NFL, even players' criminal activity reflects poorly on cheerleaders.

There have been a few relationships between the two groups that have resulted in a few happy marriages and lovely children. HOWEVER, we have also had more situations where, quite frankly, the Raider organization and the Raiderettes narrowly escaped ruined reputations.One such example concerns a player who gave Halloween parties every year and many of the Raiderettes attended. The same player was suspended from the team for drug use, but also arrested for date rape. For you on the squad who have attended those parties, just think how narrowly you missed having your photo in all the local papers and/or being assaulted!

Call the Raiders office to find out if a player is married.

The responsibility is on cheerleaders to investigate, not the players to tell the truth.

Make a point to find out if a player is married. In most cases, he won't tell you! You can call the Raider office with questions as to marital status and I encourage you to do so. Again, he will not tell you he's married!

Having conversations with players "does not look good to others."

There are some young men on the Raider staff who are married and yet some of the Raiderettes like to call [them] "just to chat." No matter how innocent the friendship may be, the fact that you may pop in to visit them when you are in the Raider facility does not look good to others — particularly their wives! There’s not a female alive (or male either) who doesn’t like attention. But you need to learn to deal with the attention you receive from the public (and especially the players) without it getting out of hand and going to your head.

Remember just how expendable you are.

Also, remember that fans aren't there to see you.

Keep your distance from players.

At events where Raider players are present, NEVER go up and gush all over a player, ask for an autograph or hang on his arm for a photograph. You should act like the professional you are and do your job! It is advisable to keep your professional distance from players unless requested by the client to pose for photos that include a player. Your responsibility is to the client only. You want to avoid putting yourself into an embarrassing situation or become an embarrassment to the squad because of inappropriate actions on your part.

Don't become "the topic of conversation."

DO NOT BECOME THE TOPIC OF CONVERSATION IN THE LOCKER ROOM AND/OR BY THE RAIDER STAFF. WE EVENTUALLY HEAR EVERYTHING!

No shouting and no slang, either.

The quality of your voice is also important. Speak loud enough to be heard but do not shout across a large area to another Raiderette, friend or client. Crude language, innuendos, slang and negative facial expressions are strictly VERBOTEN!

Look perfect at all times, everywhere, even off the clock.

Even when you are not working in your capacity as a Raiderette you are still representing the Oakland Raiders. It is imperative that whenever you leave your home you look "put-together" so when someone recognizes you (and they will) they can say, "Raiderettes always look fabulous." We’ve all seen the stars in the tabloids that don’t look their best. Cell phone cameras are everywhere — be camera-ready!

Any primping or fussing with your uniform, make-up or hairstyle must be done only in a restroom — never in public. The client assumes you are professional and close to perfect. Be sure you are!

The NFL will likely fight the case "tooth and nail."

According to Thomas O'Brien, one of the attorneys at the firm representing the cheerleaders, these rules demonstrate how the cheerleaders are "treated like children … expected to fulfill an archaic, 1950s fantasy of how women should behave in public."

"These women also put a lot of effort and energy into what they do," Drexel Bradshaw, another attorney on the case, added. He called the NFL "an incredibly misogynistic environment … I don't know why it's permitted to exist. I'm doing what I can to change it and make it better."

Bradshaw said that he thinks the NFL and its teams will fight the case "tooth and nail." He anticipates the NFL will file a motion to dismiss it "in an effort to stave off the inevitable."

Yates said that it is "appalling" to her that the NFL hasn't made a public statement yet regarding the way it treats its female athletes.

"I can't believe it myself that this has been going on for so long and I think the reason it has been going on for so long is that they just instill this fear in these women that they just can't speak up for themselves and they are just lucky to be there so they just need to shut up and do their jobs," Yates said. "I loved being a Raiderette, but that doesn't mean we can't be treated well."

The Oakland Raiders did not respond to our request for comment.

If you are a current or former NFL cheerleader, we want to hear from you. Please email melanie@mic.com.