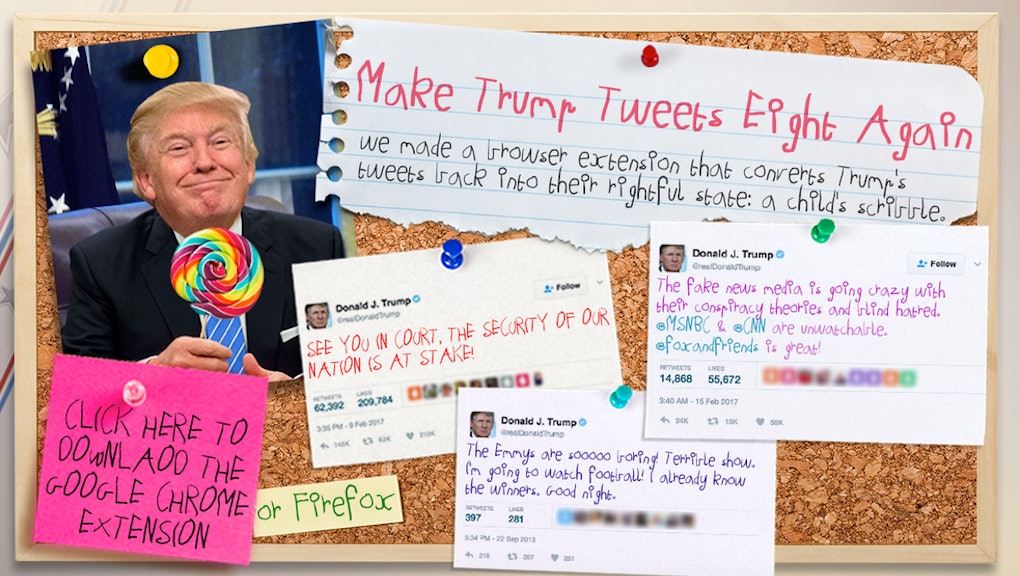 President Donald Trump is an active user on Twitter who doesn’t hesitate to share his views on everything and anything. The commander in chief has taken to the micro-blogging site to comment on everything from his casual observations about diet Coke consumption and his unverified claims about his IQ, to Katy Perry’s marriage and Robert Pattinson’s love life. He's obviously tackling politics, too. The former reality TV star has bashed his presidential predecessor, given his two cents on how to handle Ebola, accused China for making up the “concept of global warming” and called out the Electoral College — the institution that earned him the current presidency despite losing popular vote to Democratic candidate Hillary Clinton by 2,864,974 votes.

Now, for those who find the tone of America’s 45th president to err on the side of childish, there’s a browser extension that can revamp his tweets with an elementary school vibe.

The internet browser extension — free for Google Chrome or Firefox — is the brainchild of The Daily Show. Downloading the extension converts the tweets from the 70-year-old political leader into colorful scribbles of an 8-year-old.

The extension has its own website, MakeTrumpTweetsEightAgain.com, which sums up its function: “We made a browser extension that converts Trump's tweets back into their rightful state: a child's scribble.”

Trump’s activity on Twitter has always been notorious, but now that he holds the highest office in the country, his behavior holds more impact. Intelligence and defense specialists have deemed the president’s tweeting style to be a threat to national security and Mic previously reported that Trump should probably be banned from the social media platform based on Twitter’s hateful conduct policy.