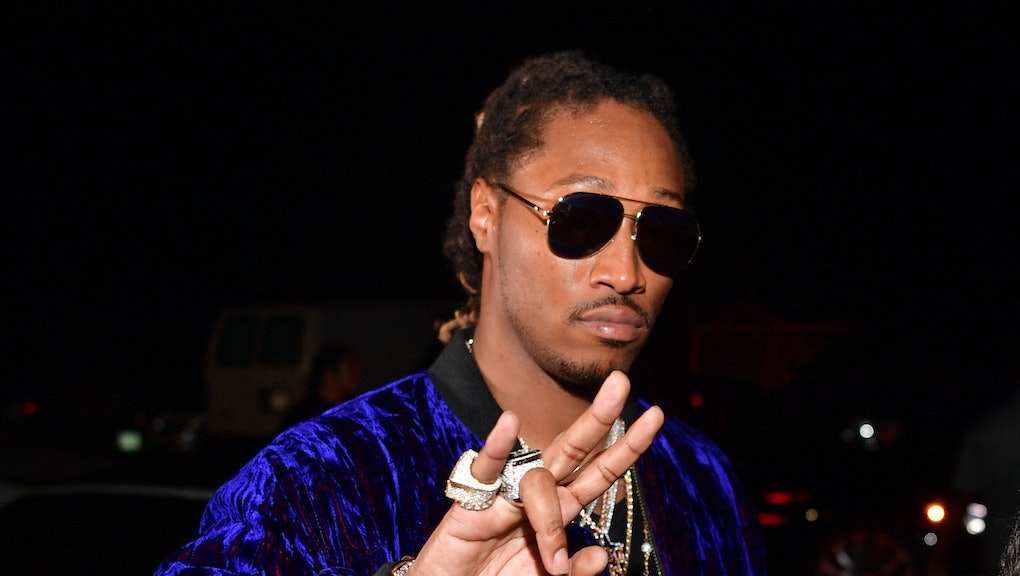 Future's new album is here: Download and streaming options for his self-titled release

With very little notice, rapper Future began promoting his self-titled opus earlier this week, and as promised, the record hit the internet today. You can download the new release via iTunes here, and stream on Spotify, Soundcloud Go and TIDAL.

This week, the rapper also revealed dates for his Nobody Safe Tour, which kicks off on May 4. Migos, Tory Lanez, Kodak Black, Young Thug and A$AP Ferg are also on the bill for select cities.

With Future's new release, we're curious to see how he'll fare against others currently ruling the hip-hop space. Migos is owning the spotlight right now with its hit song "Bad and Boujee." Its latest album Culture also topped the Billboard album chart, and Big Sean did the same with his latest, I Decided.

What we do know is Future is sticking with the formula of high-energy beats and the infectious melody-driven deliveries he's known for, based on the album's single "Poppin' Tags."

Last month, Future put out a flashy visual for the song with a jittery beat. In the clip, he is showing off bands of money and dune-bashing on quad bikes with his crew in the middle of the desert. On the track, he also compares himself to "King Joffy Jo," an ode to the royal and fictional King Jaffe Joffer in the '80s comedy flick Coming to America. The track is produced by MP 808 and Southside, who Future has worked with previously.

In an interview with Zane Lowe on Apple Beats 1, Future expressed his goal for the new album.

"I feel like I just want to go back into being a more underground [artist]," he said. "Just reconnecting with the fans, like being more hands on, back with my fans again."

It's been almost year since Future was last on the rap scene with a full project. Back in February 2016, the Atlanta trap king brought us his fourth album EVOL, a commercial success that claimed the No. 1 spot on the Billboard 200 chart. Future never stopped working though. In 2016, he released two mixtapes Purple Reign and Project E.T. with DJ Esco.

Before the album's release, Future was very quiet about who he collaborated with. He did reveal that he would be the only artist rapping on his self-titled project, which is something he seems very proud of.

View the full track list for Future below via Apple Music: