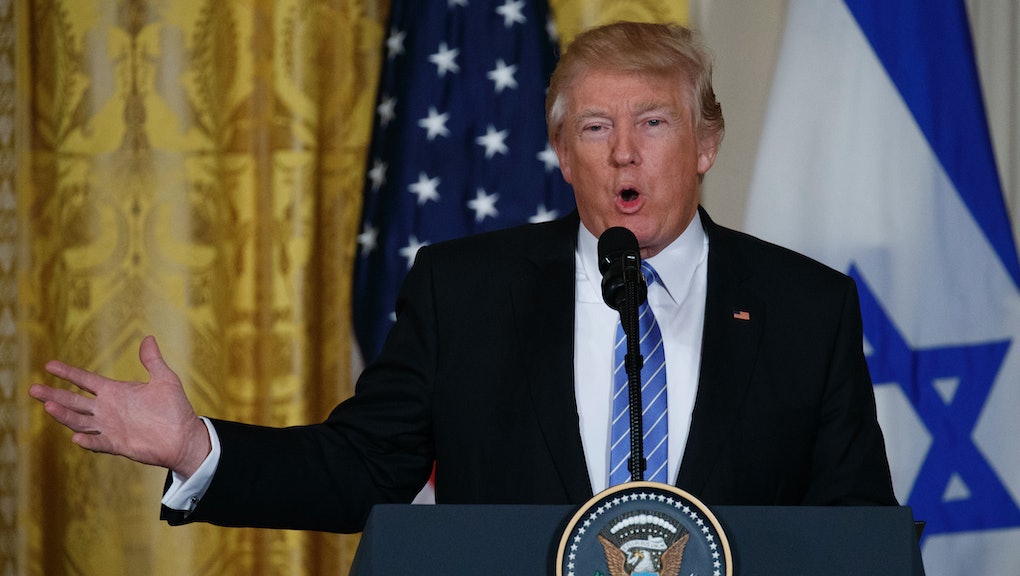 Trump and Israel: 4 things to know about Trump's relations with the US' Middle East ally

Throughout his campaign and into his presidency, Trump has been vocal in his support for the Middle Eastern country — and Israel has supported him right back. After a meeting with Israeli Prime Minister Benjamin Netanyahu in July of 2016, former New York mayor Rudy Giuliani said the country's leadership had been candid with him about its hope that Trump would emerge from the election victorious.

"They are politically aware enough to know that if Hillary gets elected, she is going to go further to her left, to protect her left flank against Elizabeth Warren," Giuliani told the Washington Post. "They know she's going to start the two-state solution thing again, cave in to the Palestinians. They realize Donald Trump can say Islamic terrorism, can stand up to it. So there's no question he would be better for the state of Israel than Hillary."

So, what else is there to know about Trump's storied relationship with Israel? Here are four things:

He recently broke with longstanding U.S. support of a two-state solution

During their first meeting since he took office on Jan. 20, Trump told Netanyahu he was open to either a one-state or two-state solution to Israel's ongoing occupation of Palestinian territory.

"I want the one that both parties want," he said.

That opinion flies in the face of the longstanding bipartisan United States commitment to developing a two-state solution, where Palestine gets to exist as as sovereign nation alongside Israel.

He recently changed his position on settlement building

"I'd like to see you hold back on settlements for a little bit," Trump told Netanyahu during the same meeting. "We'll work something out."

But as recently as last December, Trump was whistling a different tune, issuing a harsh rebuke of the Obama administration's decision to abstain from a vote on a United Nations Security Council resolution condemning such settlements, effectively allowing it to pass.

Israeli settlements are seen by Palestinians as one of the key objectives to brokering a lasting peace in the region. The desire to build more is widely believed to be a move that would threaten to ignite a situation that is already a powder keg.

While we don't believe the existence of settlements is an impediment to peace, the construction of new settlements or the expansion of existing settlements beyond their current borders may not be helpful in achieving that goal.

He wanted to move the U.S. embassy to Jerusalem, but now doesn't

"We will move the American Embassy to the eternal capital of the Jewish people, Jerusalem!" Trump exclaimed during a campaign speech in March 2016 to thunderous applause.

But like Bill Clinton and George W. Bush before him, who both advocated for the embassy move, Trump has seemingly softened his position since taking office.

During his press conference with Netanyahu, he seemingly backpedaled, acknowledging the move might be a slippery slope for the embattled region that could throw a wrench in the works for future peace talks.

Israel may have inspired the infamous "wall" being planned for the U.S.-Mexico border

Another talking point that Trump and Netanyahu can bond over is their shared affection for border walls.

During an appearance on Fox News in January, Trump suggested to Sean Hannity that it was Israel's wall which helped establish his initial vision for a stateside version of the same.

"A wall protects. All you have to do is ask Israel," he said. "They were having a total disaster coming across and they had a wall. It's 99.9% stoppage."

The interview was followed up by praise from Netanyahu by way of Twitter.

"President Trump is right," he tweeted. "I built a wall along Israel's southern border. It stopped all illegal immigration. Great success. Great idea."

That Israel's wall is regularly referred to as a "racist separation" or "apartheid" wall by the Palestinians it was built to keep out, seems to be of little consequence to the president.