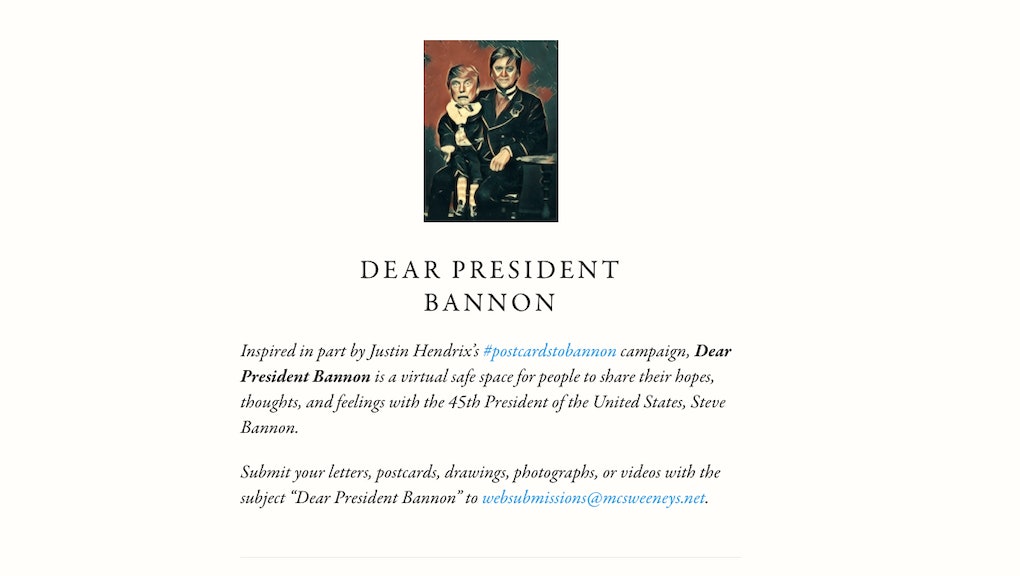 The project is an ongoing anthology of letters addressed to Steven Bannon, Trump's chief strategist, which criticizes and mocks the administration with satire. Dear President Bannon started after Justin Hendrix, executive director of NYC Media Lab, started the #PostcardToBannon campaign to get people to send mail to the White House addressed to "President Steve Bannon" rather than Trump. That initiative started after reports announced Trump appointed Bannon to the National Security Council, which gave him more power in the White House.

Wajahat Ali, one of the creators of Dear President Bannon, who is a Muslim American playwright, said the concept of addressing Bannon rather than Trump is a big blow to the president's ego.

"Each time we say 'Dear President Bannon,' there's a small dagger in his orange heart," Ali said in a phone interview with Mic.

In "We Can See The Boils," Aslan addressed Bannon in a video message congratulating him in shifting to "human form" and warning him that he has a "distinct smell of sulfur."

Bush then wrote a tongue-in-cheek short letter titled "I Had No Idea You'd Be Leading The Charge as Puppet Master."

"I’m amazed everyday by how far you’re able to get one hand up Trump’s ass, while making shadow puppets dance on the wall to keep him from reading anything you put on his desk," Bush wrote. "You’re a true talent."

Ali said that the responses so far have been overwhelmingly positive, but there are times when people think the jokes about the Trump presidency are a bit "too soon."

"The very fact people are uncomfortable is positive reminder that it disturbs people — and it should," Ali said. "Using humor and satire is also a small act of resistance. Like being a wise ass, getting the collective good will of writers, artists an those in the front lines affected by these heinous policies by Bannon and Trump is a powerful act of resistance."

But Ali said Dear President Bannon is also more than a crusade against the Trump presidency. It's also an attempt to change the minds and hearts of those who were persuaded by Trump's fear-mongering.

"We're using humor and satire as a protection to go against bullies and cut down their size," Ali said. "Instead of being reactionary, we're being proactive. You can elevate and promote stories of hope and love or you can make people laugh — that also wins over hearts."