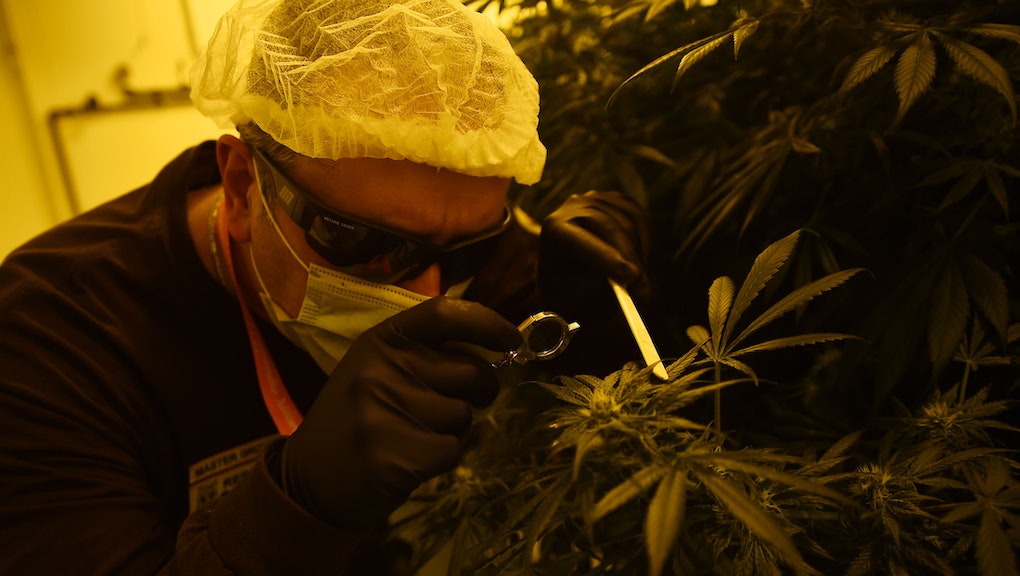 Is marijuana stronger than it used to be? Here's what the science says.

If you've ever smoked up with someone who lived through the 1960s, you may have heard them remark that marijuana is much stronger than it used to be.

But is that actually true, or just a hippie myth? Here's the straight dope.

How we measure marijuana strength

Because it's too difficult to ask Willie Nelson, we're forced to measure weed's potency the only way we really can: by examining its concentration of THC, or tetrahydrocannabinol, the psychoactive chemical that gets us high.

More specifically, we can weigh THC content of a given cannabis strain against its level of CBD (or cannabidiol), as this chemical seems to counteract some of THC's most pronounced effects. Marijuana can also be lab-tested for various other compounds, both beneficial and undesirable. But in general, the simplest way of understanding weed's potency is by analyzing its THC content.

How strong is weed today?

The legal market for marijuana means there is more variety than ever before: On the one hand, you can find high CBD weed with THC concentrations of just 1%, ideal for patients who want to use marijuana without being impaired. Meanwhile, breeders are creating stronger and stronger high THC strains.

The progression of High Times' annual Cannabis Cup competition is a good indicator of that trend. In 2011, it named Ghost Train Haze the most potent strain of the year at 25.49% THC. The same strain won the cup in 2014, this time testing at around 27.46% (it's important to note that a strain's potency isn't fixed but fluctuates according to growing conditions and cultivation methods).

The 2016 contenders were even stronger, with Los Angeles dispensary Greenwolf's Cookie Dough weighing in at 31.1% THC, and Denver's Next Harvest producing a strain of Chem Dog that tested at 32.13% THC, setting an all-time record.

It's not a stretch to say this is some of the most potent weed on the planet — but then again, it's not what the typical consumer is smoking. Your dispensary's strongest stuff is more likely to fall in the mid-20% range for THC content, and the overall THC average for a legal market tends to be lower still: In Colorado, for example, it's 18.7%.

How strong was weed back then?

Here's where things get a little tricky.

When you see headlines declaring that today's marijuana is three times as potent as it was in the 1980s, or far stronger than it was 20 years ago, the accompanying article often cites the general statistic that old-school weed had THC concentrations of 10% or less. But there's reason to be skeptical of that number, in large part because — as the Atlantic reported in 2015 — the federal data it's based on is incomplete, and the information we do have about marijuana from bygone eras may be riddled with inaccuracies.

In the Atlantic article, Michael Kahn, president of Massachusetts Cannabis Research Labs, pointed out that gas chromatography, the government's preferred method for testing marijuana potency, alters the chemical profile of the weed itself, "including breaking down the THC molecule." No wonder it seemed less potent — they were cooking the THC right out of it.

No wonder it seemed less potent — the researchers were cooking the THC right out of it.

Combine problems like this with the fact that scientists working for the National Institute on Drug Abuse are frequently limited to studying cannabis that has been seized by police, and you begin to see the patterns that may lead to faulty conclusions: The weed analyzed in a given year also could have mostly come from a single region, or a specific grower, thereby skewing the THC results, as when officials were sampling a Mexican strain with THC levels that hover somewhere between 0.4% and 1% — pretty weak grass.

Whatever the imperfections of these methods though, there appears to be broad consensus that even as recently as the 1990s, weed was nowhere close to Colorado's 18.7% THC average, let alone the ultra-potent 30% threshold. In every trend analysis we have to rely on, weed has gotten stronger over time.

So, weed is definitely stronger now?

It's understandable that old hippies would say marijuana is stronger now, because in truth, stronger marijuana is more widely available. As some growers try to push the envelope without fear of police intervention, however, others are custom-engineering strains for all kinds of specific medical needs, and in some cases actually diminishing the amount of THC in their bud.

In every trend analysis we have to rely on, weed has gotten stronger over time.

Yet the overall trend, as with so much in American life, is toward bigger, badder, brawnier product, which means more THC-rich weed. Sure, it's conceivable that someone was smoking 30% THC pot back at Woodstock, but it's undoubtedly easier to get your hands on some now than it was in 1969. When we talk about marijuana being stronger today than it was a few decades ago, we're really talking about how the drug went from being an illicit commodity to the cornerstone of a regulated — and very profitable — national business.

Keep up to date with the ever-changing landscape of legal marijuana. From fluctuating weed prices to the health benefits of vaping, the science of drug tests to hot new trends like microdosing, you'll always know the key facts in a confusing culture where misinformation is all too common. Stay abreast of states looking to reform their laws, learn the terminology, discover groundbreaking advances in cannabis treatments and find out what America’s favorite semi-illicit substance can do for you.