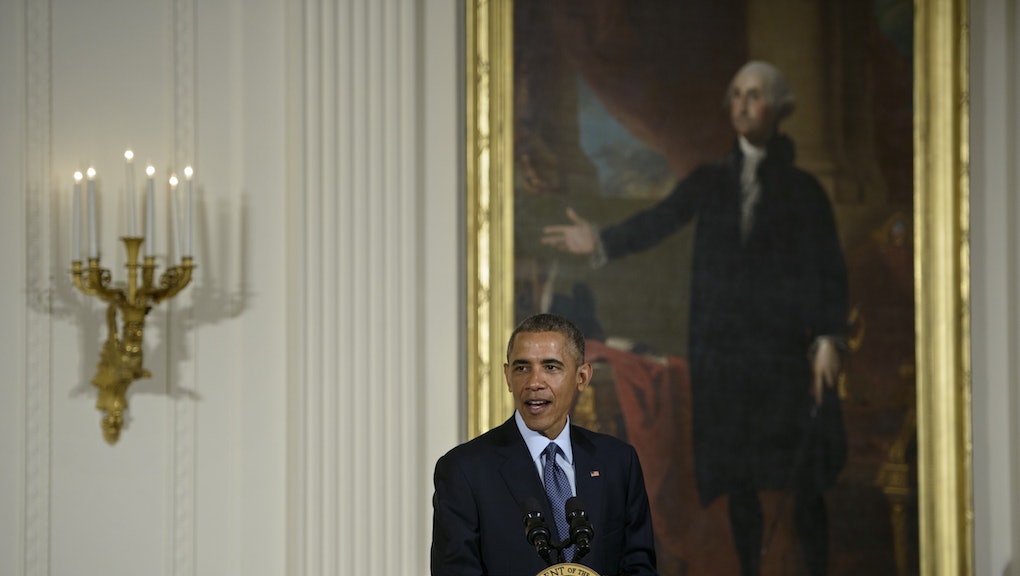 As U.S. presidents take their place in the history books, their lives and terms in office are usually accompanied by a fair share of urban legends.

From George Washington to Barack Obama, presidencies have been marked as much by their accomplishments as the false narratives others try to keep alive.

Here are four presidential myths that just don't stand up to scrutiny.

George Washington and the cherry tree

Beyond his role as the nation's first president and commander of American troops in the Revolutionary War, many likely remember Washington as the honest boy who couldn't tell a lie. As a child, the story goes, Washington chopped down his father's cherry tree. When asked if he knew what happened to the tree, Washington confessed he was the culprit, explaining, "I cannot tell a lie ... I did cut it with my hatchet."

However, while it makes for a good anecdote, the story simply isn't true. Washington's Mount Vernon estate, now a museum about the commander-in-chief, explains on its website that the myth originated with an early biography of Washington. Author Mason Locke Weems was eager to fulfill Americans' curiosity about the president and paint him as a man of "great virtue" — as the cherry tree story demonstrated.

"Washington you know is gone! Millions are gaping to read something about him," Weems told a publisher in 1800, according to the Mount Vernon website. "My plan! I give his history, sufficiently minute ... I then go on to show that his unparalleled rise and elevation were due to his great virtues."

The myth took on a life of its own, reaching millions of schoolchildren through 19th-century grammar-school textbooks McGuffey's Readers. In the 1830s, legendary showman P.T. Barnum further spread the myth through stories told by Joyce Heth, a woman in Barnum's sideshow whom he falsely claimed had raised George Washington.

Another falsehood about the first president? Contrary to popular opinion, he never wore wooden teeth.

As perhaps the two highest-profile presidents to have been assassinated, Abraham Lincoln and John F. Kennedy have become inextricably linked. This connection, though, is no accident. The seemingly spooky parallels between the two presidents were first compiled in a GOP Congressional Committee Newsletter in 1964 and have perpetuated ever since.

The list of parallels includes everything from the presidents' surnames both having seven letters to their assassins, John Wilkes Booth and Lee Harvey Oswald, both having three names. These, along with some other facts, are coincidentally true, if pretty inconsequential: Lincoln was elected in 1860 and Kennedy in 1960, for instance, and both were shot on a Friday.

Other connections, however, are not quite so verifiable. A 1964 Time article pointed out that contrary to the claim Booth and Oswald were born in 1839 and 1939, respectively, Booth was actually born in 1838. The Time article also refuted the "connection" that Booth shot Lincoln in a theater and was captured in a warehouse, while Oswald did the opposite. Booth, in fact, was captured in a tobacco-curing barn, not a warehouse.

Another false connection is the assertion that the two presidents' secretaries had the other's last names. While Kennedy did have a secretary named Evelyn Lincoln, Lincoln had no known secretary with the last name of Kennedy. His White House secretaries, rather, were John G. Nicolay and John Hay.

Though Bill Clinton's presidency contained its fair share of infamous scandals, it didn't include serial murders. A list of dead people connected to the Clintons — insinuating the former president played a role in their deaths — has been circulating since Clinton's presidency, Snopes noted.

The list first originated with Linda Thompson, a lawyer and leader of the right-wing American Justice Federation, and was later perpetuated in a 1994 letter to Congress by Rep. William Dannemeyer, who called for hearings after listing 24 Clinton-affiliated individuals that died "under other than natural circumstances."

Though the Clintons' perceived connection to these deaths persisted — even during Hillary Clinton's presidential campaign — there has never been any evidence to back them up. In a 1994 article from U.S. News and World Report that was entered into the official congressional record, Thompson even admitted her claims "seem[ed] groundless" and that she had "no direct evidence of Clinton killing anyone."

The alleged murders are also easily explained by far less sinister causes. For example, James McDougal, a key figure in the Clintons' "Whitewater Scandal," died of a heart attack after suffering from a pre-existing heart condition. Meanwhile, C. Victor Raiser, former co-chairman of Bill Clinton's presidential campaign, died in a plane crash, which the National Transportation Safety Board determined was caused by "the pilot's delayed decision in reversing course and failure to maintain airspeed during the maneuver."

Obama is a Muslim

No matter how many times it's been refuted, many Americans still choose to believe former President Barack Obama is a Muslim. A 2015 CNN poll revealed 29% of Americans thought Obama was a follower of Islam, while Public Policy Polling found that 66% of Trump supporters in 2015 believed the same.

Though Obama's paternal grandfather was Muslim, Politifact reported, his father — with whom he had little contact — later adopted atheism, and there is no evidence suggesting Obama was influenced by Islam. Claims that Obama attended a radical Muslim school and was sworn into the Senate using a Quran have been thoroughly debunked.

Obama himself openly mocked these claims at the 2015 White House Correspondents' Dinner: "Being president is never easy. I still have to fix a broken immigration system, issue veto threats, negotiate with Iran, all while finding time to pray five times a day."

Instead, the evidence — including Obama's own words — all points to him being a Christian, a religion the former president said he adopted while working as a community organizer in Chicago.

"It was because of these newfound understandings that I was finally able to walk down the aisle of Trinity United Church of Christ on 95th Street in the South Side of Chicago one day and affirm my Christian faith," Obama said in a 2006 speech, according to Politifact. "It came about as a choice and not an epiphany. I didn't fall out in church. The questions I had didn't magically disappear. But kneeling beneath that cross on the South Side, I felt that I heard God's spirit beckoning me. I submitted myself to his will and dedicated myself to discovering his truth."

Though all the evidence points toward Obama's Christianity, it seems many conservatives doubt his religion because his values simply don't align with theirs.

"[Obama] states he is [a Christian], but we look at people by the fruit that they portray," Heidi Pezdek, an attendee at the religious conservative conference Values Voters Summit, told the Huffington Post. "What I'm looking at is his stand for abortion and support for Planned Parenthood, which is murder, murder in the womb, and his strong support of the LGBT lifestyle community."