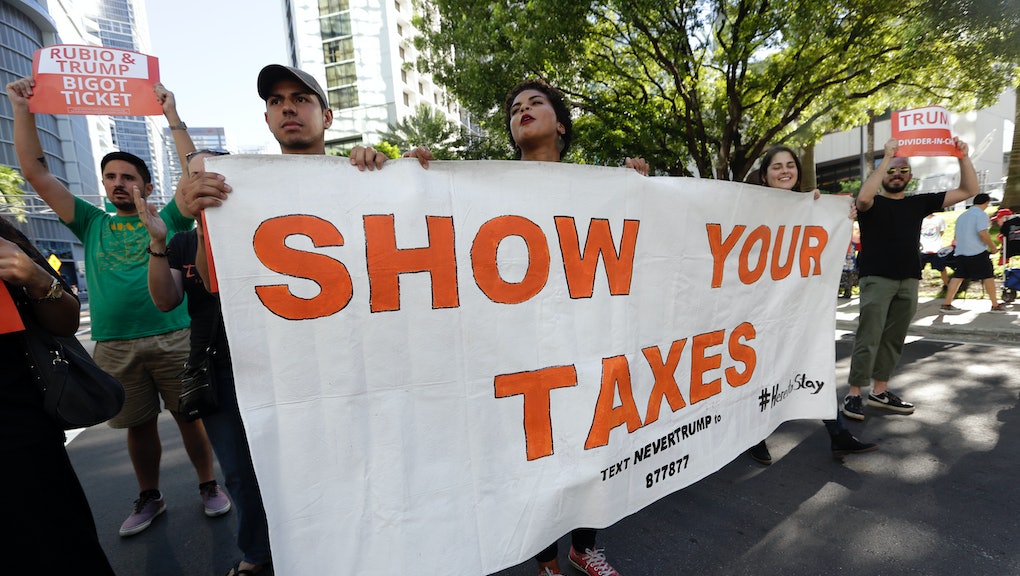 Opponents of Donald Trump — including leaders from the Jan. 21 Women's March on Washington — plan to stage a large scale protest in Washington on April 15 to demand the president release his tax returns.

On Tax Day, a coalition of liberal groups will lead a march from the U.S. Capitol to the White House. Protests will be held in other cities around the country, as well.

"Tens of thousands of Americans will send a clear message to Donald Trump," according to the organizers. "The president is accountable to the American people, and he must answer to us."

Trump broke with historical precedent by not releasing his tax returns during his run for the White House, claiming — falsely — that he could not release them because he was under audit.

On Oct. 1, a New York Times report found that Trump had declared a loss so large on his taxes in 1995 that he may have been able to avoid paying taxes for 18 years. But Trump still refused to release his full tax returns, leading critics to wonder if he was as rich as he claimed to be or if he had something to hide.

In January, after assuming the presidency, the Trump team announced he would not release his tax returns because "people didn't care." But an ABC News/Washington Post poll showed 74% of Americans, including more than half of Republicans, wanted to see Trump's tax returns — something the Tax March organizers are hoping to show the administration.

"On April 15, we’re marching on Washington, D.C., and in communities across the country to show that we do care," the organizers wrote on their website. "And that we’re not going away."