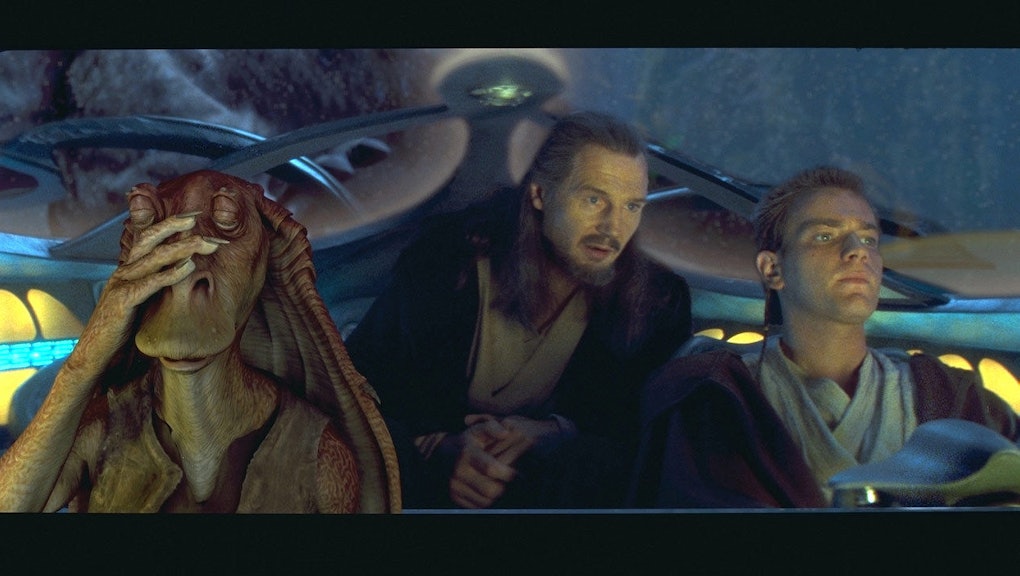 Once upon a time, Star Wars creator George Lucas said that "Jar Jar is the key to all of this," when discussing the new Star Wars prequel trilogy. Well, the talkative Gungan was a major factor, to be sure, but not in the way Lucas would've hoped. Jar Jar, who, aside from the potentially racial stereotypes he embodies, is considered to be the most hated character in the Star Wars universe.

Not that anyone is asking, but what happens to Jar Jar after the events of the prequels? He isn't a secret Sith Lord, despite the mounting evidence that "Darth Jar Jar" could've been a thing. The canonical answer to Jar Jar's fate, however, is immensely satisfying.

According to Mashable, the latest Star Wars novel, Star Wars Aftermath: Empire's End, reveals what happens to Jar Jar after the events of Return of the Jedi and prior to The Force Awakens. Basically, he becomes a street-peddling clown on his home planet Naboo, which meesa finds quite amusing.

As Mashable points out, the novel describes Jar Jar the clown as someone reviled and ignored by adults, though some children seem to find him funny — a perfect analogy for the initial reaction to the character in 1999's The Phantom Menace, the film in which he first appears. In a book excerpt, Jar Jar also explains why folks hate him, which also makes sense, to a refugee kid named Mapo:

"'Jar Jar makin some uh-oh mistakens,' the Gungan says, explaining why he isn’t wanted anywhere either. 'Desa hisen Naboo tink I help the uh-oh Empire.' He stares into the distance, suggesting he knows more than he’s saying."

While nothing can ever make up for the disappointment of the Star Wars prequel trilogy, we'll take small victories, like Jar Jar living out the rest of his life as a sad clown on a planet where nobody likes him. Weesa enjoy intergalactic poetic justice.