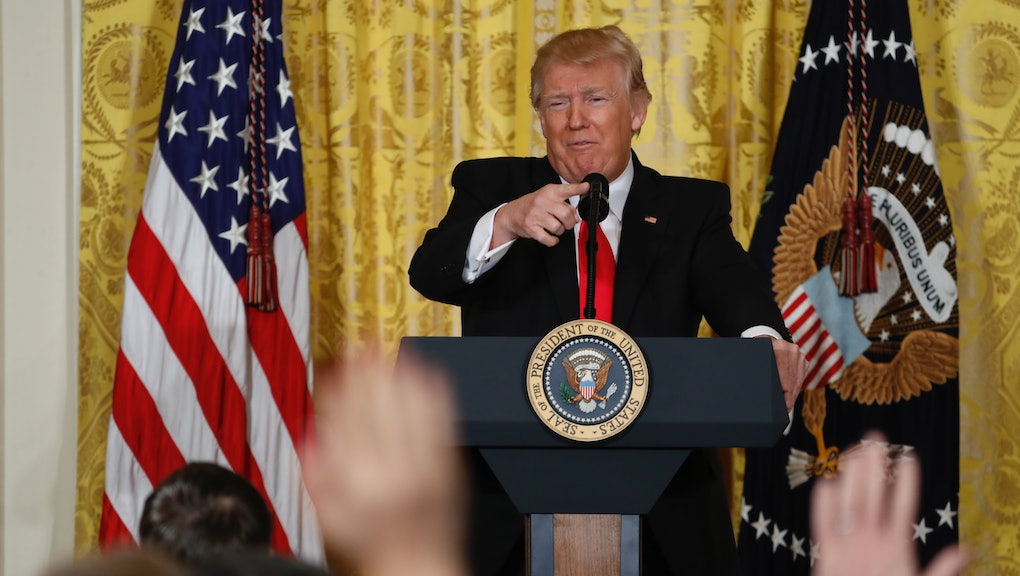 After a blistering press conference Thursday, President Donald Trump chewed out the media for supposedly delivering "fake news." Then he blasted his email list.

"You — the American people — are our last line of defense against the media's hit jobs," the email, which hit inboxes under a "Trump Pence 2016" banner, read.

"Which is why," the email continued, "I need you to take the Mainstream Media Accountability Survey to do your part to fight back against the media's attacks and deceptions."

The email was likely targeted at Trump's base — stirring up his tried-and-true "crooked media" narrative, especially amid chaos in his nascent presidency — and Trump critics were thrilled to comply, gleefully sharing a link to the online poll.

Neither side seemed to be aware that surveys of this sort are a classic tool used to gather personal data and contributions. On this much, at least, Republican and Democratic experts agree.

"Campaigns regularly use these 'surveys' to engage supporters and make them feel heard," Michael Spitzer-Rubenstein, whose consulting work for Democrats focuses on digital engagement, said in an email. "It's not at all statistically valid and no one should pretend that it's anything more than a fundraising tactic."

He boiled the purposes of such "polling" down to two: microtargeting respondents' interests and pushing an agenda.

Ian Patrick Hines, a Republican digital strategist, added that those who think they're fighting "the man" by filling in left-leaning survey responses or submitting fake names and emails aren't striking a blow to the Trump administration.

"What actually is going to happen is you're helping 'the man,'" Hines said. Real supporters, he said, will give more useful specifics on what they care about — and potentially money — while haters will simply be identified and filtered out of the database.

In fact, the wave of attention from critics seemed to directly encourage the Trump-RNC team to push out the survey again Friday by email and also via text message.

"The President emailed you to take the urgent Mainstream Media Accountability Survey. Since then, mainstream media outlets have viciously attacked it... and thousands of Democrats have taken it to try to sabotage the results," an updated version of the email read.

Filling out the survey, including providing a first and last name and email contact, brings the user to a donation page.

An RNC spokesman didn't respond to questions Friday about how the results of the survey would be used or whether they'd be made fully public.

Additionally, there's the possibility that even Trump opponents who don't donate a cent or who give fake identification when submitting the survey could be allowing basic data to be harvested from their devices.

Even people who merely open the page without answering any of the questions could be unwittingly sharing data.

One Twitter user, Sam Schinke, did some digging and said he found the site did in fact include "several third-party tracking services."

This is hardly new stuff for Trump and the RNC, which re-sent the "media accountability" email after a direct link to the survey began making the social media rounds Thursday.

"I'm heading to Washington to make deals that benefit the American people," a Jan. 9 email sent under Trump's name read. "I need you to tell me which specific policies you want me to pass as your champion in the White House."

"Please complete the 2017 Priorities Survey registered in your name."