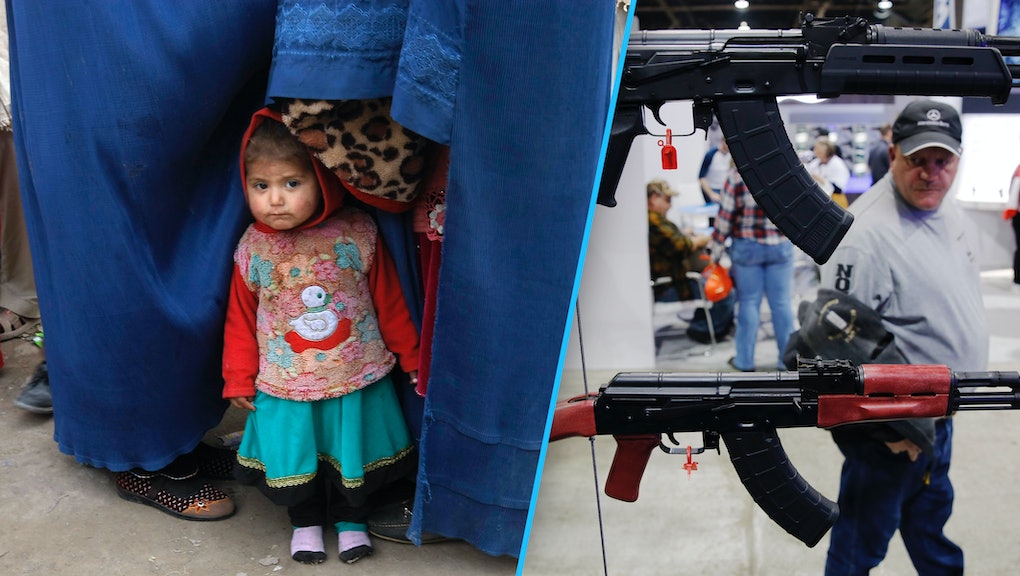 Statistically, it's President Donald Trump — a native-born American male — you should be way more afraid of killing you than a refugee.

Yet, with a twist of irony, Trump's extreme anti-immigration policies are largely founded on a rhetoric that pushes the notion that migrants and refugees are widely "rapists," "drug lords" and "murderers."

Trump's controversial immigration executive order, which was ultimately suspended, sought to halt the resettlement of Syrian refugees in the name of protecting Americans from potential attacks.

But the numbers tell a very different story from Trump's.

It would be prudent to fear a native-born American much more than a refugee, according to an analysis from think tank Cato Institute and FBI statistics.

The Cato Institute's Alex Nowrasteh did a risk analysis examining all the domestic terrorist attacks between 1975 and 2015 and who perpetrated them.

Nowrasteh found — based on all terrorist attacks over the 40-year period — that the annual chance of an American being killed from a terrorist attack committed by a refugee is one in 3.64 billion. Yes, billion.

The number becomes even more gargantuan if you apply it to undocumented immigrants — it's one in 10.9 billion a year.

Conversely, FBI estimates put the annual national "murder and non-negligent manslaughter" rate in 2013 at 4.5 people for every 100,000. Put differently, that's one person killed for 22,222 people.

The FBI uses data from the U.S. Census Bureau, which also includes "foreign-born persons" — who account for 13.2% of the population.

Given the FBI estimate is an average for the entire population, it's safe to assume the murder rate is, on average, the same for an American citizen as it is for a foreigner living in the U.S.

But even if we excluded the 13.2% foreign-born population from the FBI murder rate — so we're exclusively looking at native-born Americans — the number marginally rises to one in 22,256 persons.

However, as noted above, the average murder rate applies to all demographics.

Approaching the numbers from a different angle, the Cato Institute found 20 refugees were involved in killing Americans in terrorist attacks between 1975 and 2015. Comparatively, in 2013 alone, the FBI identified 14,132 known "murder offenders" in the U.S.

"I think there's lots of discussion and dialogue about immigrants and crime and my argument is let's have public policy that's based off data and evidence," Robert Adelman, an associate professor of sociology at the University of Buffalo and immigration specialist, told Mic. "Let's take a careful look at what the data and evidence suggest as opposed to basing public policy on ideology."

During the legal furor surrounding his proposed ban, Trump referred to some of the immigrants and refugees affected by his executive order as "bad 'dudes.'"

But if Trump were to restrict demographics in order of potential threat, he would be banned long before refugees would.

Watch Spotify and Mic's video explainer on the myths and realities of immigration below: