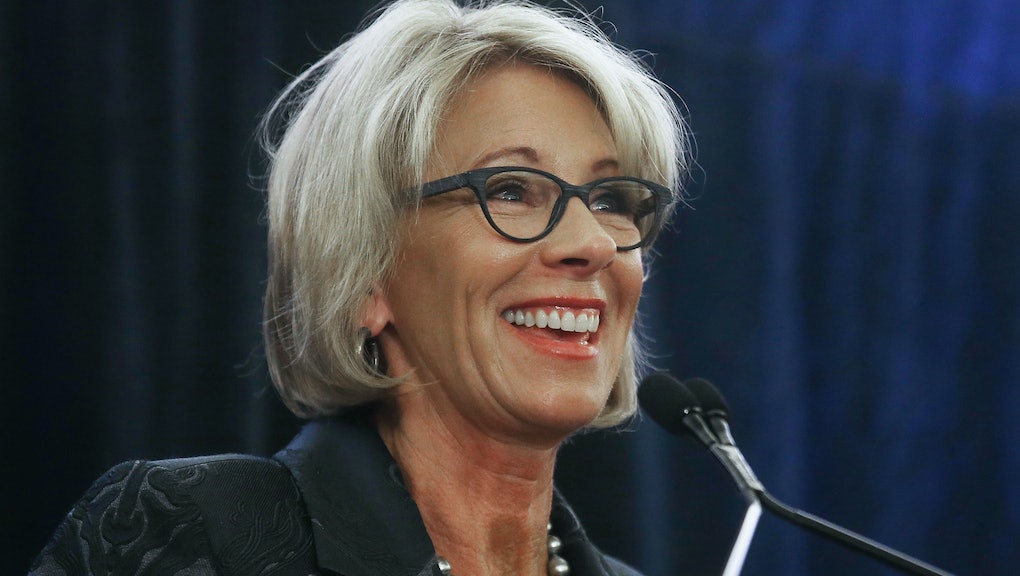 Betsy DeVos being protected by federal Marshals Service after protests

Education Secretary Betsy DeVos is receiving protection by the U.S. Marshals Service, the Washington Post reported Friday evening, after she was met by protesters at a public school in Washington, D.C.

The Washington Post reported that it's rare for an education secretary, who is toward the bottom of the order of presidential succession, to need protection from the Marshals Service, a federal law enforcement agency that transports federal prisoners, apprehends fugitives and protects members of the judiciary branch.

However, DeVos has become one of the most visible members of Trump's Cabinet, sparking outrage from Americans after flubs during her confirmation hearing.

Opponents of DeVos' nomination flooded Senate phone lines, pleading with senators to vote against DeVos and block her confirmation.

The incident that sparked the need for protective services, according to the Washington Post, happened Feb. 10, when a handful of protesters blocked DeVos from entering the school, getting in her face and yelling "shame!"

One protester was arrested for assaulting a police officer during the incident, according to a tweet from the Metropolitan Police Department.

MPD added that it was investigating whether DeVos herself was assaulted.

"Adult male arrested for assaulting a police officer," MPD tweeted in response to a video of the protest. "Report that @BetsyDeVos was assaulted is under investigation."