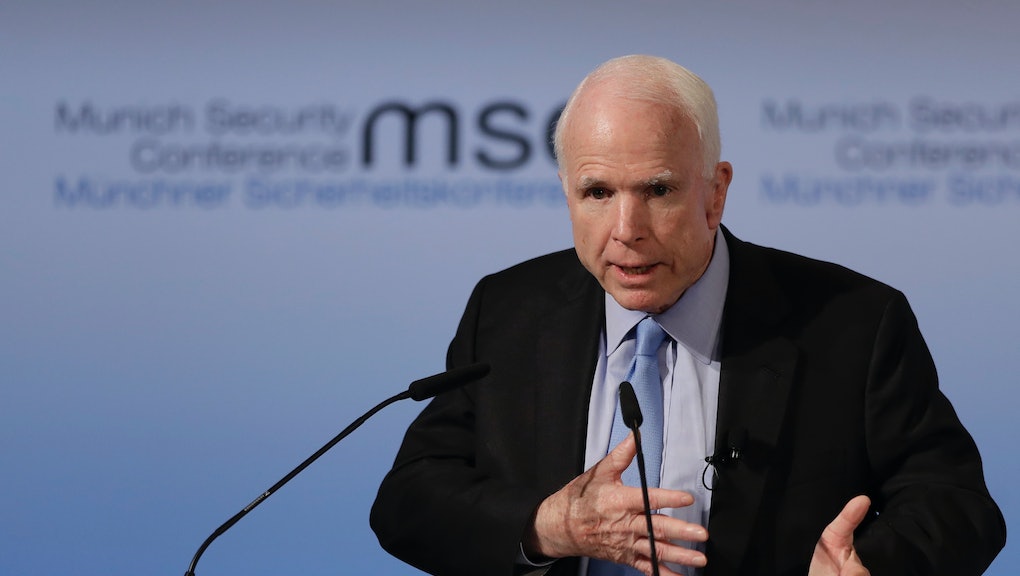 In a preview clip of the full interview, which will air on Sunday's Meet the Press, Todd read a recent tweet in which Trump claimed "The FAKE NEWS media (failing @nytimes, @NBCNews, @ABC, @CBS, @CNN) is not my enemy, it is the enemy of the American People!"

McCain's response, sure to strike a nerve, was "I hate the press. I hate you, especially. But the fact is we need you. We need a free press. We must have it. It's vital."

"If you want to preserve — I'm very serious now — if you want to preserve democracy as we know it, you have to have a free and, many times, adversarial press," McCain continued. "And without it, I am afraid that we would lose so much of our individual liberties over time. That's how dictators get started."

"They get started by suppressing free press," McCain concluded. "In other words, a consolidation of power, if you look at history, the first thing that dictators do is shut down the press. ... I'm not saying President Trump is trying to be a dictator. I'm just saying we need to learn the lessons of history."

McCain has long been one of Trump's loudest critics. During the primary season, Trump mocked the senator for being captured during the Vietnam War.

While Trump's election brought with it speculation over whether or not his more autocratic traits would soon see him ushering in a dictatorial form of government, the realities of hitting D.C. with minimal staff and experience in politics seems to have blunted the president's momentum. At the same time, Trump has doubled down on his criticism of the media, portraying it as a group of villains out to destroy him politically.

At a so-called 2020 re-election campaign rally Saturday in Melbourne, Florida, Trump told supporters the media creates "fake news," and "I will never, ever let them get away with it," Mic's Celeste Katz reported.