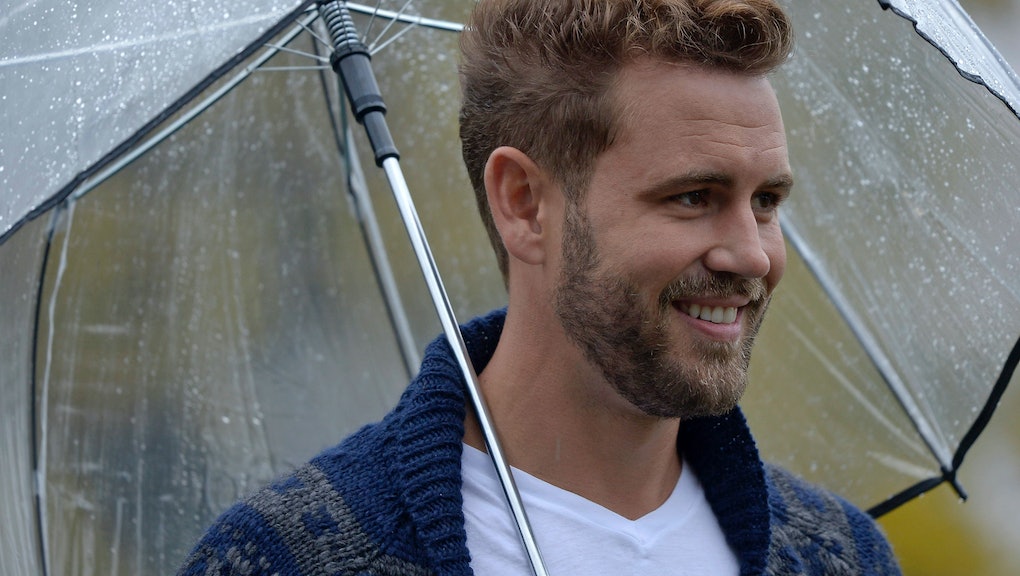 Bachelor nation: What are we doing here?

Here's a brief summary of what happened on Monday night's episode of The Bachelor: Nick Viall went to the hometowns and met the families of his four remaining girlfriends. Raven Gates was charmingly southern. Vanessa Grimaldi remained as much a frontrunner as she's been all season. Rachel Lindsay charmed us despite her inevitable fate in this competition. Nick asked the women's parents for permission to marry their daughters. Andi Dorfman, of all people, showed up at Nick's door ahead of the rose ceremony.

And yes, this means the show once again pushed off the elimination for another week. We won't get to see the next eliminee — almost certainly Corinne Olympios, disaster queen of the season — sent home.

Put aside for a moment the absurdity that Corinne has come so far, or that Rachel will be obviously eliminated next week (else drain all suspense from the season). Even if the choice weren't obvious — even if we weren't about to spend almost a month waiting for Nick to make a choice between two women — we would still be wondering what we're doing here. Because frankly, this season of The Bachelor has been terrible, and it's all Nick's fault.

Vulture's Bachelor recapper, Ali Barthwell, put it best in her recap of the previous episode: Nick does not respect "the sanctity of The Bachelor." That's an absurd phrase, sure, but basically it just means he has no interest in the pattern or format of the show:

Every season is basically the same. Every episode is basically the same. The contestants sign up for that. They expect to be dismissed while wearing a cocktail dress in front of their peers, then hop into a black SUV and never be seen again. Nick seems to think that it's more honorable and more respectful to completely piss on the accepted norms and rules of the situation. If you expect to be dismissed with little to no ceremony, but suddenly must endure a full breakup conversation with someone who is completely incapable of expressing his thoughts clearly and concisely, that is insulting and hellish. This isn't nicer. ... he's completely ignoring how this works and how the ladytestants might not want any part of whatever the hell he's doing. He's being completely selfish while acting as if he's selfless and accommodating. He's being the goddamn worst.

Here's a mind-boggling statistic for you: We're in week eight of this season, and we haven't had a traditional, end-of-episode, rose ceremony elimination since the season premiere. Episode two: Nick sent Liz Spanos home on a group date, and then the episode ended in a cliffhanger. Episode three: No rose ceremony, held to episode four. That episode also ended in a cliffhanger, as did episode five.

The sixth featured six eliminations, culling the number of remaining women in half, but none took place in traditional fashion. And last week, Nick eliminated two women outside of rose ceremonies.

Think about that for a second: Only one episode of this entire season of The Bachelor has hewed to the traditional format of The Bachelor. What is a reality competition without consistency? Unfortunately, the answer this season has provided us is simple: It's cruel.

Quite frankly, we can't wait to see what Nick's dating pool has to say on the Women Tell All special this season, because they have every right to be furious.

We had hope for Nick this season, particularly in his come-from-behind redemption story. The guy who had been rejected three times on iterations of this show had experience on TV and would know what he wanted of his contestants. Instead, Nick has time and time again proven himself to be a drama queen who doesn't know what he wants and isn't really taking the women's feelings into consideration. As Barthwell said in her recap, his form of elimination "isn't nicer" — no matter what he thinks.

Nick is basically a lame duck Bachelor. He will pick either Raven or Vanessa — probably the latter — and may or may not make a relationship work. Meanwhile, with Rachel, we have a groundbreaking, fresh, exciting Bachelorette waiting in the wings for her season to start. (We just have to wait for her to be eliminated from this season first.)

This 21st season of The Bachelor has been an unequivocal failure. It lacks suspense (we know one of the four women doesn't make it!), romance (Nick's chemistry with each is lacking) and fun (every elimination has been a downer). It has been a tremendously frustrating season to watch, and it's not over yet. Truly, Rachel's Bachelorette season is all that keeps us invested.