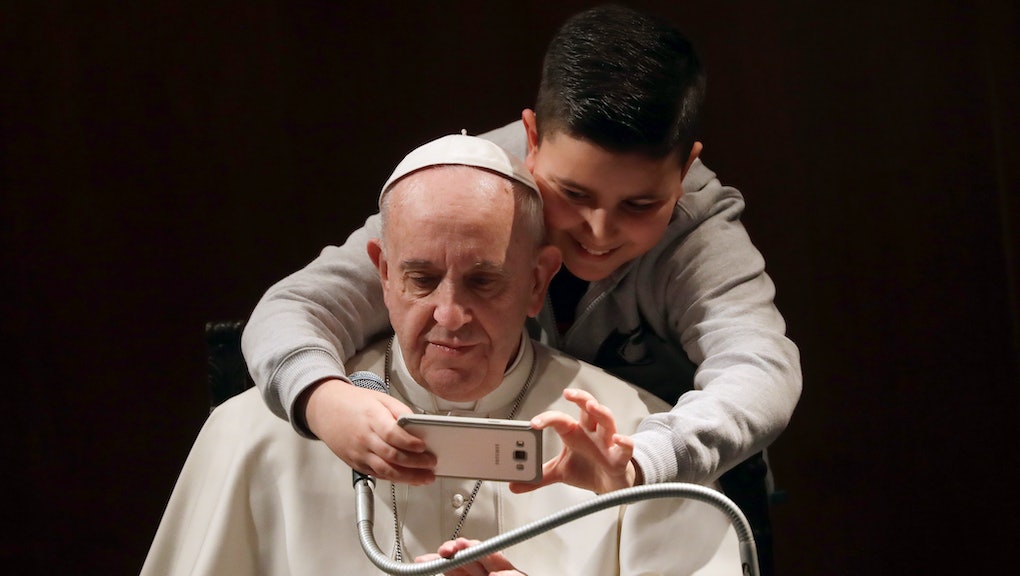 Pope Francis: "Texting during meals is the start of war"

The man widely known as the "Cool Pope" has made his opinion clear on whether cell phones belong at the dinner table.

On Friday, Pope Francis gave a speech at Roma Tre University, a university in Rome, and advised young people that phones are the enemy of dinnertime conversation.

“When we’re at the table, when we are speaking to others on our telephones, it’s the start of war because there is no dialogue,” he said, the Telegraph reported.

The pontiff has condemned using technology at the dinner table before. In 2015, the pope delivered a similar message during an address at St. Peter's Square in Vatican City, the Los Angeles Times reported.

"A family that almost never eats together, or that never speaks at the table but looks at the television or the smartphone, is hardly a family," he said in 2015. "When children at the table are attached to the computer or the phone and don’t listen to each other, this is not a family, this is a pensioner."

By calling families who use screens at dinner "pensioners," the pope is trying to say that there's no bond or togetherness. If you've got your eyes glued to a screen, you're not making or creating bonds with the people joining you at the table. If you're ignoring your dining mates, you might as well be eating alone in a cafeteria.

Texting between bites is bad for your health

The pope is onto something: Reviewing the latest @RealDonaldTrump tweets can probably wait until the dinner plates have been cleared. Having a conversation during dinnertime holds important benefits, whether you have a family or you're dining with friends.

Scrolling through Instagram while you scarf down lunch? Not a good idea. Studies suggest that distracting yourself with technology while you eat can lead to overeating, Greatist noted. If you're focused on double-tapping pics instead of how delicious your meal is, you'll feel less full.

And using your hands to switch between your phone and your fork? Pretty gross. Studies have found that tech devices are more bacteria-ridden than public toilet seats. Think about that next time you're simultaneously eating and tweeting.