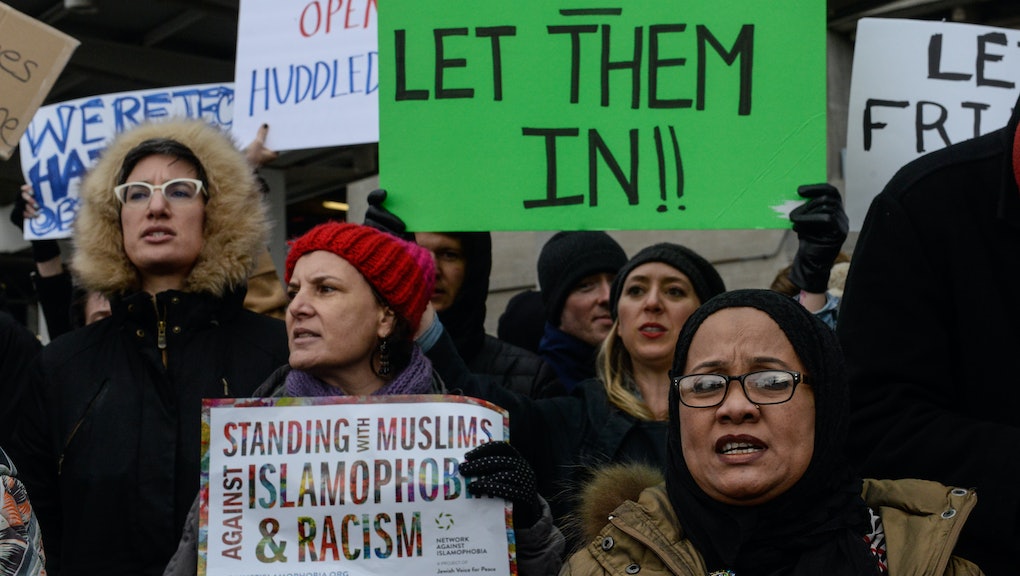 British Muslim teacher was denied entry to the US: "It made me feel like a criminal."

On Feb. 16, a 25-year-old British Muslim teacher from Wales was denied entry to New York City before the wheels of the plane even left ground, Time reported.

Juhel Miah was in Reykjavik, Iceland, with fellow teachers and schoolchildren for a class trip. When the group checked in at the departure gate, Miah was told he was selected for a "random security check" and taken into another room for a screening.

"She took me to the room, made me stand on a stool, take my shoes off, jacket off, checked under my foot, got a swab to brush over my hand and bag, my clothing and school hoodie," Miah told WalesOnline. "They gave me the all clear and then I went. The search was about five minutes at least. There were five or six people in the room, two searched me."

Miah was cleared to board the flight, but then security officials removed him from the plane. His luggage was taken from him and he was sent to a "horrendous hotel" until school officials booked a flight for him back to the United Kingdom. For Miah, the whole experience — which he had to endure in front of his colleagues and students – made him feel like a criminal.

"Everyone was looking at me," Miah said, according to WalesOnline. "As I was getting my luggage the teachers and kids were confused. I couldn't believe this was happening. All the plane was quiet. I was being escorted out. It made me feel like a criminal. I couldn't speak, I was lost for words."

There has been no clear explanation as to why Miah was removed from the plane and denied entry to the U.S. On Feb. 10, a federal appeals court upheld a decision to suspend Trump's travel ban, which restricted entry to all refugees, immigrants and visa holders from seven majority-Muslim countries: Iran, Iraq, Libya, Yemen, Somalia, Sudan and Syria.

Miah, from Swansea, Wales, does not belong to any of the seven banned countries. He only has British citizenship — and U.S. officials even assured the U.K. that their passport holders will not be affected by the ban.

"We have confirmed with the U.S. government that British passport holders (regardless of country of birth or whether they hold another passport/nationality) aren't affected by the executive order," U.K. government advice reads.

"The local authority understands that Mr. Miah was refused permission by the United States authorities to fly to New York, despite being issued with a valid visa for travel," the spokesman told the Guardian. "Mr. Miah is a popular and respected teacher at Llangatwg comprehensive school."

A spokesman for the council said they can't comprehend as to why the Welsh Muslim would be denied entry other than being subjected to "an unjustified act of discrimination."

"No satisfactory reason has been provided for refusing entry to the United States – either at the airport in Iceland or subsequently at the U.S. embassy in Reykjavik," the spokesman added. "Mr. Miah attempted to visit the embassy but was denied access to the building. Understandably he feels belittled and upset at what appears to be an unjustified act of discrimination."