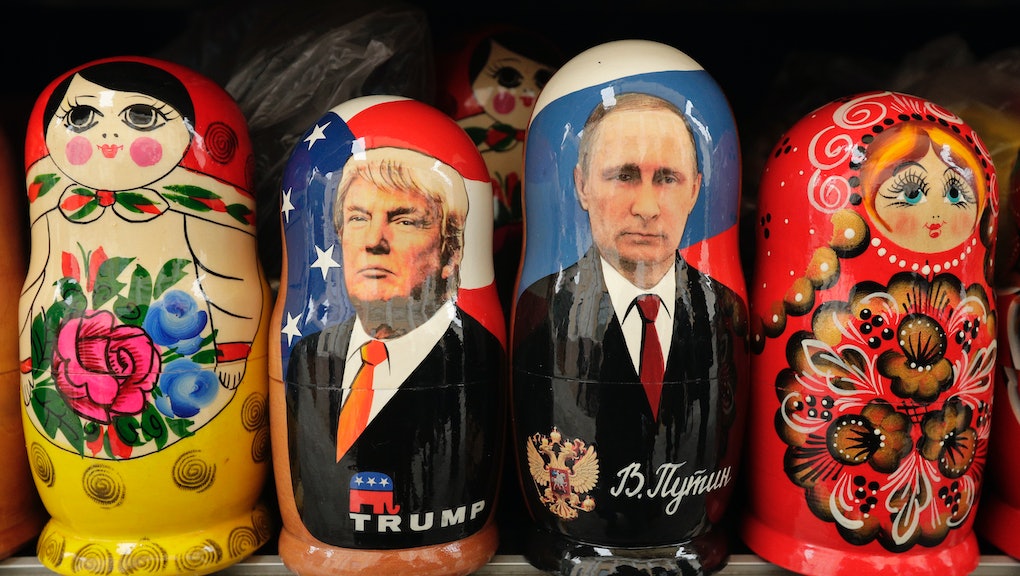 Trump's had ties to Russia for decades — here are the highlights

President Donald Trump is fond of saying he has "nothing to do with Russia." Trump said it during a news conference on July 27; he tweeted it Jan. 11; and he repeated the claim at his most recent press conference on Thursday.

Contrary to that oft-repeated sentence, Trump has had documented ties to Russia for decades.

Trump has visited Russia many times dating back to at least 1987, when he visited the country at the invitation of Soviet ambassador Yuri Dubinin. In 1996, Trump said he wasn't sure he'd ever been "as impressed with the potential of a city as I have been with Moscow, according to the New York Times.

A 1997 profile in the New Yorker said Trump engaged in discussions with former Russian presidential candidate Aleksandr Ivanovich Lebed, who thought his "domestic political prospects could be enhanced if voters back home got the message that Western capitalists felt comfortable with him."

We are actually looking at something in Moscow right now, and it would be skyscrapers and hotels, not casinos. Only quality stuff. But thank you for defending me. I’ll soon be going again to Moscow. We’re looking at the Moskva Hotel. We’re also looking at the Rossiya. That’s a very big project; I think it’s the largest hotel in the world. And we’re working with the local government, the mayor of Moscow and the mayor’s people. So far, they’ve been very responsive.

Trump made an eyebrow-raising boast that during one of his visits to Moscow, "almost all of the oligarchs were in the room."

The Trump children have also been connected to Russia. The New York Times reported that in 2006, "two of Mr. Trump’s children, Donald Jr. and Ivanka, stayed at the historic Hotel National Moscow opposite the Kremlin, connecting with potential partners over the course of several days." Donald Trump Jr. later explained the Trump Organization's efforts to expand into emerging markets: "Russians make up a pretty disproportionate cross-section of a lot of our assets."

In 2011, according to the New York Times, Trump settled a lawsuit that alleged "Trump SoHo was developed with the undisclosed involvement of convicted felons and financing from questionable sources in Russia and Kazakhstan."

A history of praising Putin

Trump's praise of Russian President Vladimir Putin is not a recent phenomenon, either.

In 2007, he praised Putin during an appearance on Larry King Live:

Look at Putin — what he's doing with Russia — I mean, you know, what's going on over there. I mean this guy has done — whether you like him or don't like him — he's doing a great job.

In 2013, Trump visited Moscow for the Miss Universe pageant, which he owned from 1996 to 2015. While in Moscow, he met with Herman Gref, CEO of Russia's largest state-run bank. He also (in)famously tweeted, "Do you think Putin will be going to The Miss Universe Pageant in November in Moscow — if so, will he become my new best friend?"

Putin didn't show up to the event, but Trump did confirm he had been invited. He also tweeted, "TRUMP TOWER-MOSCOW is next."

The rest of the Trump-and-Russia show ...

Of course, there's also the recent history of Trump and Putin's pas de deux: the campaign advisors; former national security adviser Michael Flynn; the hacking of the Democratic National Committee; the multiple positive statements about Putin; and much, much more.

Without access to his tax returns, we'll never know if Trump is indebted to Russian individuals or financial institutions. We may never know if Russia has compromising information on the U.S. president.

One thing is for sure, though: Trump's seeming obsession with Moscow is neither recent nor unrequited.