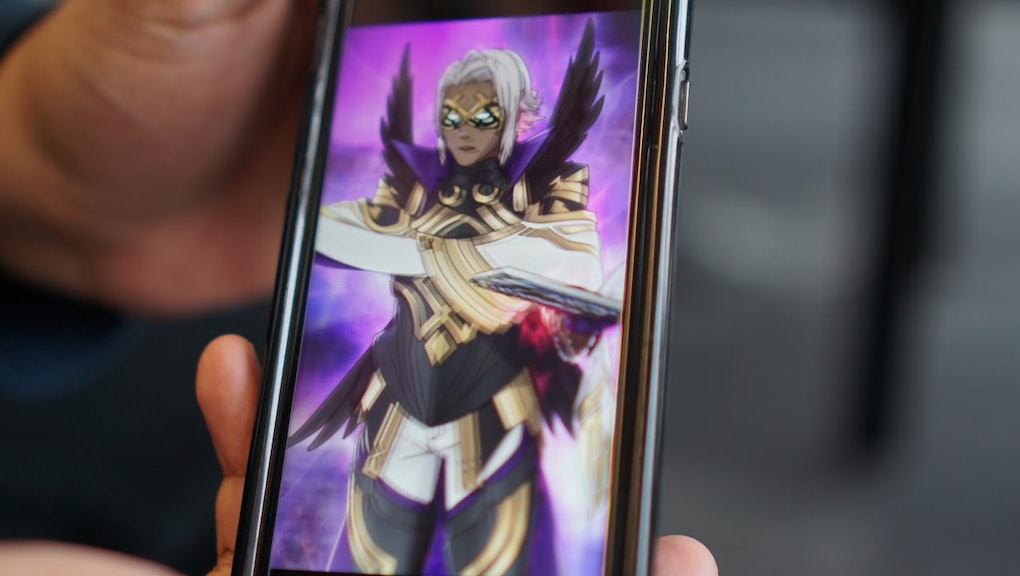 Well folks, we're finally here. The last chapter of Fire Emblem Heroes. It's been a long road and, although we've wound our way through the World of Mystery (twice, in fact), the World of Conquest, the World of Binding and the World of Awakening, now we're taking the Order of Heroes directly to Embla to deal with Princess Veronica once and for all.

These missions are tough and cap out at about level 25. So make sure you're leveling up your heroes, and make sure the heroes you're leveling up are ranked high enough to be helpful in the battles to come. Once you've finalized your team and trained them up in the Training Tower, we'll set off for Embla.

What you'll find in this guide:

Move a blue attacker over to the right in order to harry both Camus (the lance user with the tasteful cravat) and the red cavalier. Also move a sword user to the left to hold Michalis, the red dragon rider.

The enemies will consolidate on the righthand side of the map. So use the forest to avoid getting swamped by a ton of counters from the mounted units. Move your sword user up to take out Michalis while the cavalry units deal with navigating around the forest.

It's worth noting that Camus also has an Area of Effect special attack, but he probably won't engage in enough combats with you to use it if you're smart about the weapon triangle. This chapter starts off simply enough, but rest assured it won't stay that way for long.

You're fighting Zephiel in his Binding Blade incarnation in this level. Fun fact about that: you actually rescue a teenaged Prince Zephiel in Blazing Blade, and in spite of that he still grows up to be a dink who's obsessed with ruling the world. The irony of this was of course lost on North American Fire Emblem fans because Binding Blade was never localized in America.

Anyway, onto the battle itself. Move an archer to the south in order to keep an eye on Narcian the Wyvern rider. Keep two fighters in range of Zephiel because of his ability, Wary Fighter 2. This prevents you and him from making follow up attacks if he starts combat with more than 70% of his max health. Plus, he'll give the two knights on either side of him +4 defense and resistance. Oof. "Take him out ASAP" is the gist.

Although Zephiel and the knights will be a royal pain on higher difficulties, it's not too hard to move them into disadvantageous weapon triangle match ups and grind through their massive HP pools since they've only got the one healer.

Narcian from above has an Emerald Ax. It's the same as the Sapphire Lance or Ruby Sword we saw in chapter six on Hinata: +20% damage when you've got weapon triangle advantage, -20% when he's at a disadvantage. That said, he really shouldn't even reach your other units as long as you blast him out of the sky with an archer or red magic user.

Just take advantage of the knights' limited movement to run circles around them if you're having issues.

The enemies in this level will start moving toward your team as soon as they have the chance. So try to provide them as many targets as possible if you think you can handle the assault. Create a front line of melee attackers to avoid getting hit with multiple melee attacks.

Ursula (the mounted magic user) can buff her fellow cavalry users and her Blárwolf magic is strong against your cavalry units, but once she closes the gap with you to attack, she's a sitting duck for your strongest attacker. It's not ideal, but you might need to sacrifice a character to draw her in range. Thankfully, unlike main series Fire Emblem games, there's no permadeath in Fire Emblem Heroes.

Okay, so the last two parts of chapter nine hinge on there being a hugely powerful magic user who wrecks your day. It's imperative you not engage with them until you're able to kill them in one fell swoop, because you won't last long in sustained combat.

If you need to, you should definitely use your Light's Blessing items you got either from redeeming the points from linking your Nintendo account or through completing quests. They'll fully heal all your characters (even if they were reduced to 0 HP) and trigger all your specials when you use them, so it's great for when you need a little boost to put you over the edge in an encounter that's gotten away from you.

In this mission, the Masked Man will royally mess you up. So you've got to let him come to you. Move a ranged attacker to that bottom salient to draw fire from the archer, which will trigger everyone else moving up. If you can kill him, great. That means you'll probably get the staff user sitting behind him since the AI always prioritizes attacking. If not, it's more to draw the Masked Man out.

Use the Danger Area button at the bottom left of your screen to see where you can be attacked from and avoid those for as long as you can. The Masked Man's magic, Valaskjálf, will always give him the first strike when he's under 50% HP. The knight will continually pull him back. So it'll take a little while to draw him out. Since he doesn't have a melee counter, use two melee characters to go for the throat. He shouldn't get more than one attack off if you're careful about avoiding his threatened squares.

With the Masked Man dispatched, he tells you that Veronica is on her way to Askr to destroy your summoning ruins and that you'd better go stop her.

It's time for the final showdown. This chapter, everybody. This chapter! Stay out of Veronica's range for as long as you can since she'll de-buff all the characters around the one she hits with an attack AND deal 7 damage after the fact. Oh, and she also regains 10 HP per round. Woof.

Spread your team out enough so that attacking her doesn't cripple your whole party, but be prepared to lose people. If you can, block her with the columns and focus on taking out some of her support first. This is doubly helpful because Veronica having fewer allies means it's easier to maneuver her into position to take her out in one turn, and you'll have to since she'll rip you to shreds otherwise.

However, once you take out Veronica, Xander and the rest of the crew won't put up too much fight. Assuming you're not too weak, it won't be a huge burden to mop them up. Use a light's blessing if you have to!

Once you've defeated Veronica, she gets upset that Askr has everything and then you get some non-resolution! But you'll also unlock quests for the next difficulty level, and you'll get another orb per level finished. So there's still plenty of game left now that you've successfully defended Askr's summoning ruins, especially if there's a certain hero (like Ephraim, perhaps) that you're dying to pull! Hop to it, hero!