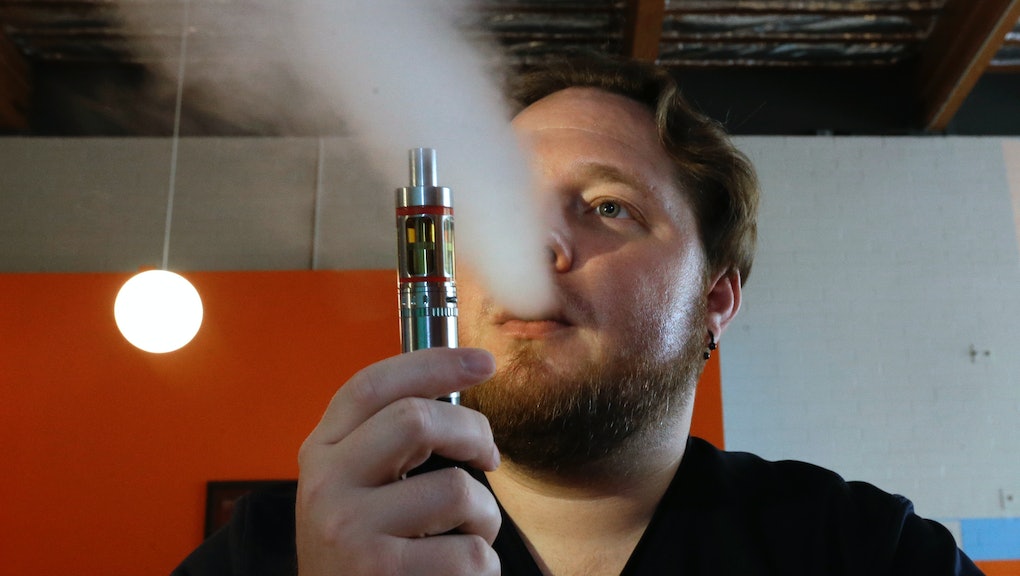 Vaporizers and e-cigs may seem like dorky alternatives to old-fashioned cigarettes, but here's something undeniably cool about them: They expose users to far fewer carcinogens.

This month, Cancer Research U.K. published one of the only long-term studies to date comparing vaping to smoking cigarettes, and their conclusions certainly seem like good news for anyone who has made or is thinking of making the switch from smoke to vapor.

According to the analysis of saliva and urine from 181 participants with varying nicotine habits over a time period of at least six months, e-cigs can drastically cut the amount of toxins absorbed by the body — while delivering roughly the same amount of nicotine.

The most impressive finding was that a vape user's NNAL levels are 97.5% lower than that of a smoker. NNAL is a byproduct of NNK, one of a group of chemicals called tobacco-specific n-nitrosamines, which are known to play a role in the creation of cancerous tumors.

And that's not all: E-cigarette users also enjoy "significantly lower metabolite levels" for volatile organic compounds, including the toxins acrolein, acrylamide, acrylonitrile, 1,3-butadiene and ethylene oxide, each of which has been linked to some form of cancer.

"The take-home message for smokers and e-cigarette users," Lion Shahab, one of the study's authors, told Digital Trends, "is that using e-cigarettes long-term is likely to carry substantial health benefits, certainly in relation to cancer risk, compared with continued smoking. E-cigarettes are certainly safer than combustible cigarettes.”

Of course, there are a few caveats: The benefits of vaping were only evident in people who fully committed to e-cigarettes. Those whose nicotine habit included both e-cigs and regular cigarettes "had largely similar levels of TSNA and VOC metabolites" to purely conventional smokers.

It's also worth noting that cancer is hardly the lone disease associated with smoking. We've yet to learn if vaping can cut the risk of cardiovascular and respiratory problems or strokes as compared with cigarettes. The FDA didn't begin regulating e-cigs until late 2016 and still hasn't approved them as a way to quit smoking; plenty of health questions remain.

Even so, the study is a heartening first step into a field of research that is only now taking shape.