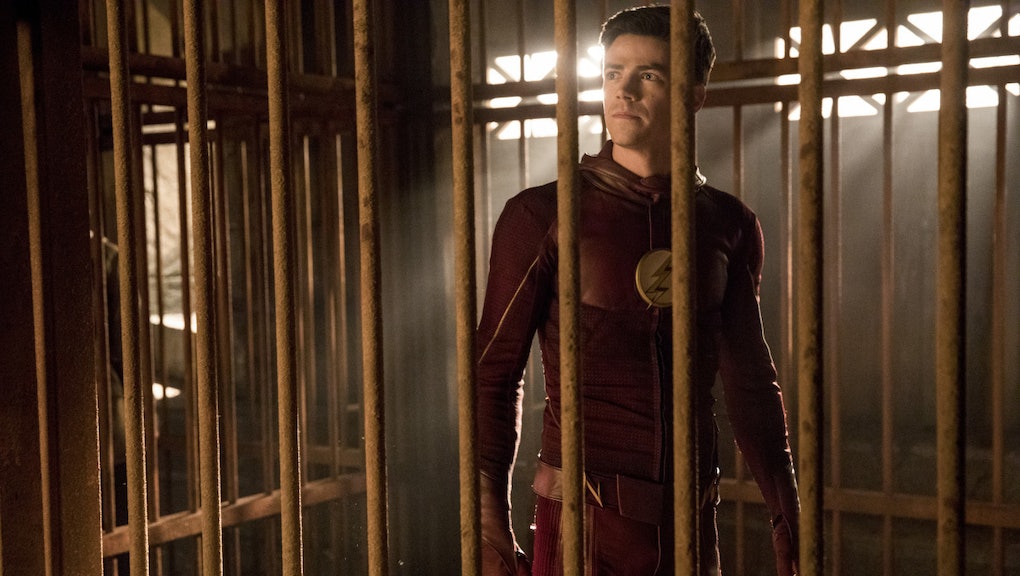 Oh. My. Grodd. After taking a week off, The Flash is back with one of its most ambitious episodes ever. Episode 13, “Attack on Gorilla City,” sees the return of telepathic super gorilla Grodd, who it turns out, isn’t too happy about being banished to an all-gorilla city on Earth-2. Grodd’s got a plan for revenge and it involves killing — or at least trying to kill — Barry Allen. Meanwhile, Barry just wants to stop the future from happening — but that’s harder than it seems.

Episode 12 ended with Jessie Quick coming to Earth-1 to tell the gang that her father, Earth-2 Harrison Wells a.k.a. Harry, has been taken by the gorillas in Gorilla City. Obviously, Earth-2 has a colony of sentient super gorillas who live deep in the African forest. It also happens to be where Barry banished Grodd after their last battle.

Oh wait, but wasn’t there a future headline about gorillas? One of the headlines Barry and Cisco saw in the future said the city was still recovering from a gorilla attack. This must be related. Barry theorizes that if they go to Earth-2 and stop the attack before it happens they’ll get one step closer to changing the future and saving Iris.

The team decides that Barry, Cisco and Caitlyn will go rescue Harry and stop the gorilla attack. They’re later joined by Julian and the four of them set off for the jungle of Earth-2. Unfortunately they’re shot with tranquilizer darts shortly after jumping over.

Gorilla City is a massive, ancient citadel made from stone and includes a giant coliseum-like gladiator arena. The gang wake up in a cell where they’re being held hostage by Grodd. Speaking through Harry, Grodd explains that Solovar, the king of the gorillas, wants to attack Central City. Grodd says he lured Barry there to fight Solovar to the death, so that he, Grodd, could become king and stop the gorillas from attacking.

Having no choice, Barry agrees to fight Solovar. The two engage in a CGI-heavy battle in the coliseum and Solovar at first seems to be an even match for Barry. Barry inevitably gets the upper hand, quite literally, when he knocks Solovar out with a phase punch. Barry refuses to kill Solovar, instead he talks to the thousands of gorillas watching about showing mercy.

Grodd's plan works and he becomes the gorilla king after Solovar shows weakness. He also reveals that it was a trick. Grodd wanted to become king so that he could attack Central City. Solovar never wanted to and now Grodd is going to force Cisco to open a breach back to Earth-1.

Barry and the gang realize the only way out of this is for someone to die, so they hatch a plan to outsmart Grodd. They call Grodd down to the cages where Barry is lying still and completely cold. They tell Grodd that Barry is dead so Grodd discards his body on a pile of bones just outside the cages. Once Grodd leaves the room, Barry vibrates himself back to normal body temperature. Caitlyn had used her ice powers to make it look like Barry died! Barry lets them all out, and after a brief jungle chase, everybody (including Harry) vibes back to Earth-1.

The gang celebrates a successful mission, Jessie and Harry are reunited and Barry gets to sleep well considering they actually succeeded in changing one part of the future… right? Not so fast. Grodd’s got yet another trick up his sleeve. The final scene of the episode reveals that Grodd has Gypsy (who can vibe between worlds) and an army of super gorillas at the ready. An attack on Central City is happening whether Barry likes it or not. The future is still coming.