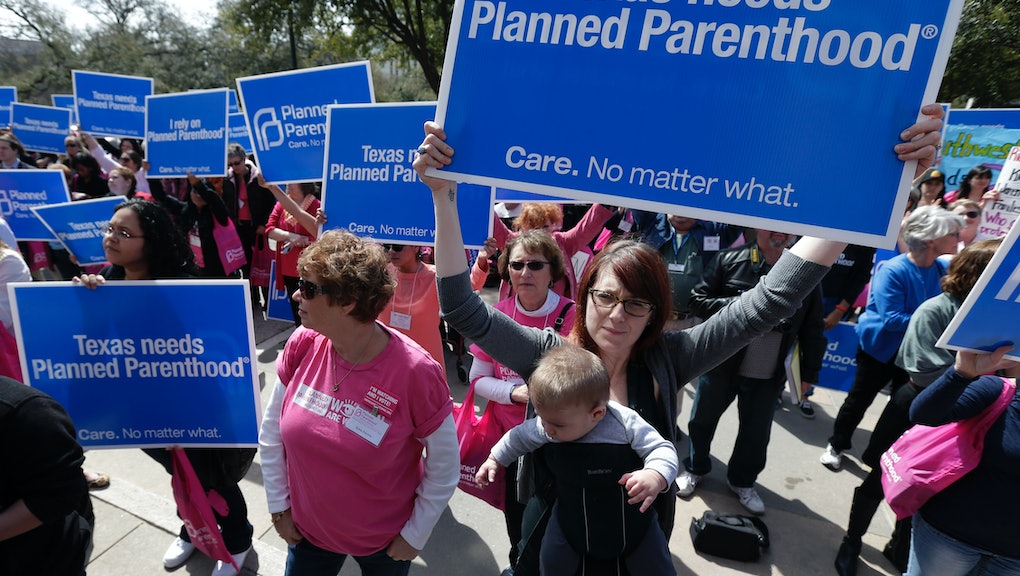 On Tuesday, a federal judge blocked Texas from withholding Medicaid funds from Planned Parenthood, ruling that the state had not provided sufficient evidence in support of its claim that the health care provider traffics in baby parts.

According to the Associated Press, U.S. District Court Judge Sam Sparks of Austin, Texas, reasoned that, in continuing to lean on those doctored 2015 sting videos as proof that Planned Parenthood is operating nefariously and illegally, Texas failed to offer credible evidence that the health care provider had actually done anything wrong.

"A secretly recorded video, fake names, a grand jury indictment, congressional investigations — these are the building blocks of a best-selling novel rather than a case concerning the interplay of federal and state authority through the Medicaid program," Sparks wrote, according to the AP. "Yet, rather than a villain plotting to take over the world, the subject of this case is the State of Texas's efforts to expel a group of health care providers from a social health care program for families and individuals with limited resources."

Defunding Planned Parenthood in Texas would have affected access to routine health services — cancer and STI screenings, breast exams, contraception — for roughly 11,000 low-income residents of the Lone Star State. According to the AP, over 4 million Texans are on Medicaid, and while only a small fraction of those are Planned Parenthood patients, Sparks ruled that it would be difficult for those who do go to Planned Parenthood to find replacement care.

In late December, over a year after the state issued its original defund decision, Texas health officials made their final move to cut the roughly $3.1 million in Medicaid money Planned Parenthood had previously received. At the last minute, the health care provider asked the courts to intervene.

According to the Huffington Post, Texas would have blocked around $4 million of federal funding for Planned Parenthood, if not for Sparks' injunction. His ruling reflects decisions in a number of other states — like Louisiana, Arkansas, Mississippi and Kansas — that have attempted to use the heavily edited sting videos as grounds to cut Medicaid funding. When the videos, which appeared to show the health care provider illegally profiting off the sale of fetal tissue, were brought before a grand jury, it was the filmmakers who wound up indicted, rather than Planned Parenthood. According to the AP, the videos fueled investigations in 13 states, all of which came up with nothing.

Against all odds, anti-abortion lawmakers in Texas are sticking with their story. The state's attorney general, Ken Paxton, will file an appeal.

"No taxpayer in Texas should have to subsidize this repugnant and illegal conduct," Paxton said, according to the AP. "We should never lose sight of the fact that, as long as abortion is legal in the United States, the potential for these types of horrors will continue."

The funny thing is that, thanks to the Hyde Amendment, taxpayer dollars don't subsidize abortion anyway. But that hasn't stopped Congressional Republicans from moving to defund Planned Parenthood at a federal level, likely with disastrous results.