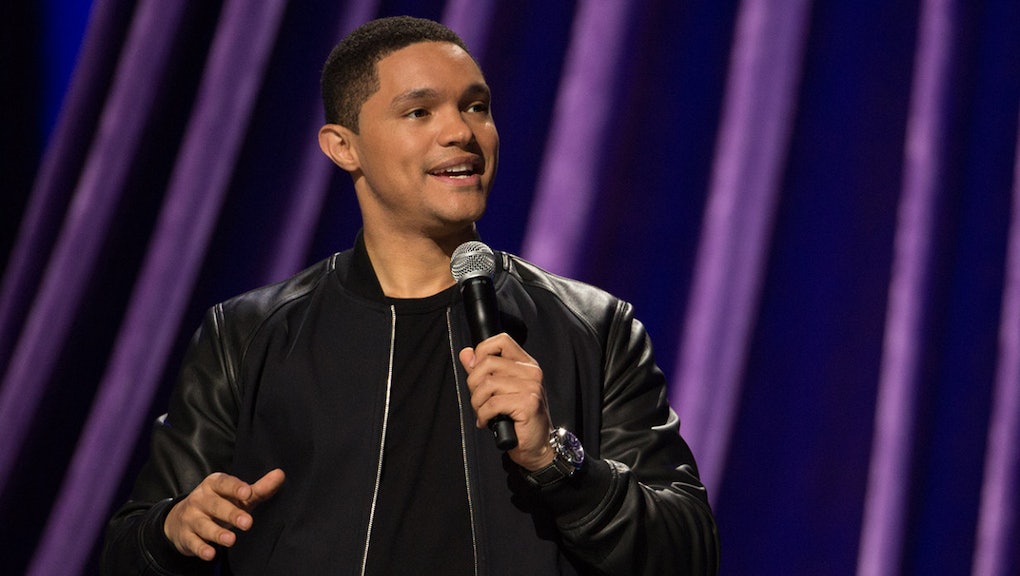 Netflix's 'Afraid of the Dark' Review: How Trevor Noah brings a global perspective to stand-up

While comedian Trevor Noah is best known for his work on The Daily Show, he wouldn't have been selected as the successor to Jon Stewart without his stand-up work. So it's refreshing to see Noah in his Netflix stand-up special, Afraid of the Dark, outside of The Daily Show and its non-stop coverage of Donald Trump. However, just because the special rarely touches on Trump — in part because it was recorded prior to the results of the election — doesn't mean it won't get political.

Noah brings a global perspective to stand-up, and with it, a hilarious take on the idiosyncrasies of people in other countries and cultures. For instance, with New Yorkers, he remarks on just how fearless most people are with traffic signals. If the crosswalk signals green, even if — as Noah explains — a truck is barreling down the road, people will cross the street. Though he joked the use of traffic signals in Africa hasn't caught up to speed.

But even when Noah isn't digging at Trump by name, he does touch on the divisiveness of Trump's rhetoric — in other words, people wanting to "take their country back" from immigrants — on a global scale. Noah mentions Brexit, a movement less economically motivated and more anti-immigrant. He does, however, find some Americans' anti-immigrant stances a tad ironic.

"Everyone is an immigrant from somewhere," Noah says. "Whenever I see people have those conversations in America about 'these damn immigrants' … I always wonder what Native Americans must be thinking. When they’re listening to the words that are being said, you know?"

Several of Noah's jokes in Afraid of the Dark are predicated around his many accents (seriously, you'll lose count from how many he dishes out). It's funny physical humor, to be sure — like when he explains that thick Scottish accents were built over time from centuries of Scots holding in their puke after a long night of drinking — but they also hold a powerful underlying message.

"I love accents because I’m always impressed by how much power they have over us, over our minds," Noah says. "When someone speaks a certain way, it changes how we feel about that person, for good and for bad. We do it all the time."

To that end, he creates a faux narrative of the first time Barack Obama met former South African President Nelson Mandela. Obama was a junior senator at the time, and Noah envisions a scenario where America's future POTUS obtained his smooth, slow speaking style thanks to an impromptu lesson from Mandela, who himself had a suave speaking style. "Accents have connotations we cannot deny," Noah adds.

Ultimately, Noah's Afraid of the Dark wants to encourage its viewers to think about different, global perspectives and how they can shape our individual realities. A major factor in changing that — and one Noah has achieved throughout his career — is by traveling the world.

"If there’s one thing you won’t waste your money on, it’s traveling," he says. "Travel the world. See another place. Discover a different point of view. Traveling is the antidote to ignorance, that’s so true. It changes your mind, your perspective, how you believe, what you believe."

Noah's message in Afraid of the Dark — one of open-mindedness and stepping out of your comfort zone — is both refreshing and evergreen. At a time when the news cycle and Noah's own late-night show can't shy away from the daily terrors of the Trump administration, it makes his Netflix special a necessary and hilarious respite.

Trevor Noah's Afraid of the Dark is currently streaming on Netflix.

Mic has ongoing Netflix coverage. For more on this topic, visit our main Netflix hub here.