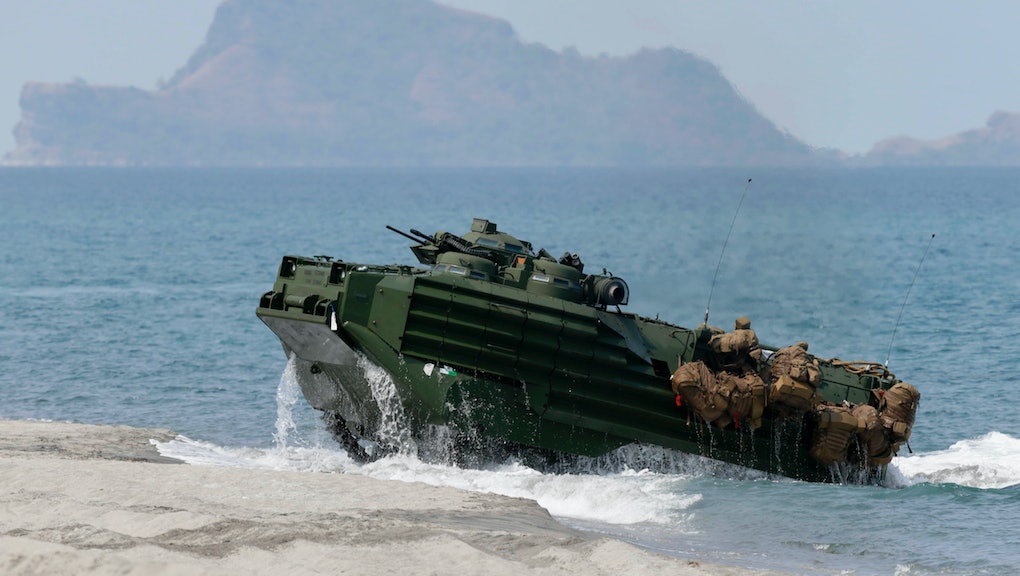 South China Sea dispute: How China is testing the waters of a Trump presidency

Chinese expansionism in the region is not new, but the country's increasing ability to project power into the South China Sea presents a new test for President Donald Trump.

According to the United Nations Convention on the Law of the Sea, a coastal state's maritime boundary extends 12 nautical miles from its coastline — but its exclusive economic rights, including the natural resources that may lie under the seabed, extend 200 nautical miles.

China claims a boundary — the so-called "nine-dash line" — that extends far beyond 200 nautical miles from its shore. These claims are contested by the Philippines, Brunei, Malaysia, Vietnam, Taiwan and Indonesia.

Because the country's claims are so patently ridiculous, China, in an attempt to put its position on firmer ground, is building firmer ground.

China has constructed seven islands where none previously existed. It has also constructed on reefs. Some of these islands contain 10,000-foot runways, reinforced hangars and deep-water harbors — and have clear military uses.

Additionally, China claims its maritime and economic boundaries extend 12/200 nautical miles from these newly built coastlines. This gives them greater control of an area through which 25% of the world's shipping travels, and may now allow them control over much of Southeast Asia airspace.

Barack Obama and freedom of navigation

The construction of these islands presented a conundrum for former President Barack Obama's administration. It was not willing to fire on the Chinese military for fear of starting a war. And military conflict would be an even worse option for the weaker states whose sovereignty is being violated.

Instead, Obama's administration pursued a policy of freedom of navigation, as Obama said "the United States will continue to sail, fly and operate anywhere that international law allows."

To show the United States did not recognize China's claims, Obama conducted naval operations close to these islands and asserted that they were international waters.

Trump and his team talk extremely tough against China and the South China Sea. Chief strategist Steve Bannon once said there was "no doubt" the United States and China would fight a war in the South China Sea in the next 10 years.

The trouble is there are multiple areas of conflict and potential cooperation between the two countries outside of the South China Sea, including trade, North Korea, THAAD deployment and Taiwan.

What can Trump do?

Trump has limited options in the South China Sea. The United States has no territorial claims of its own, so firing on a Chinese ship or installation in international waters would be considered an act of war.

If China fired on a Filipino ship, Trump could justify the use of force in as part of the 1951 treaty between the United States and the Philippines, but that would likely escalate far beyond the Philippines' willingness.

The Trans-Pacific Partnership would have been the first step toward bringing together many of the counterclaimants in the South China Sea, but Trump has already eliminated that possibility.

China showed no willingness to relinquish its claims with Obama, and with Trump's seemingly kamikaze-like pursuit of a trade war with China, he's giving Beijing little reason to negotiate with him. Perhaps his best option is to pursue an "Obama+" policy: continued, albeit more frequent and overt, "freedom of navigation" missions and aerial surveillance.

Ultimately, it's likely China will continue to gain the upper hand in the South China Sea. This could well be a test the Trump administration has already failed.