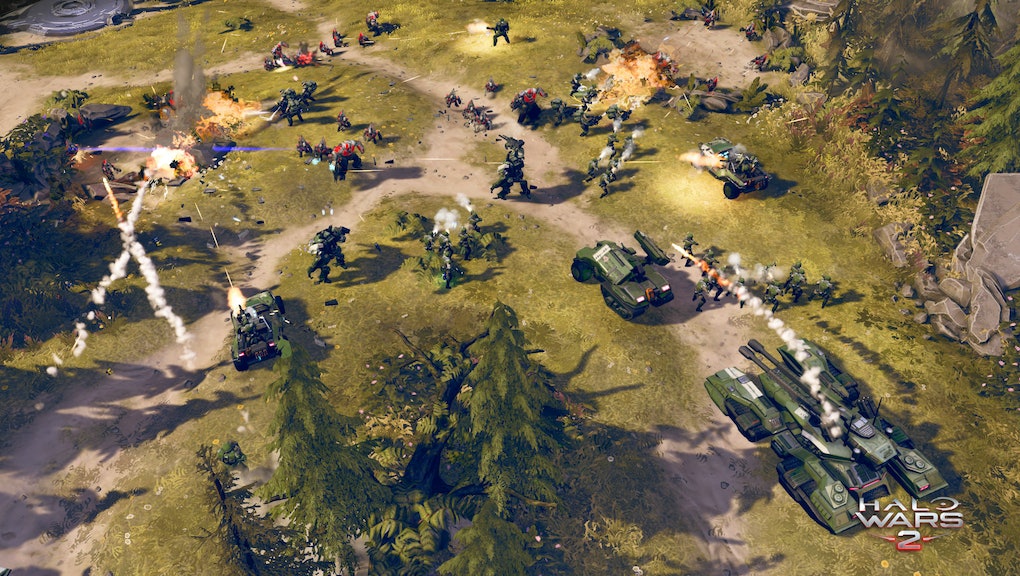 With the recent cancellation of Scalebound, the Xbox One's 2017 exclusive lineup is looking pretty slim. One of the remaining games on the list is Halo Wars 2, the somewhat unexpected sequel to a 2009 real-time strategy spinoff of Microsoft's flagship shooter series.

The first game found a way to make that genre work on a controller with streamlined mechanics. But how does Halo Wars 2 hold up? Let's find out.

The first thing anyone wants to know about a console RTS is how the controls work. According to Luke Plunkett's Kotaku review, they work fairly well.

Here, within the confines of this game's maps and demands, the Xbox One's controller works almost flawlessly. And I do mean that; it's a wonder to realize, not even five minutes after the game's tutorial, that you're sweeping the camera around, group selecting units and snapping back to bases and other armies with the flick of a button, just as you would if you had a mouse and keyboard.

"Within the confines of the game's maps and demands" is operative here, as Plunkett later criticizes the game's campaign missions for dull, limiting design.

There's a lot of real-time in Halo Wars 2, but not much strategy. The most taxing things you'll be asked to contemplate are which order you'll construct buildings and when you'll call down support powers (like Orbital Drop Shock Troopers squads, which you can see dropping in below, and missile attacks), otherwise progression in the game usually consists of building a bunch of units then throwing them at the enemy.

IGN's Dan Stapleton, on the other hand, found that the controls can occasionally be problematic when the game asks too much of them.

If, for instance, you're trying to get your Warthogs and Scorpion tanks out of range of the anti-vehicle gun of a Hunter before they can inflict real damage and move up your anti-infantry Hellbringer flamethrower units to counter, it's tricky to pull off in the heat of battle. You have to select all units on-screen using the right bumper, then use the right trigger to cycle through the available unit types — which can be a lot in a large army — and then you can move that unit type independently. It works, but usually not quickly enough, especially if you have multiple vehicle types to move to safety. Then it might be faster to target and double-tap a unit with the A button to select all of that type, then hold right-trigger and double-tap one of the other types to select both at once. Good luck with that if you're working with air units.

Halo Wars 2 tells a side story that doesn't involve series protagonist Master Chief or his holographic partner Cortana. Instead, it follows the Spirit of Fire, a United Nations Space Command ship that was central to the last game, and its quest to defeat the dangerous Brute named Atriox.

This characterization seems a little thin, I'll admit, but through generous use of pre-rendered cutscenes (whose production quality is phenomenal), Atriox is fleshed out and given a tangible sense of menace and personality that I haven't seen in a Halo game in years. Halo Wars 2, like the first game, takes place to the side of a greater conflict, and the stakes are somewhat removed from the fate-of-the-universe determinations the Master Chief is responsible for. This results in something that feels more like a war movie involving two sides than a sci-fi savior epic, and the story and themes really work in a way that few shooters — even Halo — manage, to say nothing of most real time strategy titles.

However, it isn't perfect. Gies criticizes the story for doing what many Halo games do: not having a real ending.

The problem?  Halo Wars 2 can't quite stick the landing. While Halo Wars 2's story is considerably more coherent than many mainline Halo entries, it adopts one of the series' most obnoxious tendencies in an ending that avoids any meaningful sort of resolution. In mainline Halo games I've almost come to expect it, but here, I was surprised, and annoyed, in equal measure, especially in a game with only 12 missions — not all that many by RTS standards.

Halo Wars 2 has the typical battery of skirmish multiplayer modes that you would expect from an RTS game. The most distinctive multiplayer offering in this game, though, is Blitz Mode.

In Blitz Mode, your army is randomly built from a deck of cards at the beginning of the match. You can, of course, buy new card packs with real money. Luke Plunkett praised the idea but wondered about its viability.

It's a neat idea, but how comfortable are you with buying packs of cards for a real-time strategy game? And then relying on luck dictating which of those cards you could play at any one time? It would seem absurd, if I didn't also know there will be people out there who will actually do it. Even at these prices.

Stapleton expanded on the idea of luck playing too heavily into the Blitz proceedings.

Blitz is fun, but I think that dependence on luck is going to shorten its long-term appeal. And when that luck extends to giving you random new cards, some of which are unique to the six leaders, in upgrade packs that are also for sale in the store, I worry even more. You can't directly buy the power you want, but you can buy another shot at it. Hopefully the matchmaking system is smart enough not to pair people with crazy-powerful cards in their decks against those with more modest decks, but that remains to be seen.

While all of these reviews come away from Halo Wars 2 with generally positive feelings, none of them contain especially glowing praise. It sounds like Halo fans might have some fun with it, but people who aren't invested in Microsoft's epic space saga may want to stay away.