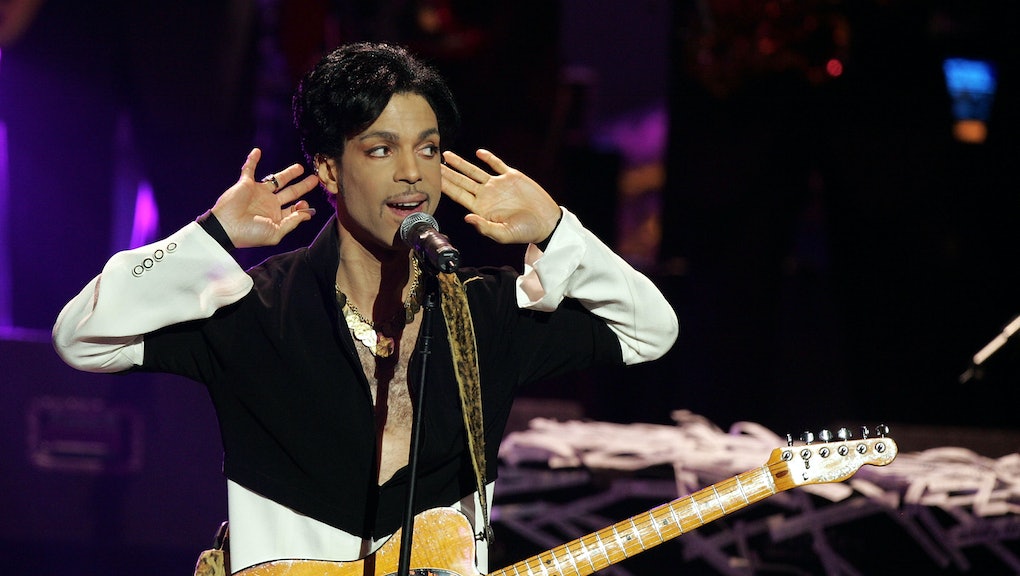 Prince's legacy as a musician and trailblazer can never be matched. He recorded countless hits, toured until his death in April and fought to take back ownership of the music he was passionate about creating. Behind the scenes, he was also a mentor to several musicians and was committed to being a social justice activist.

Prince was also known for sharing his honest opinions, even if you weren't ready to hear them. He left behind many quotables in his songs and in hysterical interviews. Here are 13 of those lyrics and quotes from the late iconic singer that will make you love him even more.

"They wouldn't let me produce myself"

On his first appearance on American Bandstand back in 1979, Dick Clark asked the young, unbothered but super-confident Prince why he turned down a label's offer when he was 15 years old.

He didn't say much during the interview, but was sure to make this declaration. "They wouldn't let me produce myself."

While in a public battle with Warner Bros. record label in 1998, Prince appeared on BET Tonight. Host Tavis Smiley asked Prince how an artist deals with being in a situation where they're being used or "played," by a label. His response above was golden. "I can't be played. A person trying to play me plays themselves."

"I don't sample. It's not Memorex"

In the same interview, Prince reiterated that he is a true musician and not to ever get this fact wrong. "I am a musician. I don't sample. It's not Memorex. I go onstage. My microphone is on," he said.

During an appearance at the Grammys in 2015, Prince brought the Black Lives Matter movement center stage.

"Like books and black lives: Albums still matter," he said.

In the months prior to his death, Prince threw a "rally for peace" benefit concert in Baltimore amid unrest following the death of Freddie Gray.

"There's just as much hunger here at home"

In 1985 Prince was one the artists called to record "We Are the World," a charity single to raise money for poverty throughout Africa. But Prince was not interested and instead recorded his own musings about their campaign on the song "Hello."

"Everybody we're against hungry children/ Our record stands tall/ There's just as much hunger here at home," he sings.

"The sky is the limit on what she can do"

Prince saw the excellence in Beyoncé early on, but as the legend he is, he wanted to know if a much younger Bey really knew her stuff, in the uncredited interview above.

"I was really curious as to how much she knew musically and I was really pleased to find out that she knew a lot about scales, Mixolydian scales and Egyptian styles and different things like that. I was just tryna show her some chords on the piano and help her to respect the fact that if she learns piano a la Aretha Franklin and Ray Charles and things like that, I mean the sky is the limit as to what she can do cause she’s so very talented."

"Love must be the master plan"

On his 1991 slow jam "Diamonds and Pearls" Prince let us know that at the core of his beliefs is love.

This was Prince's response when he was asked what his thoughts were on present-day stars like Justin Bieber and Lady Gaga, while on The View in 2012.

“Different strokes for different folks. I make music so I don't watch it too much.”

"I'm just that way around you"

Barbara Walters is journalism legend, but that didn't stop Prince from being candid with her after she asked him why his personality seemed different onstage than in person on the same episode of The View.

“I’m just that way around you,” he says.

"It's kind of scary when you know... never mind"

While on Canada's Much More Music in 2004, Prince reiterates he isn't impressed by artists merely because they're famous. He likes talent, period.

"I'm most happy when people come up to me and say they were inspired by my music and they’re actually talented. It’s kind of scary when you know…never mind."

"Act your age, mama, not your shoe size"

The lyrics on Prince's 1986 hit "Kiss" was a reminder of Prince and The Revolution's often clever banter.

"Act your age, mama, not your shoe size, maybe we could do the twirl."

"Let's remember he did write 'My Humps'"

Will.i.am is one of the younger artists Prince befriended during his career. But that didn't mean Will was safe from Prince's musical criticism. Prince was quoted joking about the producer and Black Eyed Peas member's songwriting abilities on the group's hit single "My Humps" in the interview from a compilation of his funniest moments here.

"So he's very technology-driven. But let's remember he did write 'My Humps.'"

"Tell me a musician who's got rich off digital sales"

In the quote from the Guardian published in November 2015, Prince criticized the ways in which the internet has become a losing battle for some artists. Once again he shed light on issues bigger than him.

"Tell me a musician who's got rich off digital sales. Apple's doing pretty good though, right?"