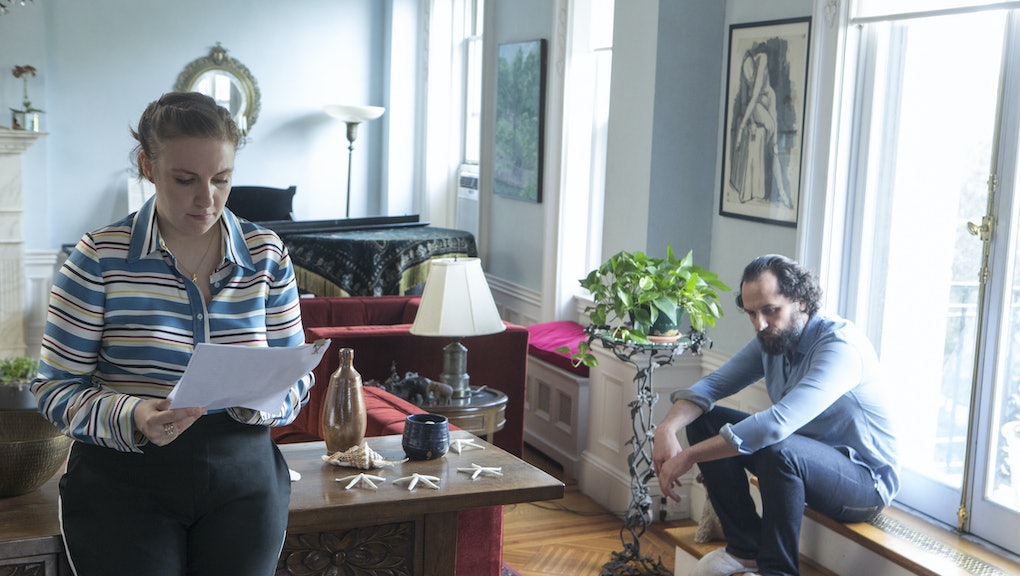 From the moment Hannah walks into what looks to be a swanky Upper West (maybe East?) side apartment, one could sense that episode three of the final season of Girls is up to something different. This is confirmed when Hannah enters the lavish apartment of Chuck Palmer, a famous (and fictional) writer played by The Americans' Matthew Rhys.

"American Bitch"  is a bottle episode much like Girls' season two entry "One Man's Trash." Both episodes see Hannah, alone, in the homes of two very different men. In "One Man's Trash" Hannah embarked on a short, contained affair with an older man named Joshua. Her meeting with Chuck, however, has a less romantic, albeit still dreamy quality to it. It ultimately functions to be a complex statement on consent, one that will undoubtedly be talked about in the days to follow its premiere.

Hannah is invited by Palmer to his apartment. She's written an article that has garnered his attention. She wrote about once worshipping him, but then finding him repulsive after learning that he has had questionable relations with college girls on his book tour, many which are rumored to be nonconsensual. The question that immediately arises: Why does she show up to this sleazy guy's apartment?

She's curious. Why would this famous writer, someone she revered, invite her to his home after she published an inflammatory article about him in a feminist website that's "not even the Times?" He thinks she's a good writer, and when Palmer first says this — and this is perhaps more obvious upon a second viewing of the episode — we see him doing exactly what he probably did to all of those college girls on his book tour. He's disarming them, making himself appear nonthreatening. Even before she meets him, he's doing this.

A back and forth between the two soon ensues, and the dream-like quality the episode takes on appears in its dialogue, which comes across as theatrical, in the same sort of way that "One Man's Trash" felt staged. But — in defense of this bottle episode, a bold one to have given there are only a few left before the show wraps for good  — "American Bitch" feels important for Hannah, who comes to see this writer with her mind already made up about him and leaves feeling confused, and perhaps violated.

Still, what makes the episode simultaneously fascinating and nerve-wracking is that Hannah continues to fall for his charm, even as she's defending the women who have spoken out against him. He calls her funny more than once, gives her a signed copy of a Philip Roth book she loves and in the episode's disturbing climax, asks her to lie with him in bed. He promises he's not up to anything, that it's just been some time since he's been with someone, and next thing you know his penis is out and she's grabbing it.

She immediately jolts up and lashes out at him, but before their argument can escalate, his daughter arrives home, leaving Hannah to her thoughts. She leaves the apartment and Palmer with this safe domestic scene of him bonding with his child. She spent the afternoon with someone who spent his time trying to convince her that he wasn't the monster she wrote about, that he was a human being with his own perspective and more to him. The thing is, and the horrible thing the episode leaves us with, is that there is more. Hannah was right. He is a creep, but he is also a creep who's a seemingly loving father.

She leaves shaken, vulnerable, and even though we don't see the other girls, we don't see Hannah's relationship with them, we know that after a traumatic afternoon like that, it's impossible not to be changed.