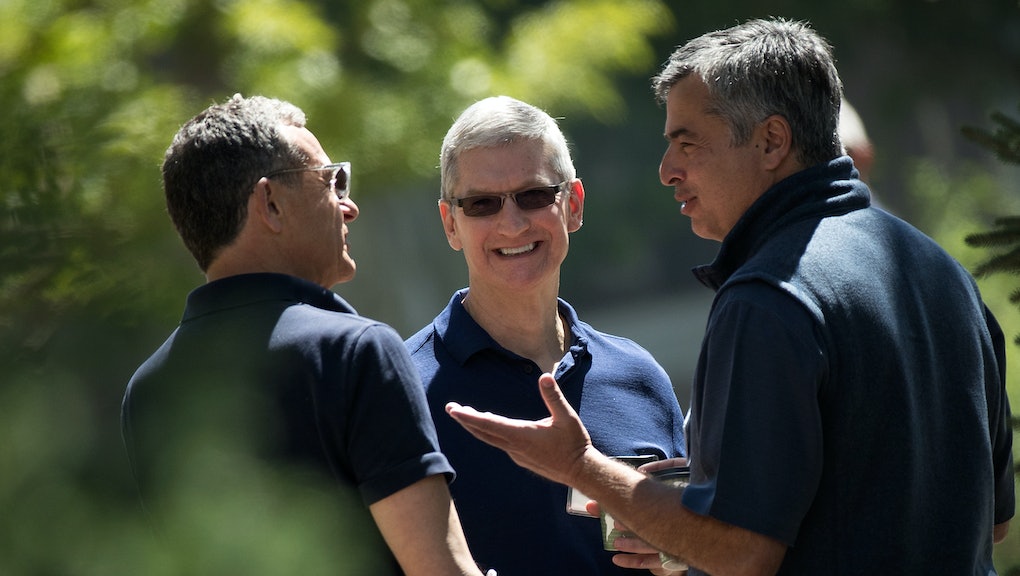 During Apple's shareholder meeting on Tuesday, the group will decide the fate of a proposal pushing for an "accelerated recruitment policy" to diversify the company's board of directors and senior management.

This is the second straight year investors floated the proposal. It comes at a time when Apple, like many other tech giants, is taking big steps toward more equal representation within the company. While there was an increase in global hires of women and people of color, leadership at Apple is still unchanged: It is 62% male, per the 2016 diversity report — the same as the year before. It is also 67% white. Put simply, leadership at Apple is where equal representation is needed most: These are the decision-making positions holding the most power.

But thanks to Apple's own leaders, it's not likely this proposal will pass. Apple's board — a group dominated by white men — has pushed the company to reject the initiative, one that would diversify its also predominantly white male leadership team, as seen below.

Furthermore, a shareholder's email obtained by Mic reveals that Apple has not responded to a request from an investor to work toward an agreement on the initiative. While a summary of the proposal exists online, below we've detailed specific approaches listed in the email.

Why Apple's board is against the diversity initiative

In an SEC statement, Apple's board asked that shareholders vote against Apple investor Tony Maldonado's proposal because the company has "broader" diversity efforts in place. These efforts include a $40 million partnership with the Thurgood Marshall College Fund and joining former President Barack Obama's ConnectED initiative, pledging $100 million to bring tech into underserved schools across the country, which throw money and support at the pipeline of new, young hires.

In a phone call, Maldonado, who is leading the proposal, explained why some investors are eager to improve this system. "Once you hit middle management and you're a person of color, it doesn't seem like there's a lot of opportunities out there as far as Apple is concerned," he said.

As to why the proposal was discouraged, Maldonado suggested, "Maybe managers and executives are entrenched in their thinking, [or] maybe they think they're being targeted."

Silicon Valley is throwing big money at its diversity problem. Will it work?

The tech industry has spent an estimated $1.2 billion over five years on various programs to help companies meet their diversity goals. But Michael Connor, executive director at Open MIC, believes this is an issue that isn't going to be solved with a flush of cash in the right places.

"It is more about your internal processes and how you structure your company and how you motivate your employees," Connor said. "That's where the solution is."

Silicon Valley has year after year released its diversity reports, marking yet another meager movement of the needle.

Yet, according to both Maldonado and Connor, Apple hasn't accepted their offers to have a candid conversation about the issue and to go over points listed in the shareholder proposal. Apple has also not responded to Mic's request for comment.

Mic obtained an email from an Apple shareholder under the condition of anonymity. The email, which was sent to legal counsel at the company, comprehensively details four approaches Apple can take to "accelerate and strengthen diversity outcomes." Included below are the four listed points.

The shareholder pointed to Microsoft, Intel and IBM in the tech industry as well as more than half of Fortune 100 companies in 2014 as adopting similar practices.

2. "Establishing a board refreshment policy that incorporates specific language to ensure racial diversity."

This point asked that Apple establish a committee that is dedicated to improving racial diversity within the company. This group would collect and share comprehensive data and give updates on progress.

4. "Regularly disclosing a more comprehensive set of metrics to shed light on existing challenges and to inform goals and activities."

The shareholder highlighted an expansion of Apple's public diversity reports, asking that it consider collecting, disclosing and assessing metrics related to where the company is obtaining talent from, its hiring rates, its attrition rates, its promotion rates, its tenure, its wages and roles. Rather than these diversity reports just looking at race and gender separately, as Apple and other tech companies' reports do now, the shareholder suggested Apple group the data by gender and race both separately and intersectionally, by employees with an H-1B Visa and by employee status.

The shareholder meeting is set to take place at 9 a.m. Pacific on Feb. 28 at Apple's Cupertino office.

"We are disappointed with Apple's reaction because their reaction has been: 'What we're doing is good enough; go away,'" Connor said. "Well, that's just not acceptable."